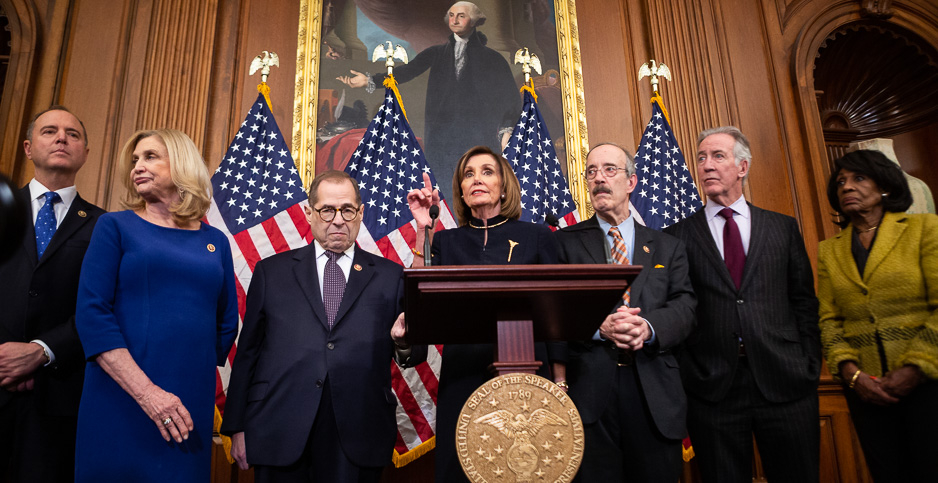 President Trump became only the third president in the nation’s history to be impeached last night in a highly partisan House vote that set the stage for a contentious Senate trial likely next year.

House Speaker Nancy Pelosi (D-Calif.) after the vote said she would not immediately send the articles of impeachment to the Senate, saying she wanted guarantees that it would conduct a fair trial. It added uncertainty to an already tumultuous political season.

"So far, we haven’t seen anything that looks fair to us," Pelosi told reporters at a press conference shortly after the House voted. "That would’ve been our intention, but we’ll see what happens over there."

Democrats approved an article of impeachment for abuse of power, 230-197, and a separate article for obstruction of Congress, 229-198.

Democratic Reps. Collin Peterson of Minnesota and Jeff Van Drew of New Jersey, who is expected to soon become a Republican, were the only members of their party to oppose both articles.

Maine Democratic Rep. Jared Golden voted against the obstruction charge but backed the abuse one.

Trump’s fury was hard to miss at the event as he lambasted Rep. Debbie Dingell (D-Mich.) and her late husband, John Dingell, the legendary former chairman of the Energy and Commerce Committee.

Trump said he gave the Dingells "A-plus treatment" when John Dingell died earlier this year, ordering flags to be flown at half-staff and other honors.

But noting that Debbie Dingell voted for impeachment, Trump then made a crass reference to John Dingell being in hell.

The congresswoman responded soon after via Twitter, calling on the president to set politics aside.

"My husband earned all his accolades after a lifetime of service," she wrote. "I’m preparing for the first holiday season without the man I love. You brought me down in a way you can never imagine and your hurtful words just made my healing much harder."

Senior Energy and Commerce Republican Fred Upton put out a statement of his own calling on Trump to apologize.

"I’ve always looked up to John Dingell — my good friend and a great Michigan legend," Upton tweeted. "There was no need to ‘dis’ him in a crass political way."

‘Short a trial as possible’

Reporters pressed Pelosi on whether she would withhold the articles of impeachment from the Senate to force that chamber into conducting a robust trial. Pelosi remained circumspect.

"We have legislation approved by the Rules Committee that will enable us to determine how we will send over the articles of impeachment," said Pelosi.

"It’s difficult to determine who the managers would be until we see the arena in which we will be participating," she said.

The Constitution offers only minimal guidelines, including that the trial be presided over by the chief justice of the Supreme Court, and leaves it to the Senate to set parameters. A two-thirds vote is required to remove the president from office.

It’s not clear what legislative work, if any, could be carried out during a trial. Rules require the Senate to give the trial top priority by meeting at 1 p.m. daily, except Sunday, until reaching a verdict.

McConnell has signaled he would prefer a short trial of no more than a few weeks and wants to hear opening arguments before deciding what witnesses or documents are needed. He said similar bipartisan rules were adopted for President Clinton’s impeachment 21 years ago.

But Schumer has sought an agreement for a limited number of witnesses, among them acting White House chief of staff Mick Mulvaney and former national security adviser John Bolton.

He has not proposed having former Energy Secretary Rick Perry, who played a role in Ukraine, testify — a sign that Democrats want to focus mainly on White House officials working most closely with Trump.

"Leader McConnell continues to push for no witnesses in the Senate trial. I have yet to hear an explanation why less evidence is better than more evidence, particularly when it comes to something as somber, as serious, as important as the impeachment of the president of the United States of America," said Schumer.

McConnell has also raised the ire of Democrats for asserting that his chamber will not remove the president, no matter what happens at trial.

Trump himself has repeatedly said he would welcome high-profile witnesses who would defend him — including Perry. But in recent days, the president has backed off from those claims, saying he would defer to Senate Republicans, who believe a short trial carries the least political risk.

Senate Judiciary Chairman Lindsey Graham (R-S.C.), Trump’s stalwart defender on Capitol Hill, told reporters yesterday that he wants as "short a trial as possible." He said there should be a direct vote on the articles rather than simply dismissing them on a motion.

Graham, who spoke with Trump over the phone yesterday, said he asked the president how he was feeling, and he replied, "Well, I’m being impeached, but other than that, I’m OK."

Among those missing the votes was Illinois Republican Rep. John Shimkus, the ranking member on the Energy and Commerce Subcommittee on Environment and Climate Change.

Shimkus — who opposes impeachment and is retiring at the end of this Congress — is in Tanzania visiting a son serving in the Peace Corps.

It not clear when a deal will come. The impeachment votes are among the last the House will take this year with the chamber slated to adjourn later today after passing the United States-Mexico-Canada trade deal.

Likewise, the Senate could adjourn for the holidays today after sending the president a year-end spending package to fund all federal agencies.

A lengthy, daylong debate over impeachment reprised many of the partisan arguments made during a two-month House probe that found Trump abused his office by tying U.S. aid to Ukraine to the Eastern European nation’s first launching a corruption investigation into his political rival, Joe Biden.

Democrats say Trump then obstructed Congress by blocking access to executive branch agencies and documents for their probe.

Democrats argued that Trump’s misdeeds left them no option but to impeach him, and warned that his actions would benefit Russia. Republicans argued that the investigation was little more than an attempt to overturn the 2016 election without evidence or allowing the president to defend himself.

"If we do not act now, we would be derelict in our duty. It is tragic that the president’s reckless actions make impeachment necessary," said Pelosi, who was on the floor for the entire debate.

"He gave us no choice. What we are discussing today is the established fact that the president violated the Constitution."

Georgia Rep. Doug Collins, the ranking Republican on the House Judiciary Committee, who has been a top defender of Trump, strongly disagreed.

"Democrats ran a sham investigation. This isn’t about facts," he said. "It’s about the clock and the calendar. It’s also about the Democrats trying to undo an election."

Details of the House investigation that found Perry was one of the "three amigos" charged with carrying out Trump’s controversial Ukraine policy were largely ignored during the debate.

Similarly, Hunter Biden, whose work for Ukraine energy giant Burisma Holdings Ltd. was behind Trump’s request for an investigation, was rarely mentioned.

The debate was more solemn than rancorous, with one exception being a near shouting match on the floor when Rep. Louie Gohmert (R-Texas) raised false allegations that Ukraine had interfered with the 2016 election and Democrats objected.

One protester dressed as Santa Claus held a sign warning Trump would be "getting impeachment in his stocking."