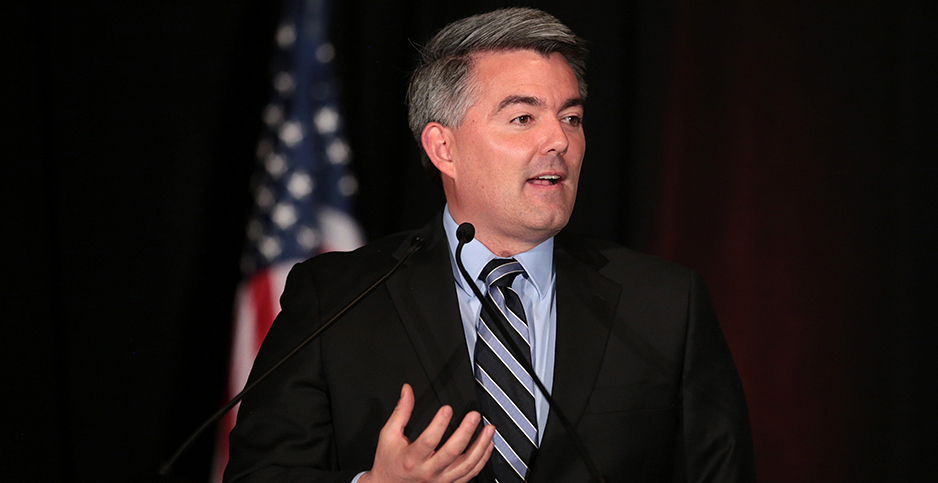 The Senate will soon take up public lands legislation backed by a bipartisan group of lawmakers, including Sen. Cory Garder (R-Colo). Gage Skidmore/Flickr

Senate legislation expected to be introduced today would designate up to $9.5 billion over the next five years to fix ailing national parks and public lands.

That’s $3 billion more than the original "Restore Our Parks Act," S. 500, requested, according to a draft copy of the new bill obtained by E&E News.

The new package, which the Senate is expected to take up after it finishes the energy innovation bill, would create a $1.9-billion-per-year national parks and public land legacy restoration fund from fiscal 2021 through fiscal 2025, totaling up to $9.5 billion.

The five-year trust fund, which would be divided among five agencies, would comprise up to 50% of otherwise unallocated revenue from all energy production on federal lands and waters. None of the money in the restoration fund can be used for land acquisition.

Under the bill, the National Park Service would receive the bulk of the aid — 70% of the funds — or roughly $1.3 billion per year beginning in fiscal 2021.

The Forest Service and Fish and Wildlife Service each would get 10%, or $190 million annually, while the Bureau of Land Management and Bureau of Indian Education would each collect 5%, or about $95 million annually.

The Interior and Agriculture secretaries must submit to the congressional authorizing and appropriating committees a priority lists of deferred maintenance projects within 180 days of the legislation’s enactment.

Additionally, the president would have to send a list of such projects and their estimated costs to Congress with the annual budget request.

The $3 million extra in the new stand-alone bill for reducing the maintenance backlog, and the inclusion of other land agencies beside NPS, is a victory for the bill’s supporters on and off Capitol Hill.

The "Great American Outdoors Act" would fully and permanently fund the country’s most important conservation program at a level of $900 million annually.

The provisions to fully fund LWCF, originally sponsored by Sens. Joe Manchin (D-W.Va.) and Cory Gardner (R-Colo.), would allow the government to spend the offshore oil and gas revenues deposited into LWCF without going through the appropriations process.

The "Great American Outdoors Act" would require the president to submit to Congress "detailed account, program, and project allocations of the full amount" as part of the administration’s annual budget request.

President Trump’s recent tweet supporting full LWCF funding and national parks gave momentum to a long-standing effort. The president may have been trying to buttress Gardner’s electoral fortunes, but advocates say they are glad to see the legislation moving forward, either way (E&E Daily, March 5).