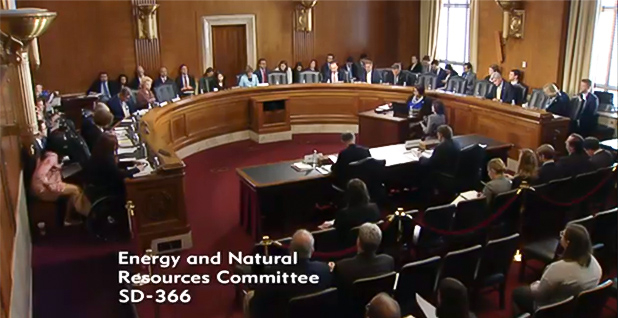 The Senate Energy and Natural Resources Committee approved two dozen bills this morning in rapid-fire fashion, with dissent from Democrats on only one related to liquefied natural gas exports.

That proposal, S. 1981, from Sen. Bill Cassidy (R-La.), would expedite the approval of small-scale gas exports.

The bill would automatically label applications to export up to 51 billion cubic feet of LNG per year as being in the public interest.

The Trump administration has already approved the export of more than 7 trillion cubic feet of natural gas per year, Cantwell said.

"Clearly, the department has already more than enough discretion to expedite LNG and does not need more. I believe S. 1981 goes too far," she said.

The bill passed the committee by a 13-10 vote, with only West Virginia Democrat Joe Manchin crossing party lines.

The other 23 bills passed by voice vote.

"It’s a pretty good start here, but it’s my intention to hold at least one more markup in the very near future to move additional bills through the committee in hopes of giving them a chance to pass on the Senate floor," said committee Chairwoman Lisa Murkowski (R-Alaska).

She called on Senate leadership to take notice, pointing out that more than 50 bills were previously approved by the panel that are still waiting for votes on the floor.

"Even the items that should move have a hard time getting across the finish line," she said.

The 23 bills passed by voice vote: