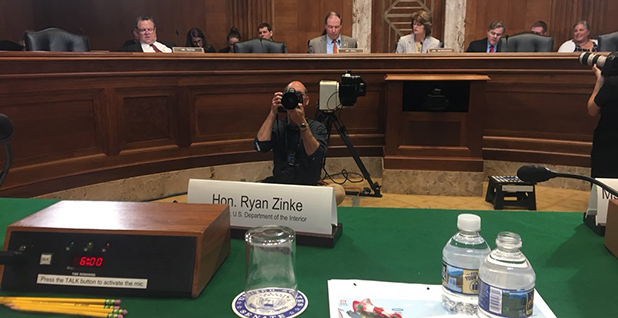 The Senate Interior, Environment and Related Agencies Appropriations Subcommittee today cleared a $35.9 billion spending bill to fund EPA, the Interior Department, Forest Service and other agencies for fiscal 2019. The committee is shown here during a hearing on the bill last month. @SecretaryZinke/Twitter

Senate appropriators quickly advanced by voice vote this morning a $35.9 billion fiscal 2019 spending bill for EPA, the Interior Department and related agencies, with bipartisan consensus and without any new "poison pill riders."

That total approved in subcommittee includes $32.6 billion in discretionary funding.

"We’ve assembled a package that both sides can support in committee, with the ultimate goal of taking the bill to the Senate floor," said Interior, Environment and Related Agencies Appropriations Subcommittee Chairwoman Lisa Murkowski (R-Alaska). "This has not happened since fiscal 2010."

"You’ve been able to take probably the most difficult set of issues of the subcommittees and work out a consensus," he said. "That’s what the Senate should do."

Murkowski told reporters after the markup that early on, she urged Sen. Richard Shelby (R-Ala.), who recently became the full committee chairman, to "please get this committee working again and get us to a process that we can work through."

Subcommittee Republicans and Democrats agreed to withhold amendments until the full committee votes on the bill Thursday.

The text of the legislation and the committee report will be made available publicly after the full committee markup.

"This cooperative effort is all the more important because of the abysmal document that is the president’s budget," he said.

Still, Udall said he continues to "feel strongly that the vast majority of EPA programs remain underfunded." The New Mexico Democrat also said he was disappointed that language he sought related to ethics did not make it into the bill.

"The bill also does not include a provision I requested that would make it a violation of appropriations law to use federal funds to break ethics rules and standards," Udall said. "I plan to continue working on this issue because I am frankly appalled at the level of ethics scandals plaguing this administration, especially at the EPA."

Like their House counterparts, Senate appropriators rejected the Trump administration’s bid to slash EPA’s budget by almost $2 billion. Instead, the measure approved today would keep the agency’s base allocation at this year’s level of $8.05 billion.

Interior overall would receive $13.1 billion for fiscal 2019 under the Senate bill, with increases for the Bureau of Land Management and the National Park Service, including more money to help NPS tackle its massive maintenance backlog.

The payments-in-lieu-of-taxes program would be fully funded under the legislation at $500 million, the same amount House appropriators provided for the popular program.

The Senate proposal would give LWCF $425 million in fiscal 2019, the same as the fiscal 2018 enacted level and $65 million more than the House measure.

"I specifically thank you for your priority on the Land and Water Conservation Fund at the 425 level, and the important step forward in national park maintenance backlog," Alexander told Murkowski and Udall.

The Senate legislation includes $14 million for Interior’s proposed reorganization, which is the same amount as in the House bill.

Programs like the Great Lakes Restoration Initiative, Chesapeake Bay cleanup and Diesel Emissions Reduction Act grants would largely be maintained at existing thresholds, albeit with some tweaks, according to a subcommittee staffer.

The bill would provide more than $760 million for water infrastructure and Superfund projects to bring total spending on EPA — at least as summarized by subcommittee Democrats — to about $8.8 billion.

The measure rejects the White House’s request for funding for buyouts to continue reducing EPA’s workforce, according to that summary.

The Senate bill also rejects the administration’s recommendation to cut the agency’s research budget by 45 percent, grants by 48 percent, and regulatory and enforcement programs by 25 percent, according to the Democratic summary.

The Senate fiscal 2019 spending bill reported out by the subcommittee this morning would provide funding for the following agencies, according to a summary provided by the majority:

The Senate legislation would provide $4.3 billion overall to fight wildfires, according to the Republican summary. That includes $2.5 billion for fire suppression at the Forest Service, housed in the Agriculture Department, and Interior.

The proposed spending level for wildfire suppression reflects lawmakers’ commitment in the fiscal 2018 omnibus spending bill to provide additional funding beyond the 10-year rolling average of wildfire costs until a new disaster funding mechanism is put in place in 2020.

That would avert "fire borrowing," in which the Forest Service has taken money out of non-fire-related accounts to cover rising wildfire expenses.

While the bill does not include any new policy riders, it continues a few from the fiscal 2018 enacted bill, which Udall expressed disappointment over.

Among those: a provision that prohibits EPA from regulating certain types of ammunition and fishing tackle, as well as an existing ban on listing the greater sage grouse as an endangered species.

The legislation also includes several EPA-related provisions that were wrapped into the fiscal 2018 omnibus spending act.

Most controversially, those include a requirement for EPA and other agencies to treat biomass as a carbon-neutral energy source. Others would continue to exempt small waste incinerators used in Alaska villages from Clean Air Act requirements.

While the exact text was not available today, the bill apparently also would keep language to protect farmers from needing Clean Water Act dredge-and-fill permits for certain activities.

Murkowski said riders typically have divided the committee, and her decision to keep the bill clear of new provisions reflected her desire to make the appropriation process work better.

"I can tell you for a fact there’s a lot of folks that are going to be very pleased with this bill but many who are going to look at it as, ‘Wait, you didn’t get my issue in,’ and that is a true statement," Murkowski, who also leads the Energy and Natural Resources Committee, told reporters after the markup.

"That doesn’t mean these issues aren’t important or significant, but we have chosen to try and return the appropriations process to that place where we truly are not authorizing on appropriating bills, that we are sticking with the appropriations. It makes it difficult, but I think it’s important for this process," the Alaska Republican said.