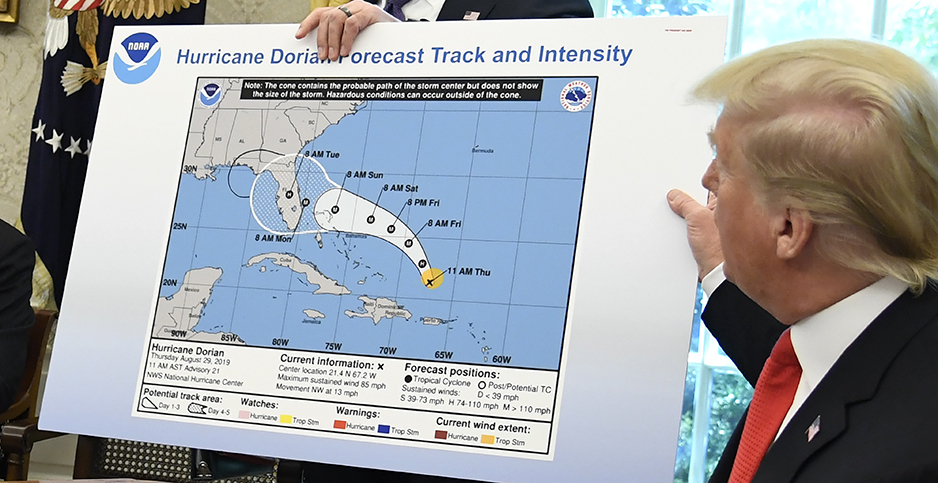 President Trump holds a map that shows the projected path of Hurricane Dorian last year. The map was altered with a black marker to put Alabama in the storm's possible trajectory; days earlier, Trump had tweeted incorrectly that Alabama was in Dorian's projected path. Mike Theiler/UPI/Newscom

Walsh, who has served as chief of staff for Commerce Secretary Wilbur Ross, played a central role in the scandal that became known as "Sharpiegate," when NOAA sided with the president after he used a doctored map to falsely argue that the path of the hurricane included Alabama. The map appeared to have been changed using a Sharpie marker.

The Commerce Department’s Office of Inspector General said earlier this month that Walsh had pressured top NOAA officials to side with Trump, telling Julie Roberts, then the agency’s communications director, in a telephone conversation at 2:30 a.m. Sept. 6 that "there are jobs on the line" (Greenwire, July 10).

That’s the same day NOAA issued its anonymous statement that said forecasters in Birmingham, Ala., had erred by challenging Trump. NOAA’s acting administrator, Neil Jacobs, told investigators that given "the amount of panic and concern, and getting called at 3 in the morning, it was pretty well implied that this was a fireable offense if you disobeyed."

Sen. Maria Cantwell (D-Wash.), the committee’s ranking member, told her colleagues that the IG report "was pretty damning of Mr. Walsh, showing that he was instrumental in the statement issued by NOAA questioning career weather forecasters’ information as it related to Hurricane Dorian."

Walsh’s nomination passed on a party-line vote, with no other senators addressing the issue.

According to a report by Inspector General Peggy Gustafson, Walsh became involved in the Dorian forecast after Ross asked him to handle the "Alabama situation." Ross had already expanded Walsh’s job as chief of staff by delegating to him the duties of general counsel in August of last year.

Ross was under pressure after he received an email Sept. 5 from then-acting White House Chief of Staff Mick Mulvaney, complaining that Birmingham forecasters appeared to have "intentionally contradicted the president."

"And we need to know why," Mulvaney told Ross in his email.

Walsh, who lives in Virginia, first joined the department as the deputy general counsel from O’Melveny & Myers LLP, where he served as a partner. He has degrees from Columbia Law School and Boston College.