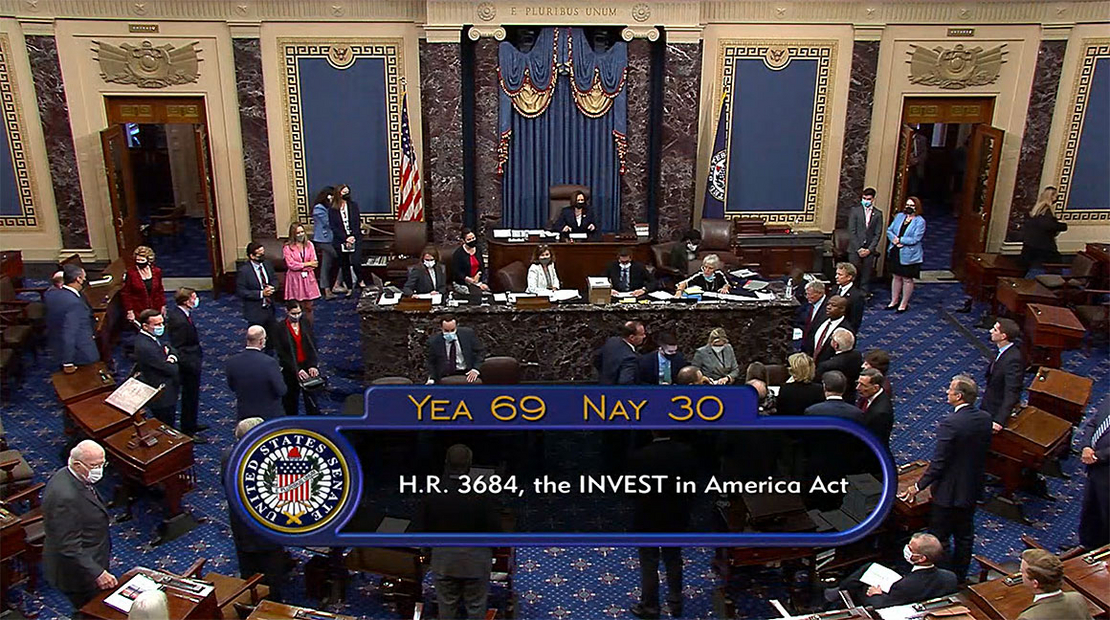 The Senate this morning approved a bipartisan infrastructure package with $550 billion in new spending. U.S. Senate

The Senate passed the bipartisan infrastructure bill today after more than a week of pained deliberations, sending it to an uncertain fate in the House and clearing the path for Democrats to take up a $3.5 trillion budget resolution.

Senators voted 69-30 to pass the $1.2 trillion legislation, with 19 Republicans voting in favor, including Minority Leader Mitch McConnell (R-Ky.). Several Republicans who had initially backed the deal with President Biden dropped off and opposed final passage.

Majority Leader Chuck Schumer (D-N.Y.) moved immediately after the vote to proceed to the budget resolution, kicking off the process for a massive reconciliation package that Democrats plan to use to skirt the filibuster and enact the rest of Biden’s policy priorities. The Senate voted 50-49 along party lines. Sen. Mike Rounds (R-S.D.) did not vote.

“The two-track strategy is proceeding full steam ahead,” Schumer said on the floor.

Consideration of the budget resolution will feature a marathon “vote-a-rama” today on nonbinding amendments that will offer the GOP a chance to get Democrats on the record on issues like the Green New Deal.

It’s possible that senators could bypass much of the 50 hours of debate on the resolution and start moving amendments, putting the chamber on a track to finish up as soon as tonight. But Republicans have already filed hundreds of amendments, including one from Energy and Natural Resources Committee ranking member John Barrasso (R-Wyo.) to effectively ban the Green New Deal.

“We’re going to argue it out right here on the floor at some length,” McConnell said this morning. “Every single senator will be going on record over and over and over.”

While the infrastructure bill is a win for Biden’s promises of bipartisanship, it represents just a fraction of the total sum the administration wants to spend to tackle climate change. And the process is far from over.

Its fate will now be inextricably tied to the reconciliation package, which is expected to include a clean electricity standard, climate spending and a hodgepodge of other progressive agenda items.

That complicates its future in the House, where Speaker Nancy Pelosi (D-Calif.) has pledged not to hold a vote on the bipartisan bill until the Senate passes a reconciliation bill.

“Whatever you can achieve in a bipartisan way, bravo. We salute it. We applaud it. We hope that it will pass soon,” Pelosi told reporters last week. “But, at the same time, we’re not going forward with leaving people behind.”

House moderates are largely happy with the bipartisan bill, with some pushing to take it up without the reconciliation package. But progressive green groups have for weeks blasted its lower spending levels and investments in carbon capture.

That has upped the pressure on House Democrats to make their own changes to the legislation that could result in a drawn-out negotiation with the Senate on the final product (E&E Daily, July 30).

Senate Environment and Public Works Chair Tom Carper (D-Del.) said today he would push for more on environmental justice and climate change in reconciliation. But, he added, the bipartisan bill “does a whole lot of good.”

‘It’s not fully paid for’

Still, the bipartisan bill, which includes $550 billion in new spending, would be a massive injection of cash for public transit, electric vehicles, climate resilience and energy. It includes $39 billion for transit, big cash injections for nuclear energy and carbon capture, and a revival of the Superfund polluter fee.

Infrastructure for electric vehicles would get $7.5 billion in the bill, and lead pipe removal would get $15 billion, both much less than Biden and environmental groups have called for, though Democrats expect to pump in more funding in the reconciliation package (E&E Daily, July 30).

Senators considered 22 amendments before passing the final product, but negotiations stalled out late last week, kicking the Senate into a holding pattern for much of the weekend as they waited on procedural votes to end debate (E&E Daily, Aug. 6).

Sen. Bill Hagerty (R-Tenn.) held up unanimous consent on further amendment proposals after the Congressional Budget Office found the bill would add $256 billion to the deficit over the next decade.

The bipartisan group of 10 senators that negotiated the bill argued the score did not fully account for the pay-fors they had laid out. But those concerns continued to bubble up in recent days, as some Republican senators affiliated with the group of 22 that initially backed the bill announced their opposition.

Adding to that calculus, particularly for senators up for reelection next year, is former President Trump, who today attacked McConnell for “working so hard to give Biden a victory.” Sens. Jerry Moran (R-Kan.), Todd Young (R-Ind.) and Mike Rounds (R-S.D.) have all announced their opposition in recent days.

Senate Minority Whip John Thune (R-S.D.), who had supported procedural motions on the bill, also said today he would vote “no.” Thune, who is up for reelection in 2022, said his position was unrelated to Trump.

“It’s not fully paid for, and some of the scoring on it makes me question whether or not the official score fully captures the amount of debt we’re adding,” Thune told reporters.