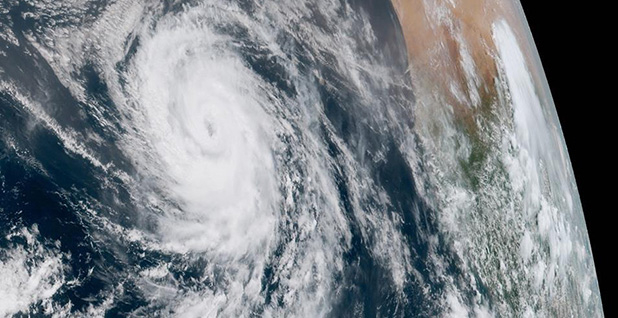 While few people were watching amid an unrelenting news cycle the past two weeks, Congress agreed to a bill that would make big changes to the way the Federal Emergency Management Agency does business.

A long-awaited compromise to reauthorize the Federal Aviation Administration, H.R. 302, includes a major set of reforms to address rising costs of disasters and help communities better prepare for hurricanes, floods, earthquakes, wildfires and other disasters.

The bill, which would also dole out $1.68 billion for victims of Hurricane Florence, passed the House by a wide margin last week and cruised through the Senate yesterday on a 93-6 vote.

The reform language would ensure a "sustainable, evergreen source of funding" for pre-disaster mitigation projects, which are generally funded haphazardly through the normal appropriations process, said Forbes Tompkins, expert on flood-prepared infrastructure with the Pew Charitable Trusts’ flood-prepared communities initiative.

Some proponents — namely some Democrats — see a connection to climate change: As hurricanes and wildfires get more intense with a warming planet, it only makes sense to make sure affected infrastructure is more resilient.

In 2017, natural disasters caused more than $300 billion in damage, and some research suggests that unusually warm water in the Atlantic spurred the intense hurricane season last year that included Hurricanes Harvey, Maria and Irma.

But the language is also wildly popular as a cost-saving measure, and it has support from a wide range of groups, from the U.S. Chamber of Commerce to Pew’s flood initiative.

While climate change may have a role in driving more intense disasters, the bill addresses larger cultural issues of how infrastructure is built, said Jeremy Gregory, executive director of the Massachusetts Institute of Technology’s Concrete Sustainability Hub.

In short, developers are building bigger and more expensive buildings in areas prone to flood, wildfire and other disasters, which drives up the costs of recovery.

"[Climate change] might be part of it, but I think there’s also a broader issue that we now currently build without properly considering the cost of dealing with future hazards," Gregory said.

The reforms are, in part, a version of the "Disaster Recovery Reform Act," which has been met with bipartisan acclaim since it was introduced last year by Rep. Lou Barletta (R-Pa.) as H.R. 4460.

Among other things, the measure would tweak the Robert T. Stafford Disaster Relief and Emergency Assistance Act to make sure more post-disaster assistance goes to future mitigation and more resilient building.

That language was part of a nearly yearlong push by House Majority Leader Kevin McCarthy (R-Calif.) and Minority Whip Steny Hoyer (D-Md.) in the wake of last year’s hurricane season.

It would allow as much as 6 percent of certain spending under the Federal Emergency Management Agency’s Disaster Relief Fund to go to a pre-disaster mitigation fund, which would award projects on a competitive basis. The measure would also aim to help communities adopt improved building standards.

That 6 percent may seem like a tiny fraction, but it’s not insignificant given the large scale of U.S. disaster spending, Tompkins said.

For instance, Tompkins said if that provision had been in place during the major disasters of 2017, more than $600 million would have been set aside for pre-disaster mitigation.

That money, in turn, would have gone a long way toward cutting down future costs. For every $1 the government spends on mitigation, it saves $6, according to research from the National Institute of Building Sciences, which was cited in various forms on the floor as lawmakers debated the bill.

In a letter to lawmakers last week, Geoffrey Brown, government relations director for Pew, wrote that the reforms would help remedy the fundamental problem that has long plagued the Stafford Act.

The law as it currently stands is centered around rebuilding communities as they stood before the disaster, rather than a "build back stronger" approach that would allow flood-prone buildings to relocate and other future risks to be mitigated, Brown wrote.

"Although Congress has amended the Stafford Act multiple times to allow for disaster recovery spending to include certain pre-disaster mitigation efforts, much of the nation’s disaster spending still involves rebuilding projects that fail to protect communities from future natural hazards," Brown wrote. "H.R. 302 addresses this long-enduring problem with a strong emphasis on pre-disaster preparation."

‘We keep legislating and no one cares’

The bill also includes other reforms, but proponents say there’s more work to be done on and off Capitol Hill.

A wide variety of groups, for instance, have called on Congress to overhaul the perpetually indebted National Flood Insurance Program, which is set to expire again Nov. 30.

Away from Capitol Hill, Gregory said his quest is to figure out better incentives for resilient building.

A big part of his research, he said, focuses on quantifying long-term costs associated with disaster damages so that developers can see what they’re getting into when they build a structure likely to last a lifetime.

"Culturally, for me, a big priority is to be able to create more market demand for hazard mitigation," Gregory said.

And although "DRRA" would be an improvement over current law, Gregory said he thinks there should be more conversations about how the federal government defines its role in preparing for disasters.

"To me, that’s kind of the interesting part about this, is that we still view FEMA as being about emergencies after disasters, rather than trying to make sure we’re better prepared," he said.

"The Disaster Recovery Reform legislation continues the momentum in this direction," Jacobson said in a statement. "Certainly, more can be done, but the DRRA is an important step."

Sen. Chris Coons (D-Del.) joked yesterday that with all the partisanship surrounding the allegations against Supreme Court nominee Brett Kavanaugh, it seems as if no one noticed the bipartisan agreement on "DRRA" and the FAA reauthorization measure.

As reporters swarmed him to ask about Kavanaugh, Coons said, "We keep legislating and no one cares!"