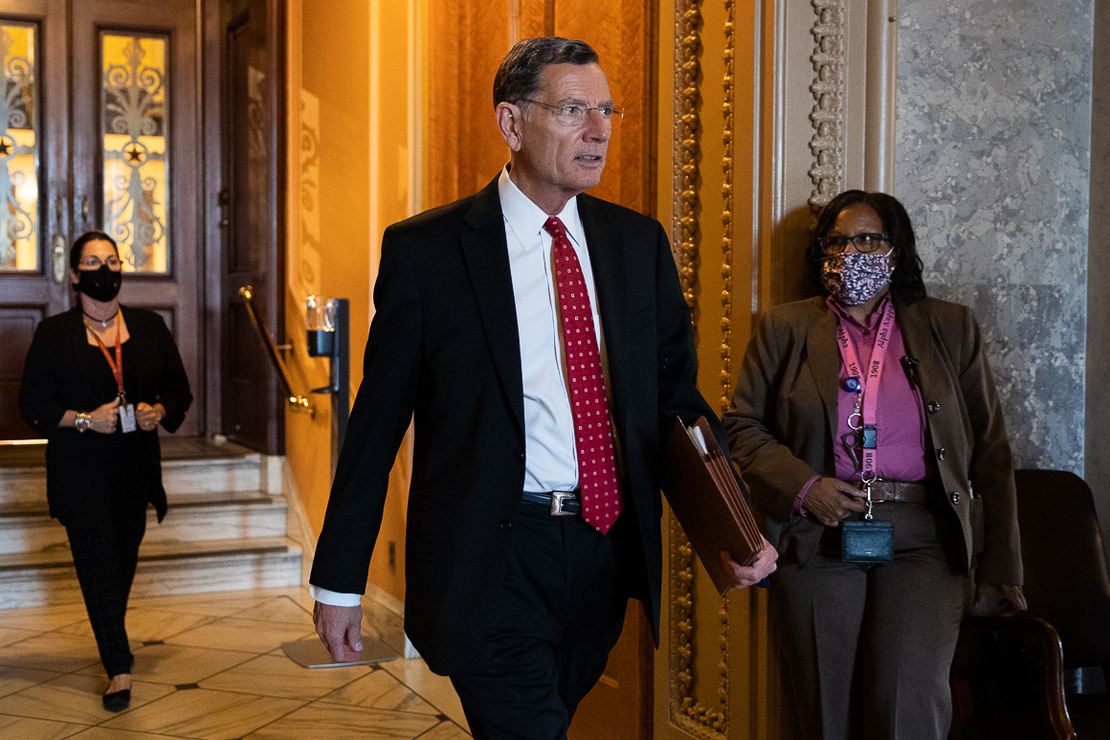 The Green New Deal took center stage this afternoon as the Senate launched a marathon of amendment votes to the $3.5 trillion budget resolution that Democrats are vowing to pass before the August recess.

Senators voted 99-0 to adopt an amendment by Senate Energy and Natural Resources Committee ranking member John Barrasso (R-Wyo.) that aimed to prohibit legislation or the development of regulations to implement the Green New Deal.

Democrats also flocked to support the amendment, which like the bulk of the hundreds of proposals filed, aims to put them on the record on a politically fraught topic. By all voting yes, Democrats looked to deny the GOP any political advantage.

During the March debate on the nearly $2 trillion COVID-19 relief package, the 50-50 chamber adopted a handful of controversial GOP amendments only to see Majority Leader Chuck Schumer (D-N.Y.) successfully strip the proposals from the bill before final passage with his own amendment.

In a joint statement this afternoon, Sen. Ed Markey (D-Mass.) and other Green New Deal sponsors decried Barrasso’s amendment as an effort to “politicize climate action right when we need it most.”

“The power of the Green New Deal has struck a chord in this country — Americans see how a Green New Deal can transform our economy and democracy to address climate change," said the statement. "This amendment is a tired and failed Republican attempt to throw speed bumps on the road to climate action.”

The Senate further delved into climate policy this afternoon when it adopted an amendment by Senate Environment and Public Works Chair Tom Carper (D-Del.) that would allow for changes to the resolution to enact policies to address climate change.

Carper urged the adoption of his amendment to address the “code red” situation detailed in this week’s sobering report from the Intergovernmental Panel on Climate Change. The proposal was adopted 51-48, with Maine Republican Sen. Susan Collins joining all Democrats in supporting it. Sen. Mike Rounds (R-S.D.) did not vote.

Senators voted 49-50 against an amendment by Sen. Cynthia Lummis (R-Wyo.) that aims to cancel the Biden administration’s pause on oil and gas leasing on federal lands. Doing so, said Lummis, would lower gasoline prices and reduce dependence on OPEC.

Later this afternoon, the chamber will vote on a proposal from Sen. Kevin Cramer (R-N.D.) that would bar the White House Council on Environmental Quality and EPA from promulgating rules or guidance that would ban hydraulic fracturing in the United States.

The vote-a-rama is expected to continue into the early hours tomorrow morning, with hundreds of amendments having been filed at publication time. Once the budget resolution passes, the chamber is expected to head out for the August recess, returning after Labor Day.