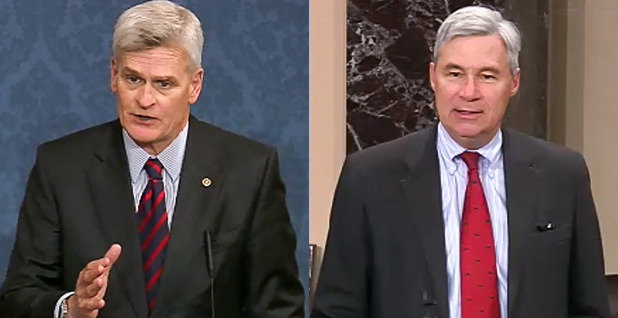 After delivering more than 200 Senate floor speeches warning Americans it’s "time to wake up" to the risks of climate change, Sen. Sheldon Whitehouse hit a key milestone Tuesday in his yearslong campaign: He was joined by a Republican.

"This is a big moment for me to have this be the first bipartisan ‘Time to Wake Up,’" the Rhode Island Democrat said, referencing the presence of Republican Sen. Bill Cassidy.

Louisiana’s senior senator had just delivered his own remarks about Whitehouse’s visit to the Bayou State where he saw firsthand the vanishing coastline.

Cassidy has in recent years positioned himself as a climate-conscious Republican. He did not shy away from the association, referencing Whitehouse’s infamous "wake up" poster during his own speech.

"Everyone in Louisiana is very awakened to this crisis," he said.

During their speeches, the senators described Louisiana’s infamous coastal erosion. It is related to flood-control projects along the Mississippi River and subsidence from offshore oil and gas production, but also exacerbated by sea-level rise from climate change.

Cassidy touted his work to send a share of federal offshore drilling revenues home to Louisiana, which under state law must be used for a coastal resiliency plan.

Whitehouse in turn noted the similarities between their home states, both of which he described as "lively, diverse, coastal, proud, a little bit eccentric," and he made sure to note they both "have great food,"

He also recalled Louisiana’s "shredded coast" that he saw from the air during his tour last month.

During his visit, Whitehouse was joined by Rep. Garret Graves (R-La.), the one-time chairman of Louisiana’s Coastal Protection and Restoration Authority and current ranking member on the House Select Committee on the Climate Crisis.

A previously scheduled operation to repair an arm injury prevented Cassidy from joining that tour, although he and Whitehouse met for dinner during his visit.

Whitehouse said yesterday Cassidy is "keenly aware" of the near- and long-term risks climate change poses to his state.

"His governor has already declared the whole Louisiana coast a state of emergency because of sea-level rise issues, and they are losing enormous amounts of their physical state daily as sea levels rise," he told E&E News. "So I think he is well-positioned to take the climate change issue seriously and be a part of a solution."

Whitehouse declined to comment on whether he and Cassidy have discussed climate legislation, saying he doesn’t discuss private conversations.

But during his floor speech, Cassidy said he and Whitehouse are having talks about revenue-sharing legislation that would hand states a portion of federal offshore wind revenues to fund coastal resiliency.

That’s similar to the model created by the 2006 law that allows Louisiana and a handful of other states to share offshore drilling revenues, and one that Cassidy suggested yesterday could be applied nationwide.

"We know that sea levels are rising, so what do we do to prepare for it and to mitigate that which otherwise might occur?" Cassidy told E&E News, noting that the National Flood Insurance Program and the Army Corps of Engineers are among the federal entities that have to "pick up the pieces" after extreme weather events.

He’s talked to members of the House and Senate about creating a "Coastal Caucus" that would aim to create a federal revenue stream to support coastal resiliency efforts nationwide.

While Cassidy said it’s too early to determine whether he and Whitehouse will team up on broader climate legislation, he said the two have agreed to continue highlighting the risks of sea-level rise.

"It’s probably premature to say we’re going to be in lockstep or even going to be in unison [on climate policy], but I think it’s certainly clear to say that we both think that the coastal communities are under threat," he said.