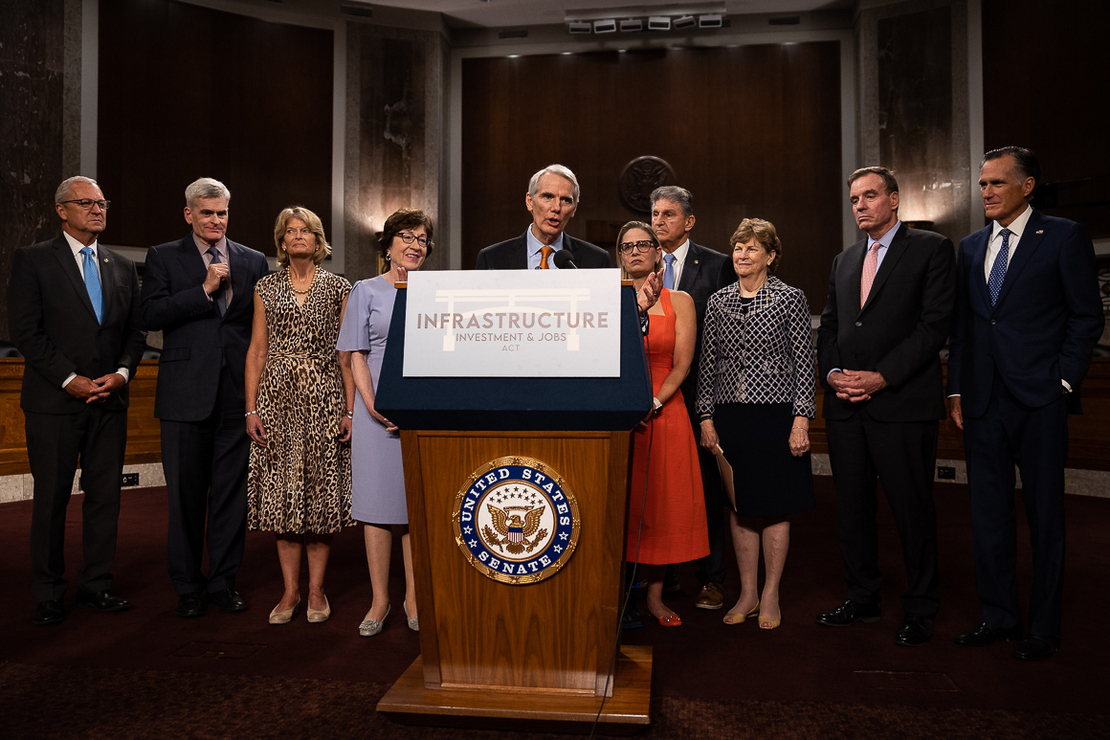 The Senate voted last night to begin debate on the bipartisan infrastructure agreement announced yesterday, moving a top priority of President Biden’s along to an uncertain future.

Senators voted 67-32 to end debate on the motion to proceed to the bill, which was still being written last night. All 50 Democrats supported the motion, along with 17 Republicans.

But other Republicans decried the rush to the vote, noting that there’s still no legislative text. Sen. John Cornyn (R-Texas) complained about being presented a detailed outline of the plan by a small group of negotiators like it’s a fait accompli.

“Until this bill is actually written and we have a chance to review it, including all the details, the costs, the pay-fors, and the impact it will have on our states, I will not support it,” he said on the floor before the vote. “And I imagine the majority of my Republican colleagues feel the same way.”

He added, “We need an open amendment process.” But its unclear how many amendments will be allowed, with Senate Majority Leader Chuck Schumer (D-N.Y.) calling for passage as soon as possible.

One Republican closely involved in the negotiations — Louisiana Sen. Bill Cassidy — said he was surprised at the relatively positive reception the deal received in his caucus yesterday.

Among the Republicans who voted to open debate last night was Senate Minority Leader Mitch McConnell (R-Ky). In a statement ahead of the vote, he said he had gotten a commitment from Schumer that a substitute amendment from Sens. Rob Portman (R-Ohio) and Kyrsten Sinema (D-Ariz.) — two of the lead negotiators on the package — would be the measure senators would pursue.

Schumer, for his part, reiterated that the Senate will pass both the bipartisan deal and the $3.5 trillion budget resolution, meant to launch the reconciliation process for other Democratic priorities, before departing for the August recess. “It might take some long nights,” he said after the vote. “It might eat into our weekends. But we are going to get the job done. We are on track.”

As expected, the bipartisan bill contains the bulk of several bills that have advanced in the chamber with strong bipartisan support, including the Environment and Public Works-passed highway bill, S. 1953 (Greenwire, May26); the Commerce, Science and Transportation panel’s rail and safety title, S. 2016 (E&E Daily, June 17); the Energy and Natural Resources Committee’s recently approved energy package, S. 2377 (E&E Daily, July 15); and the $35 billion water infrastructure package, S .914, that passed the Senate in April (E&E Daily, April 29).

To pay for the $550 billion in new spending in the plan, the bill will cobble together an assortment of offsets, according to a summary obtained by POLITICO. Despite White House resistance to repurposing COVID-19 relief funds, the deal will rely on $205 billion in previously appropriated pandemic assistance. It counts on $53 billion from states returning enhanced federal unemployment benefits passed during the pandemic.

The deal also assumes $13 billion from reinstating the expired Superfund taxes, which lapsed in 1995. It additionally aims to raise $6 billion through sales from the federal Strategic Petroleum Reserve — a recurring pay-for in recent years that has drawn controversy.

Should it get through the Senate, the bill will face tough scrutiny in the House, where Transportation and Infrastructure Chair Peter DeFazio (D-Ore.) has been highly critical of the surface transportation and water provisions.

Additionally, the Congressional Progressive Caucus fired another warning shot at the Senate agreement yesterday, saying it “does not have a path forward in the House unless it has a reconciliation package, with our priorities, alongside it.”

“We look forward to seeing the progress made by the twenty senators,” CPC Chair Pramila Jayapal (D-Wash.) said in a statement. “But the votes of Congressional Progressive Caucus members are not guaranteed on any bipartisan package until we examine the details, and until the reconciliation bill is agreed to and passed with our priorities sufficiently funded.”

But the bipartisan package drew praise from the moderate House Democratic Blue Dog Coalition. “After months of negotiations, the Senate’s bipartisan infrastructure is an important achievement for President Biden’s agenda, and it demonstrates that lawmakers from both parties can come together to work in the best interests of the nation as we rebuild from the pandemic,” said Blue Dog Co-Chair of Communications Abigail Spanberger (D-Va.) in a statement.

Looking to the next bill

Democrats and environmentalists made clear that they’re looking to the reconciliation bill to make good on Biden’s climate promises. Sen. Ed Markey (D-Mass.) called the bipartisan plan a “good start” but stressed that it’s not enough.

“We’re going to deal with the climate crisis in the magnitude, scope and scale that’s required in the reconciliation,” said Markey, referring to a strategy favored by many Democrats of make large climate investments in the budget deal (see related story).

Sen. Martin Heinrich (D-N.M.) said he’s especially pleased that the bill would invest $73 billion in the nation’s power infrastructure, which he said would help speed deployment of clean energy.

“We don’t currently have strong connections between where new clean energy and development projects go and the places where they use that power, because our entire grid was built for a time when we were connecting dams and coal to those load centers,” he said. “So now we have to connect wind and solar to those load centers.”

While welcoming the spending on power infrastructure, Heinrich said the reconciliation bill will be vital because it is expected to lay out a national clean energy standard.

“Some of this stuff can be done with funding … but we have to create the structural incentives (like CES) to clean up the energy supply as well,” he added.

Senate Budget Chair Bernie Sanders (I-Vt.), a leading progressive voice who has pushed for a broad infrastructure bill, called the bipartisan deal a “work in progress.” He declined to say when the $3.5 trillion budget plan he is crafting would be released, though he said he expects to have 50 votes for it.

Sen. Chris Van Hollen (D-Md.), also a Budget Committee member, said, “The details of what the heck the thing is going to look like remain in play,” but he said the Senate approval to move ahead on debating the infrastructure bill is a “step in the right direction.”

Van Hollen said the budget reconciliation bill is “moving forward very well,” but pressed for specifics, he would say only that it would come out “soon after” the infrastructure deal passes and before the Senate leaves for August recess.

One critic of the deal — former President Trump — last night slammed Republicans who supported it, saying it “sets an easy glidepath for Dems to then get beyond what anyone thought was possible in future legislation.”

“Hard to believe our Senate Republicans are dealing with the Radical Left Democrats in making a so-called bipartisan bill on ‘infrastructure,’ with our negotiators headed up by SUPER RINO Mitt Romney,” Trump said in a statement. “This will be a victory for the Biden administration and Democrats, and will be heavily used in the 2022 election. It is a loser for the USA, a terrible deal, and makes the Republicans look weak, foolish, and dumb. It shouldn’t be done.”