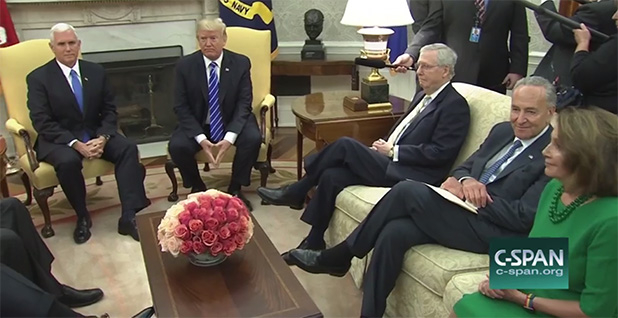 President Trump yesterday struck an agreement with congressional Democrats to temporarily clear the decks of several major fiscal fights, brushing aside the objections of top Republicans and leaving the Capitol collectively scratching its head over the dizzying turn of events.

Under the deal, Congress would simultaneously pass assistance for areas affected by Hurricane Harvey, as well as an extension of the debt limit and a continuing spending resolution through Dec. 15 to keep the government running while negotiations continue on appropriations.

The Senate is set to debate the matter today. It also includes a short-term extension of the flood insurance program.

"Both sides have every intention of avoiding default in December and look forward to working together on the many issues before us," Senate Minority Leader Chuck Schumer (D-N.Y.) and House Minority Leader Nancy Pelosi (D-Calif.) said in a joint statement.

"I think that’s ridiculous and disgraceful that they want to play politics with the debt ceiling at this moment when we have fellow citizens in need," Ryan told reporters ahead of the meeting with Trump.

Republican leaders were aiming for a longer extension of the debt limit in order to avoid the possibility of a default sparked by intraparty fiscal disagreements. They too wanted to limit Democratic leverage in talks.

Also, even before the pact, conservatives were balking at combining Harvey aid with anything else. On the debt ceiling, they wanted to win spending concessions from leaders.

FreedomWorks, the Club for Growth and other outside conservative groups issued a letter to House leaders saying they will "strongly oppose any attempt to raise the national debt limit without significant reforms that put our nation on a path to fiscal balance."

Trump himself confirmed the terms of the agreement, telling reporters on Air Force One that he had "a very good meeting with Nancy Pelosi and Chuck Schumer," without mentioning Ryan or McConnell.

Asked about the disconnect between Ryan’s comments about the Democratic proposal and Trump’s embrace of it, McConnell emphasized that it was the president who agreed with Pelosi and Schumer.

"We have this emergency created by Harvey and [Hurricane] Irma, which must be addressed this week," McConnell told reporters. "We have the debt ceiling expiring because there’s more borrowing the secretary of the Treasury needs to do than the current debt ceiling allows him. If this isn’t the definition of an emergency, I don’t know what is."

Pressed over Trump’s decision to side with Democrats over his own party, McConnell said — like several times before — that the president "can speak for himself."

But McConnell added that Trump’s "feeling was that we needed to come together, to not create a picture of divisiveness at a time of genuine national crisis." The leader yesterday took legislative steps to advance the plan.

Schumer called the agreement "a really positive step forward." He told reporters, "It’ll work to quickly provide aid to those hurt by Harvey, it’ll avoid default, and it’ll fund the government, avoiding a shutdown. And we all agreed we’d work together in December as well to avoid a default."

House Republicans from Texas and elsewhere yesterday celebrated House passage of a clean $7.85 billion aid package for Harvey shortly after noon. News of the deal was only starting to spread.

Rep. John Culberson (R-Texas) said, "The message is: Help is on the way."

Rep. Blake Farenthold (R-Texas) reiterated that the present Harvey package will be "the first of several," noting that it was intended to shore up the Federal Emergency Management Agency’s disaster account, which he said has been drained of roughly $2.5 billion since last week because smartphones have made it easier to sign up for federal assistance.

Rep. Mike Simpson (R-Idaho), the chairman of the House Energy and Water Appropriations Subcommittee, said he expects emergency wildfire spending for the Forest Service to be attached to the next package of Harvey aid or for Hurricane Irma, which battered the U.S. Virgin Islands and Puerto Rico and is now menacing the Eastern Seaboard.

"They’ll be more disaster relief coming up obviously, and I would suspect wildfire would be part of that," Simpson said. The congressman said he expected to meet next with new Forest Service Chief Tony Tooke to determine the need.

House Natural Resources Chairman Rob Bishop (R-Utah), who has backed legislation to create a permanent funding stream for fighting wildfires, stopped short of saying any shortfall should be attached to storm relief legislation.

"You don’t want to start down the slippery slope of Christmas-tree-hood. There are other mechanisms we have to deal with on this issue," said Bishop, who favors using FEMA dollars for wildfires rather than shifting money among Forest Service accounts.

Bishop is meeting with aides to determine what role, if any, his committee would have in a federal response to Irma. The panel has oversight over the territories.

Despite agreement on storm funding, the unexpected turn of events surrounding the Trump deal left Republicans feeling as if Democrats had snatched political leverage from the series of looming fiscal deadlines.

"The Pelosi-Schumer-Trump deal is bad," read a statement by Sen. Ben Sasse (R-Neb.) in its entirety.

The agreement — unveiled in bill form as H.R. 601 — would punt several high-profile issues to right before the extended December recess.

Schumer said Democrats are going to "fight hard" to authorize the Obama-era Deferred Action for Childhood Arrivals program, which allows the children of illegal immigrants to apply for two-year work permits to stay in the United States.

"We believe if we keep up the fight, we will succeed," Schumer said, speaking one day after Trump announced he will end the program within six months.

And while the president retreated from his threat to shut down the government if necessary to secure funding for his border wall with Mexico, he suggested yesterday that a deal could address both DACA and the wall.

"I’d like to see something where we have good border security, and we have a great DACA transaction where everybody is happy and now they don’t have to worry about it anymore," he said aboard Air Force One.

House Rules Chairman Pete Sessions (R-Texas) told reporters he would never "second-guess" the president on his decision to reach a deal with Democrats on the three-month extensions.

But, he said, "of course" it would make negotiations late in the year more difficult with the debt ceiling now part of the equation.

Simpson made clear he was no fan of plans to extend the debt ceiling by only three months. "Yeah, let’s do it again, every day we can vote on the debt limit," he said sarcastically.

Congress faces a long road to resolving fiscal 2018 funding, too. While the House yesterday dug into its eight-bill omnibus (see related story), the Senate remains far behind in advancing its own individual spending bills.

Sen. Tom Udall of New Mexico, the top Democrat on the Appropriations subcommittee that funds U.S. EPA and the Interior Department, said discussions continue on assembling that bill, which he said would be marked up this month.

"We’re still working on that," he told reporters yesterday.