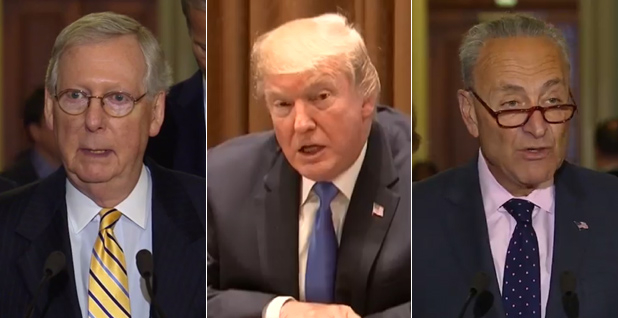 The Senate this week will look to wrap up the annual defense authorization bill, while the Finance Committee is getting the ball moving on tax reform against a ticking clock and mounting political pressures.

A series of votes are planned this evening on the National Defense Authorization Act after lawmakers passed a procedural measure to limit debate last week.

The amendment deal ironed out Thursday has measures on energy security and perfluorinated chemicals. It also includes a provision from Sen. Elizabeth Warren (D-Mass.) on cyber vulnerabilities to the electric grid (E&E Daily, Sept. 15).

Senate Majority Leader Mitch McConnell (R-Ky.) last week also filed cloture on the nomination of Noel Francisco to be solicitor general (see related story), but it’s unclear what else the Senate may take up during what will be an abbreviated work week because of the Jewish holiday of Rosh Hashanah. The House is out all week.

The Finance Committee tomorrow morning will hold a hearing on reforming the business side of the tax code, as the panel looks to produce a legislative package within weeks. Congressional leaders and the White House are pressing furiously with a quick timetable for completing the first major tax reform legislation since 1986.

After months of fighting over the House plan to slap a 20 percent import tax on products entering the United States — jettisoned over the summer after it became apparent it wouldn’t pass the Senate — dozens of conservative critics of the so-called border adjustment tax (BAT) last week pledged support to push tax reform to completion this year.

Tim Phillips, head of the Koch brothers-funded Americans for Prosperity (AFP), promised an "all-out effort" on taxes. "This is our top priority to get this done and to get it done now," he told reporters Thursday.

While there’s broad desire among Republicans for tax reform, the hurdles to the finish line are many and arduous, despite unity for lower rates and a simplified code.

Lawmakers, the Trump administration and outside interest groups say there is much agreement on many areas, but the same internal divisions that have constrained GOP efforts to legislate on health care and fiscal matters are already on display on taxes, as well.

"I sincerely doubt that we will be able to get to that level on corporate tax rates," he said on CNBC.

While the BAT fight has been resolved, the same groups that dug its grave are now targeting another House GOP plan to allow "full and immediate" expensing of business investments. AFP argues instead that tax writers should focus on lowering rates "as low as they can go."

Further complicating matters is competing proposals from internal House GOP factions. The conservative Republican Study Committee is expected to release its own plan this month, and the rabble-rousing House Freedom Caucus has made clear it plans to imprint its own views on the debate.

With tax reform looming, a handful of incentives affecting the coal, nuclear and renewable sectors remain anxiously awaiting their fate.

A push to boost the existing value of a key credit for carbon capture and sequestration is among the top priority for many lawmakers from both parties (E&E Daily, Sept. 15).

North Dakota’s Heidi Heitkamp, one of a handful of Senate Democrats that Trump is courting on tax reform, is in discussions over CCS allowances with administration officials.

A similar push to help the ailing nuclear industry by tweaking its production tax credit also enjoys bipartisan backing, but there’s little appetite in the Senate for taking it on ahead of the broader reform push.

Democrats have made it clear that the nuclear provision should be paired with a fix for the renewable investment tax credit, which was extended and phased down for solar in 2015 but did not apply to other renewable sources, including small wind power, combined heat and power, and fuel cells, among other technologies.

That omission has been characterized as a misunderstanding, but efforts to correct it languished in the last Congress despite McConnell’s pledge for a fix.

"I’d like to see them go forward together," Sen. Tom Carper (D-Del.), a Finance Committee member and supporter of the nuclear tax bill, said last month of the "orphaned" renewables.

While top White House officials and lawmakers are still seeking agreement on the broad contours of reform — including the president making speeches and meeting with lawmakers — interest groups continue to press their cases for sector-specific breaks.

The conservative-leaning Citizens for Responsible Energy Solutions last week urged the House to include all of the bills for CCS, nuclear and renewables in its tax package.

The Alliance to Save Energy urged the Finance Committee in July to weigh energy savings as it rewrites the code, which "includes no meaningful provisions that incentivize energy efficiency" after key breaks expired in January.

One sign of tax reform’s viability will be whether the House can pass a budget resolution when it returns next week. The budget, key to unlocking the reconciliation process that would allow the bill to pass the Senate without the threat of a filibuster, has been stuck for weeks as GOP leaders try to corral votes among various factions.

If broad reform is a heavy lift, anti-tax advocate Grover Norquist suggested last week that a "dramatic pro-growth tax cut" would be a palatable option, adding that Republicans will pay a heavy political price in 2018 and 2020 if they fail.

"In 2018, we’re unlikely to elect a House and a Senate that will continue further tax reform, that will give us any effort at reforming entitlements or that will do the deregulation that we need," Norquist told reporters Thursday.

Also hanging over the weighty fall to-do list, which includes spending and budget matters, health care and immigration, is the unexpected alliance between Trump and congressional Democratic leaders, who cut a deal this month to prevent a government shutdown and raise the debt ceiling until December.

The deal blindsided Republicans and undercut its leadership, and shocked the Capitol. A private dinner including Trump, Senate Minority Leader Chuck Schumer (D-N.Y.) and House Minority Leader Nancy Pelosi (D-Calif.) further fanned GOP fears after the trio reported progress on legislation that would save hundreds of thousands of young immigrants from deportation.

Speaking about Trump, Schumer was heard on a hot Senate mic last week saying, "He likes us. He likes me anyway."

Rep. Mike Simpson (R-Idaho), who chairs the House Appropriations subcommittee with jurisdiction over the Energy Department, said that conservatives who believed the president is a Republicans were "misled."

"I don’t look at him as a Republican or Democrat. I look at him as the president, and he’s going to do what he thinks is best, and that’s OK with me," Simpson told reporters last week. "I’ll agree with him sometimes, sometimes I won’t. I don’t think he follows Republican orthodoxy by any stretch of the imagination, so conservatives saying, ‘Oh, he’s going back on us.’ No, he’s not."

Freedom Caucus Chairman Mark Meadows (R-N.C.) acknowledged last week that it "makes headlines" when the president hosts the minority leaders of Congress but said Trump is following the script from his real estate career.

"I think the president is doing what he does best — talks to everyone, gets great input, ultimately makes a decision based on input from a variety of sources," Meadows told reporters last week. "That’s what he’s done over his career. I’ve seen him do it in the first nine months of his administration, and I don’t know that this is a change."

Pelosi, who last week acknowledged the "atmospherics" of her and Schumer’s dinner with Trump were "very friendly," was cautious when asked if Democrats’ recent inroads with the president would last.

She noted the potential for some "common ground" on infrastructure and trade, as well as Trump’s stated support for not deporting the "Dreamers." She characterized immigration as a trust-building exercise for Democrats and the president that could lay the framework for other issues.

"I think it’s a one-by-one thing," Pelosi told reporters. "I do think that, one by one, you establish more understanding of whether, in the president’s case, understanding of the legislative process, and on our part, what some of his priorities might be, as we go forward."