Senate to work the weekend after amendment talks crumble 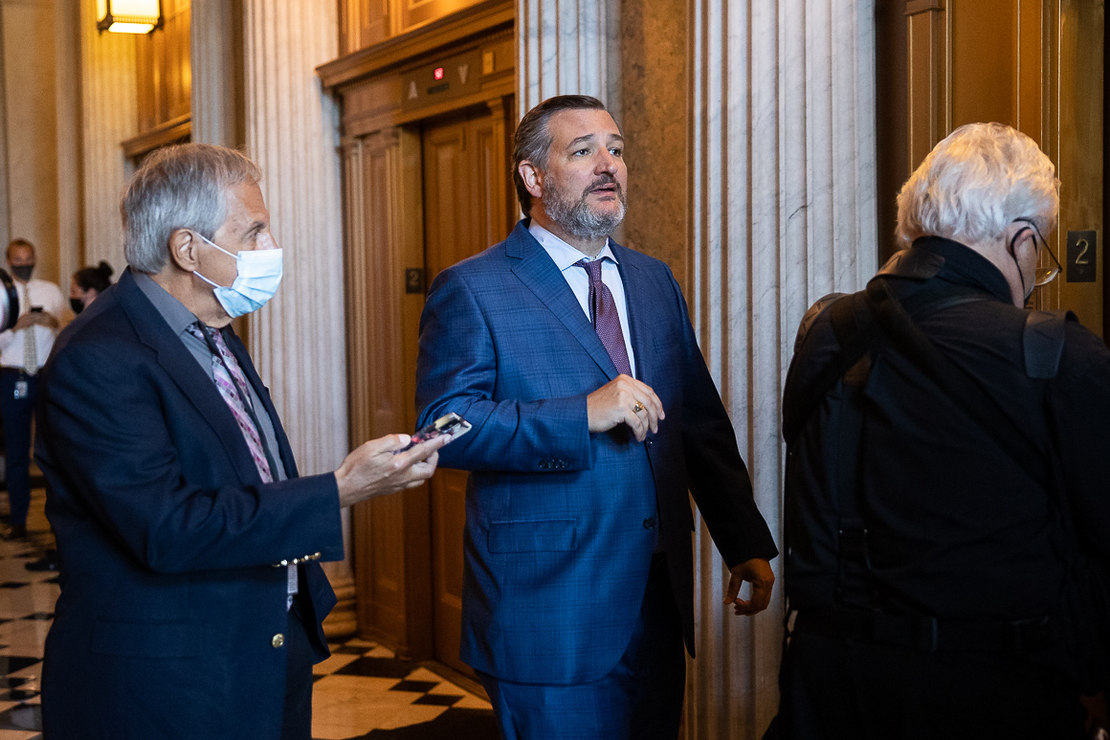 Sen. Ted Cruz (R-Texas) at the Capitol yesterday. He has been among the Republicans most critical of the bipartisan infrastructure deal. Francis Chung/E&E News

The Senate is set to wrap up work on the bipartisan infrastructure and energy bill this weekend after amendment talks crumbled late last night amid an objection about deficit spending from a Republican senator.

Senators have already considered 22 amendments to the legislation, which includes $550 billion in new spending. They spent yesterday in a holding pattern, as leaders of both parties sought unanimous consent on a deal to vote on dozens more ahead of final passage.

But an objection from Sen. Bill Hagerty (R-Tenn.) means a slate of bipartisan amendments will not get a vote, including a proposal to make it easier for states to get money from the Clean Water and Drinking Water state revolving funds.

“We’ve been trying to vote on amendments all day but have encountered numerous objections from the other side,” Majority Leader Chuck Schumer (D-N.Y.) said on the floor around midnight last night.

Schumer filed for cloture yesterday evening. It sets up a procedural vote to overcome the filibuster Saturday that will need at least 60 senators in support, followed by a likely vote on final passage sometime over the weekend or early next week. Democrats are also planning to pass a budget resolution next week to set up a $3.5 trillion reconciliation package that’s expected to contain a massive suite of climate policies.

Ultimately, it was the Congressional Budget Office that threw a wrench into the process. The CBO score on the bill released yesterday, which Republican senators had been awaiting ahead of final passage, found the bipartisan bill would add $256 billion to the deficit over the next decade.

Members of the negotiating group argued that the score did not properly account for the bill’s pay-fors, and it appears unlikely to affect the final vote tally for now.

“The new spending under the bill is offset through a combination of new revenue and savings, some of which is reflected in the formal CBO score and some of which is reflected in other savings and additional revenue identified in estimates, as CBO is limited in what it can include in its formal score,” Sens. Rob Portman (R-Ohio) and Kyrsten Sinema (D-Ariz.) said in a joint statement last night.

But Haggerty said the CBO score only proved the bill was not paid for. “Despite this news, I was asked to expedite the process and pass it,” Haggerty said in a statement. “I could not, in good conscience, allow that to happen at this hour — especially when the objective of the majority is to hurry up and pass this bill so that they can move quickly to their $3.5 trillion tax-and-spend spree designed to implement the Green New Deal.”

Haggerty was not, however, the only Republican railing against the bipartisan bill’s price tag. Sen. Ted Cruz (R-Texas) called the bill a “down payment on President Biden’s Green New Deal.”

Cruz also criticized the bill’s revival of Superfund taxes that lapsed in 1995 and pushed an amendment to nix it, though it will not get a vote after Haggerty’s objection.

“This provision will also likely make many of the raw materials used in infrastructure projects more expensive,” Cruz said of the Superfund tax, which the negotiating group expects to bring in $13 billion in revenue.

Cruz had particularly sharp words for the energy and climate provisions of the bill, as well, but they are generally supported by moderate environmental and business groups.

“While much of the attention has rightly been on our crumbling roads, bridges, and water infrastructure, there’s another big winner in the Senate’s bipartisan package — our climate,” Marty Durbin, who heads up the U.S. Chamber of Commerce’s Global Energy Institute, wrote in a blog post yesterday.

The amendment meltdown capped a long day of back-and-forth haggling that lasted more than 12 hours.

At several points throughout the day, senators and aides thought they would be able to get a deal on a slate of amendments and pass the full bill last night. Many senators are leaving town today for the funeral of former Sen. Mike Enzi (R-Wyo.), and votes on the budget resolution are already going to cut into the August recess that is scheduled to begin next week. But those talks ultimately fell through during an unrelated nomination vote that saw senators negotiating on the floor until nearly midnight.

One amendment that was in the mix for a vote yesterday was a proposal from Democratic Sen. Jeff Merkley of Oregon and Republican Sen. Jim Inhofe of Oklahoma that supporters say would have increased the percentage of clean and drinking water funds available as grants rather than loans for communities to invest in critical water infrastructure projects.

The language touched on President Biden’s vow to remove all the nation’s lead service lines that contaminate drinking water. As it stands, the infrastructure bill provides a stream of just $15 billion dedicated to removing lead lines — half of which must be repaid — even though Biden initially called for $45 billion to get the job done.

The Merkley-Inhofe amendment would have ensured grants and loans awarded for removing lead service lines would not have to be repaid, which supporters say is critical in allowing states and local communities to fully access the funds.

A Senate aide confirmed it was one of the amendments being negotiated on last night before the process fell apart. It’s nonetheless an issue that could bubble up in reconciliation, with Democrats pushing to spend even more money on climate change and clean water.

Despite the collapse last night, Schumer and Sinema, a key negotiator on the bill, struck an optimistic tone.

“While we were unable to agree on additional amendments today, I also look forward to us reconvening on Saturday and proceeding under regular order to finish what will be a historic piece of legislation, both in its bipartisan nature and in the impact it will have on our country,” Sinema said on the floor.