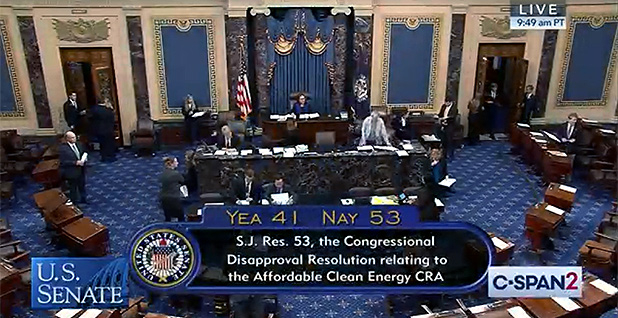 The Senate today voted to retain the Trump administration’s regulation on power plant greenhouse gas emissions after Democrats forced a messaging vote on the replacement for the Obama-era Clean Power Plan.

In a 41-53 vote, the chamber’s Republicans rejected a Congressional Review Act resolution to halt the Affordable Clean Energy (ACE) rule, which repealed the statewide emissions caps of the Clean Power Plan and replaced it with a less stringent regulation focused on upgrades at individual power plants.

In a pair of notable votes, Republican Sen. Susan Collins, a moderate up for reelection in Maine this year, voted "yes," while Energy and Natural Resources Committee ranking member Joe Manchin, the coal-supporting Democrat from West Virginia, voted "no."

Democratic Sens. Kyrsten Sinema of Arizona and and Doug Jones of Alabama also voted against the resolution, as did Republican Sen. Cory Gardner of Colorado, considered by many to be among the most vulnerable senators in 2020.

Democrats had forced the vote under the CRA, an obscure 1996 law that lets Congress have 60 legislative days to review executive branch rulemakings.

Because the law allows a vote on the Senate floor with the support of just 30 senators, it’s one of the few ways Democrats can bypass Majority Leader Mitch McConnell (R-Ky.) and force consideration of their priorities.

And before the vote had even closed, they were already taking credit for making the Senate take a vote on climate change, despite years of silence and science skepticism from Republicans.

"Our Republican colleagues have a choice: They can either stop the rollback of life-saving environmental protections, or they can side with energy companies," Senate Minority Leader Chuck Schumer (D-N.Y.) said on the floor this morning ahead of the vote.

Some environmental groups had actively encouraged lawmakers to vote for the resolution. The League of Conservation Voters has said it will likely use the vote in calculating its legislative scorecard, which rates how lawmakers vote on environmental issues.

And John Bowman, managing director of government affairs at the Natural Resources Defense Council, said this morning that the vote identified "which senators want to curb the dangerous carbon pollution driving the climate crisis, and which senators support the Trump administration’s obsession with climate denial and inaction."

"The Clean Power Plan would have reduced emissions from the power sector 32 percent by 2030," Shannon Heyck-Williams, director of climate and energy policy at the National Wildlife Federation, said in a statement.

"Today’s failure to block the rollback of the Clean Power Plan creates an uncertain future for our economy, public health, and the wildlife that calls our nation home," Heyck-Williams said.

EPA projected that the ACE rule would reduce emissions 35% under 2005 levels by 2030. That’s more than the projected fall from the Clean Power Plan but just barely more than EPA’s projected baseline for power-sector emissions reductions, which has changed in recent years as power companies retire their coal fleets.

Democrats have latched on to that data point to argue that ACE could be worse for the environment than no regulation at all.

But Republicans, by and large, defended the ACE rule as a return to reasonable regulatory policy and dismissed the vote as a partisan messaging exercise. McConnell on the floor this morning called the Clean Power Plan vote "another effort to fire up the time machine."

"The basic facts haven’t changed since this job-killing scheme was first put forward back in 2014," McConnell said.

Environment and Public Works Chairman John Barrasso (R-Wyo.) said Democrats are "looking to make a point with the press."