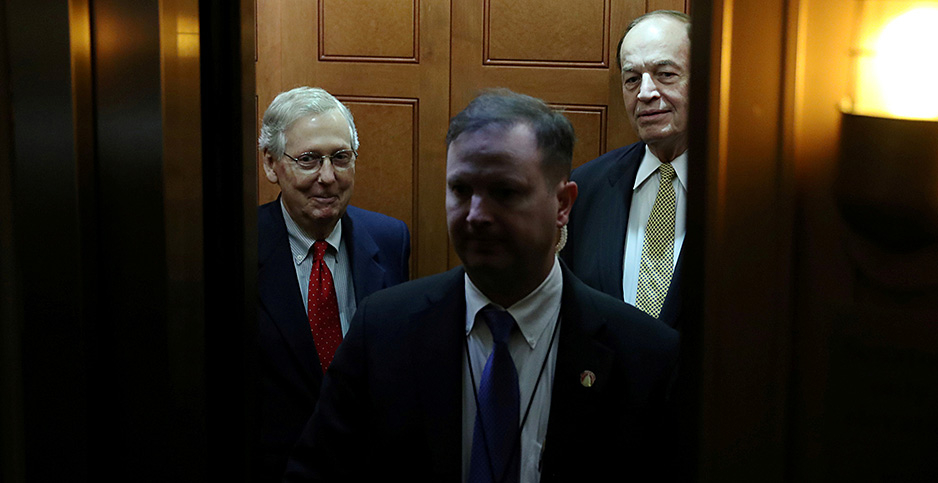 The Senate Appropriations Committee released its 12 annual government funding bills, without holding any markups, to serve as an opening bid in negotiations with the House.

Congress will need to move quickly on a fiscal 2021 deal, with current funding set to expire on Dec. 11, or risk a federal shutdown.

"By and large, these bills are the product of bipartisan cooperation among members of the committee," said Senate Appropriations Chairman Richard Shelby (R-Ala.). He said he was eager to work with House appropriators to resolve differences in a "bipartisan manner" to deliver a broad omnibus package.

Senate Democratic appropriators signaled they mostly supported the bills but said they were frustrated by the lack of markups to offer amendments.

Senate Appropriations Committee ranking member Patrick Leahy (D-Vt.) said markups are "how a democracy is supposed to function, regardless of which party is in the majority. We should not be running away from the tough issues."

House Majority Leader Steny Hoyer (D-Md.) chided the bills as "very late," adding that this year marks the first time in 75 years the Senate has not held a single spending bill markup. He noted the House passed 10 of its 12 spending bills by the end of July.

"I hope we can reach agreement on full appropriations before Dec. 11 and prevent a shutdown in the middle of a presidential transition," Hoyer added.

The House this summer, in a blitz of activity, passed H.R. 7617, including the Energy-Water, Transportation-Housing and Urban Development, Commerce-Justice-Science, Defense, Labor-Health and Human Services-Education, and Financial Services-General Government bills.

The $51.75 billion Energy-Water bill — which covers the Department of Energy, Army Corps of Engineers’ water projects and nuclear weapons funding — saw the largest increase of any domestic spending bill.

The Senate plan would be $3.4 billion over current spending and about $2.1 billion over the numbers approved by the House.

Alexander said the $7 billion proposed for the Office of Science is crucial to his goal of creating a "Manhattan Project" for clean and cheaper energy.

EPA would be funded at $9.09 billion under the Senate plan, which largely matches current top line funding but is $300 million less than the House’s proposed $9.4 billion for fiscal 2021. Senators rejected the White House’s proposed $2.7 billion cut to the agency.

Senate appropriators would provide $2.765 billion to the Clean Water and Drinking Water state revolving funds and an additional $60 million to the Water Infrastructure Finance and Innovation Act program to provide low-interest loans to communities needing to upgrade their systems.

The committee’s report suggests EPA prioritize WIFIA loans for projects that address lead or per- and polyfluoroalkyl substances (PFAS).

The Interior-Environment bill would provide $513 million for EPA’s so-called Geographic Programs, a $3.2 million increase over current levels. Half of that increase is additional funding for the Gulf of Mexico, which would receive more than $19 million total under the bill.

The Senate Appropriations Committee said it was especially concerned with dead zones in the Gulf and wants EPA to work with Gulf states and the Department of Agriculture on the issue.

Lake Champlain would also receive an increase under the bill, which provides $15 million total with an interest in implementing a phosphorus reduction plan for the Vermont waterway.

While previous increases to EPA’s geographic programs focus on the Chesapeake Bay and Great Lakes, the Senate bill would maintain funding for those programs at $85 million and $320 million respectively.

The committee’s report does say it expects some of the Great Lakes Restoration Initiative funding to be used for shoreline mitigation measures, "which provide much needed protection for Great Lakes shorelines threatened by rising lake levels."

The Interior Department would receive $13.6 billion under the Senate proposal, which is a slight increase over the current spending of $13.5 billion but about $300 million less than the House request.

Leahy warned the Interior-EPA bill provided "inadequate funding" for conservation and protections. He said more dollars should be directed toward climate change work and "bedrock" environmental laws such as the Clean Air Act and Clean Water Act at EPA as well as Interior’s Indian Health Service programs needed for pandemic response.

While Senate appropriators largely stuck to their promise of avoiding new controversial riders, they did revive several add-on policy provisions from past bills.

Sen. Tom Udall (D-N.M.), the ranking member of the Interior-Environment spending panel, said he backs the legislation but would try to have some riders removed.

Udall said he’s "troubled that the draft continues a number of anti-environmental policy riders from previous years that would bind the incoming Biden-Harris administration before they are even in office and need to be removed, including language to block protections for the sage grouse."

The Senate also joined the House in attaching a rider that would block funding from a wholesale reorganization of the Army Corps, which could result in the agency moving under the Defense Department’s purview.

Other departments and agencies