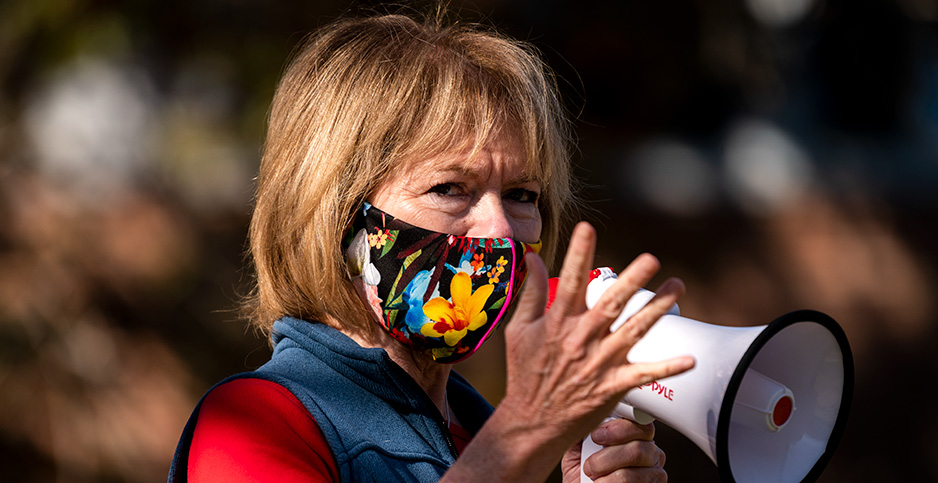 Sen. Tina Smith (D-Minn.) speaks during a get-out-the-vote event on the University of Minnesota campus in November 2020. Smith is a leading advocate for a U.S. clean electricity standard. Stephen Maturen/Getty Images

It was underneath the dangling chandeliers of the reception room in the Minnesota state Capitol that Democratic Sen. Tina Smith had her climate awakening.

It happened in 2015, when she was lieutenant governor. A group of teenagers brought in by Will Steger, the famed polar explorer, pleaded with her to do something about climate change.

They gathered in chairs in a circle. The young people were clearly overwhelmed by the ornate space, where oil paintings of historical scenes in Minnesota hung amid wood paneling and carved ceiling beams.

They had a simple but profound request: You have the power to save our future, please use it.

Something in her shifted.

Now, just six years later, Smith’s quiet climate work on Capitol Hill could reverberate across the country and into the future.

She’s working with Sen. Ben Ray Luján (D-N.M.) to craft legislation for a clean electricity standard, which has been described as the “backbone” of Biden’s climate policy. It mandates that 80% of the electrical grid be decarbonized by 2030. It would unlock federal investments to help states switch to clean energy more rapidly.

Details are still being hammered out, but Smith said the CES bill won’t pass along costs to consumers.

“The key aspect of it as we’ve designed it is that it’s a payment, an incentive to utilities to add clean energy, and to keep the clean energy they have so there’s not a bait and switch,” Smith said.

The path of her CES bill remains to be seen. It might fail. Or it could become a key part of the Democrats’ budget reconciliation bill that the Biden administration views as its best option to pass sweeping climate policy.

But first her bill has to survive a long, hot summer of tense negotiations.

Whatever Biden comes up with on climate in Congress will be one of the most powerful tools he has to push world leaders to increase their own ambitions at international climate talks in Scotland later this year.

‘Always in the fight’

Steger couldn’t have imagined the stakes were so high when he brought the students to the Minnesota Capitol in St. Paul six years ago.

Steger remembers that day well, because he gained a powerful advocate in a lifelong climate quest. He is the fourth person in history to visit both poles, and trekked more than 3,000 miles across Antarctica.

He has seen the effects of the warming planet more intimately than most humans and has worked to alert politicians about the problem for four decades. He said Smith’s embrace of the issue is one of the quickest “transformations” that he can remember. He said Smith has been working behind the scenes on climate since then.

“She’s quiet, and she doesn’t draw attention to herself or her accomplishments, that’s one of her powers,” Steger said. “She doesn’t make a lot of noise, but she will stand up if need be.”

Since then, Smith has been working on the technical aspects of climate policy. She’s focused on legislation that can win over moderates. In April, she introduced a bipartisan climate bill with Sen. Todd Young (R-Ind.) to help farmers improve soil health and drive down carbon emissions with cover crops. Other bipartisan efforts have included bills to encourage utilities to use carbon capture and storage, and to improve energy storage technologies.

As a former lieutenant governor in a swing state, Smith has experience with diverse coalitions. She has met with farmers who are concerned about pests moving northward and destroying their crops. In the northern part of the state, where long winters were once a given, outdoor enthusiasts have told her how fishing shacks fall through the ice, and how snowmobile seasons end early because of record temperatures.

Some people in Minnesota want wind turbines to cover abandoned farm fields. Others want nothing to do with them. Smith has talked to them all.

That type of work doesn’t always earn headlines, and Smith is accustomed to being overshadowed by more visible, and oftentimes male, climate hawks in Congress. But her work on decarbonizing the electrical grid is some of the most important climate policy being worked on in Congress, said Leah Stokes, a political scientist at the University of California, Santa Barbara.

“She was always in the fight, she was always being pretty pragmatic and dedicated to trying to solve the problem of how do we get pollution out of the electricity system,” Stokes said. “She’s maybe not as well known as other climate hawks, but she’s right at the top of the list when it comes to being a climate champion in Congress.”

The $1.2 trillion bipartisan infrastructure agreement brokered by congressional moderates and the White House last month is a far cry from Biden’s climate pledges on the campaign trail. Progressives and climate hawks in Congress are increasingly frustrated with the White House. Advocacy groups that worked with the Biden administration are now protesting in front of the White House.

Smith’s job now is to convince moderates to support a clean electricity standard while also demonstrating to progressives that it goes far enough. She’s going to lean into the jobs message to win over centrist Republicans, to show how clean energy can create economic opportunity.

“This is a huge opportunity for a lot of red congressional districts if people could just see it,” Smith said.

Smith has a unique resume that may qualify her for the job.

Long before she became a politician, she was a focus group moderator, logging hours behind a one-way window, watching thousands of people with widely varying perspectives answer questions. It taught her something important about persuading people to think differently, she said.

“If you come into a room and you try to explain to someone why the view that they have is wrong and your view is right, you’re going to get absolutely nowhere,” Smith said. “But if you try to understand what they care about, and then figure out a way to take that and build on it toward something that’s productive, you can get so much further.”