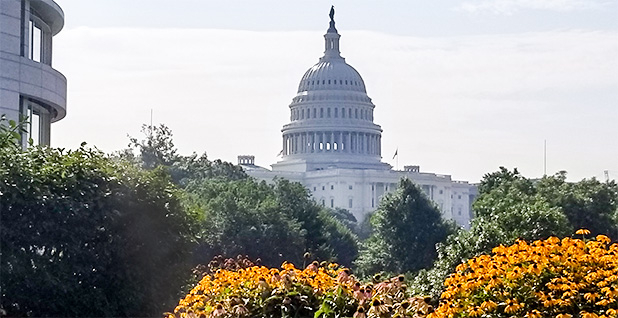 The Senate will try this week to finish work on a spending package that’s been held up in part by sparring over a popular conservation program.

Senate Majority Leader Mitch McConnell (R-Ky.) filed to end debate on the minibus spending legislation last week after senators pressed for adding several policy riders, among them an extension of the Land and Water Conservation Fund.

McConnell and top appropriators from both parties have opposed adding any new policy provisions, warning that similar efforts in the past have stalled Senate funding measures.

It’s not yet exactly clear when this week the Senate could vote on final passage of the package that contains the fiscal 2019 Interior-EPA, Agriculture, Transportation-Housing and Urban Development, and Financial Services spending bills.

Senate Appropriations Chairman Richard Shelby (R-Ala.) said he expects policy provisions will be set aside and the minibus will win bipartisan backing this week. He also said appropriators are working on a minibus manager’s amendment that would contain add-ons unlikely to draw pushback from either party.

Several senators have said they are now looking at other options for moving the LWCF reauthorization before its current one expires at the end of September.

After the minibus, Shelby said, the Senate’s next spending action could be a package that marries the annual Defense and Labor, Health, Human Services and Education spending bills, which account for about three-quarters of all annual discretionary dollars.

Conceding that tying defense funding to domestic programs could draw some pushback, Shelby said it was too early to say if the "marriage works."

The House, meanwhile, is on summer recess and won’t return until Sept. 4, although appropriators expect negotiations will continue at the staff level on fiscal 2019 spending bills.

Rep. Mike Simpson (R-Idaho), chairman of the House Energy and Water Development Appropriations Subcommittee, said he expects most of the differences between the House and Senate versions of his panel’s bill will be resolved by September. He said the largest outstanding question is the bill’s overall funding level, which is linked to a larger debate over increased veterans spending, and that will be settled by leadership.

Speaker Paul Ryan (R-Wis.) acknowledged for the first time last week that Congress will need to pass stopgap spending legislation in September because lawmakers won’t finish work on all 12 appropriations measures before the new fiscal year begins on Oct. 1.

Ryan made the comments and ruled out a government shutdown after a meeting last week with President Trump, who in the past has said he might force agencies to close if Congress does not provide full funding for building a border wall.

He said Trump is willing to be "patient," signaling that the hot-button wall funding fight might not be resolved until after the election.

In the meantime, Ryan said, "we feel very good that we are on the same page and in sync with the administration and the president on getting as much appropriation [work] done as possible, including funding our military on time."

Trump, however, seemed to cast some doubt yesterday that everything was a done deal. In a tweet storm after morning shows, Trump wrote a government shutdown was not out of the question.

"I would be willing to ‘shut down’ government if the Democrats do not give us the votes for Border Security, which includes the Wall," Trump tweeted.

Also on tap this week in the Senate is a final vote on the fiscal 2019 defense authorization bill, which easily passed the House on Thursday (Greenwire, July 26).

The bill is often a magnet for contentious natural resource and wildlife policy riders, but as in past years, those provisions largely fell by the wayside in conference talks.

However, the final bill includes a provision opposed by Democrats and environmentalists that would extend the review period for "incidental takes" for marine mammals from sonar and underwater explosives from five to seven years.

Senate passage is all but assured, but McConnell filed cloture on the measure anyway before the Senate left town Thursday, in a bid to keep critics from slowing down final passage of what is traditionally a bipartisan priority.

McConnell also moved to end debate on an extension of the National Flood Insurance Program (NFIP), which is scheduled to expire at the end of July but would be extended through Nov. 30 under a bill that passed the House last week (E&E News PM, July 25).

Conservative groups have opposed extending the NFIP absent significant reforms, but bipartisan agreement to overhaul the financially beleaguered program continues to be elusive. The current extension would be the seventh short-term extension in 10 months.

While it, too, wants to see major changes to the program, the White House last week cited the "catastrophic losses" of the 2017 hurricane season in calling for a short-term extension.