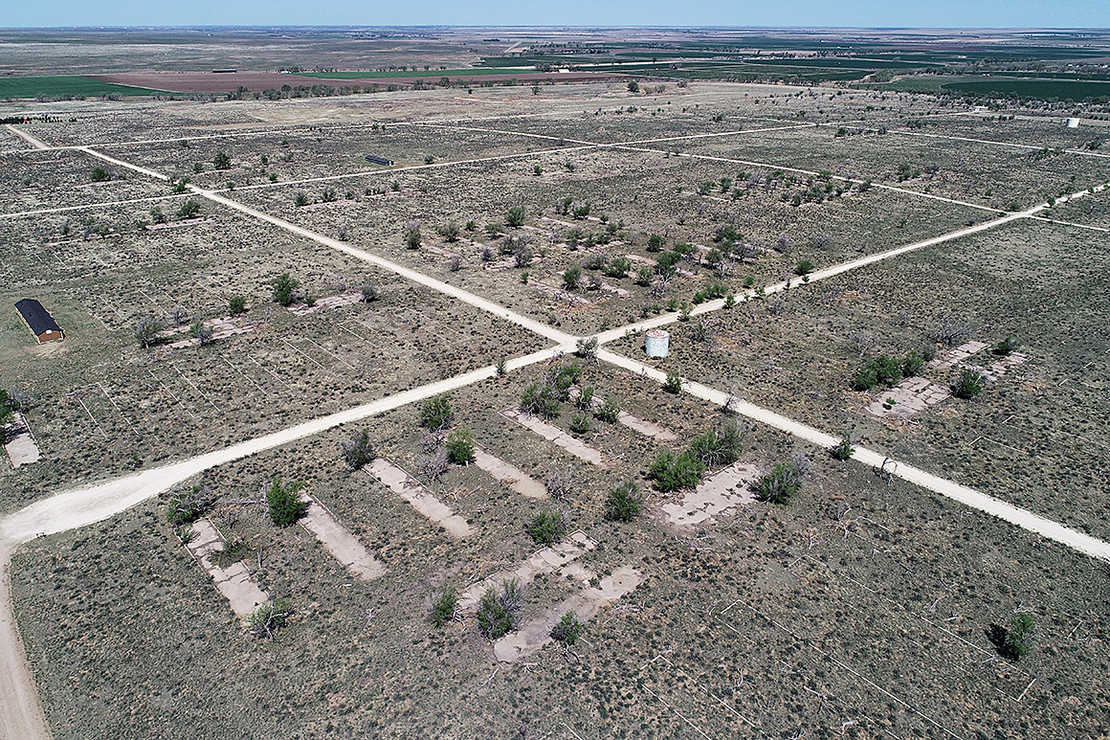 This photo shows the foundation of barracks at Camp Amache, a former internment camp for Japanese Americans in Granada, Colo. The camp site covered 10,000 acres and housed 7,300 people who were forced to relocate there during World War II. Hyoung Chang/The Denver Post/AP Photo

Backers of a bill to designate a former Japanese American internment camp in Colorado as a national historic site say they face only one remaining obstacle: Utah Republican Sen. Mike Lee.

Lee, a second-term senator, is under growing pressure to reverse course after he blocked a request to allow the legislation to pass by unanimous consent last week.

Anna Peterson, the executive director of Mountain Pact, a group that represents many Western local officials on climate and public land issues, yesterday called Lee’s decision to put a hold on the bill “unacceptably offensive and downright wrong.”

And Janessa Goldbeck, chief executive officer of Vet Voice Foundation, said it was “deeply disappointing that … Lee cares so little about our nation’s history.”

Supporters want the plan approved by Feb. 19 to mark the 80th anniversary of the signing of an executive order by President Franklin Roosevelt that created Camp Amache in 1942 during World War II.

The site is one of 10 that held more than 120,000 Japanese Americans who were removed from the West Coast by the War Relocation Authority under Roosevelt’s order.

Lee’s office did not respond to requests for comment.

A Senate version of the bill is expected to win overwhelming support too. But passing the bill by unanimous consent would have allowed quick passage and avoided a possible filibuster and a lengthy floor debate.

“We have 99 senators on one side who support this and one objecting — I have absolutely no idea why,” said Sen. Michael Bennet (D-Colo.), who’s sponsoring the Senate bill along with Sen. John Hickenlooper, another Colorado Democrat.

In a speech on the Senate floor on Friday, Bennet said the camp is important to his home state “and it matters to America.”

“This is about whether we’re going to ignore the worst parts of our history or lift them up and give future generations the opportunity to learn from them, so that we can move this country closer to our highest ideals,” he said.

In his speech, Bennet expressed hope that Lee’s opposition was “just a misunderstanding of some kind.”

“We fight for a lot of things on this floor, but there’s a bipartisan tradition going back to Teddy Roosevelt of both parties coming together to protect places that matter to our heritage as a nation,” he said.

The issue came to a head when Lee asked Texas Republican Sen. John Cornyn to object to Bennet’s request to pass the bill by unanimous consent.

“Due to the winter storms that are shutting down airports around the country, Sen. Lee … is not here, and I had the bad luck to be here when he communicated to me his desire that I make an objection on his behalf,” Cornyn told Bennet.

Describing himself as “a noncombatant on this issue,” Cornyn said Lee wants to offer an amendment to the bill, but he did not provide any specifics on how Lee wanted to change the legislation.

“He wants to be here to participate in the discussion and vote on the bill,” Cornyn said. “So on his behalf, I object.”

Bennet expressed skepticism that weather had kept Lee from objecting on his own.

“Colorado and Utah are right next to each other, and I face the same travel issues that the senator from Utah faces,” Bennet told Cornyn. “I guess I hope he gets to where he’s trying to go.”

The bill would make the site in southeast Colorado part of the National Park Service and allow federal money to be used to preserve it.

“Adding Amache to the National Park System would ensure that its legacy is preserved so future generations can learn from our mistakes, and the landmark can honor the lives of those who were imprisoned and forced to suffer there,” Goldbeck said.

Last month, more than 60 Japanese Americans who survived the camp wrote a letter to Senate leaders urging them to schedule a vote before next week’s anniversary (E&E Daily, Jan. 12).

“With each year that passes, there are fewer of us. We are counting on you to see this through,” the survivors, including more than a dozen who are in their 90s, said in their letter to Senate Majority Leader Chuck Schumer (D-N.Y.) and Minority Leader Mitch McConnell (R-Ky.).

The survivors said that adding Amache to the park system “would allow us to protect a physical, and sacred, reminder that incarceration affected a diaspora of Japanese American communities across the country.”

“Our nation still has a long way to go to learn from this mistake, and our community — both old and young — continues to suffer from anti-Asian hate crimes,” they wrote. “Our national parks and the stories they honor reflect our values as a nation.”