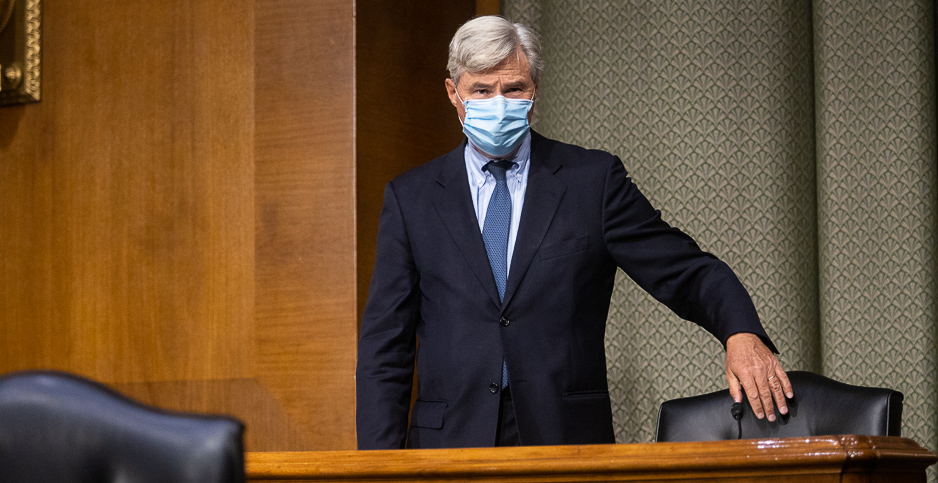 U.S. Sen. Sheldon Whitehouse wants Congress and the Biden administration to conduct an investigation into what he calls the "climate corruption" of the Trump administration.

The Rhode Island Democrat is advocating for a broad inquiry into connections between the Trump administration and the fossil fuel industry. In an interview with E&E News, Whitehouse said the connections go beyond the typical revolving door of Washington — where government officials use their experience to land lucrative work in the private sector — and into possible quid pro quo.

"I am confident that a good, hard look at communications between fossil fuel interests and people who had duties to discharge in government will reveal that they failed in their duties because of pressure and inducements from the fossil fuel industry," he said.

He wants to set up a special committee of Congress, with its own staff and investigative powers, to gather information he suspects Biden Cabinet officials will find when they take office. He said he also would like to hold hearings in Congress but wants subpoena power to conduct a full investigation. However, since the Senate is split 50-50, he would need at least one Republican lawmaker to sign on to a subpoena.

Whitehouse also said he wants the Department of Justice to establish a bipartisan advisory committee to review the Trump administration’s politicization of DOJ. He said the outside committee could be staffed by veterans of the department and linked to DOJ’s inspector general and Office of Professional Responsibility.

Another avenue would be for the Biden administration to establish a presidential commission, composed of independent experts, to explore climate denial, the dark money that funds it and how that affected the actions of government officials.

Whitehouse said he thinks the last four years go beyond Washington norms, and he doesn’t want any violations of the law to be forgotten. He wants the Biden administration to learn from the Obama administration’s mistakes, which he said included a willingness to overlook improper industry connections at federal agencies.

"The reason I wanted to speak so plainly was to make the point to the Biden administration that they need to be on the alert for this, that the old Obama ‘we’re not going to look back, we’re just going to look forward’ paradigm is simply not appropriate in this era and after the last administration’s behavior," he said.

A Biden White House spokesman did not return a request for comment.

Part of what’s driving Whitehouse is that he suspects criminal activity.

"When you look at the extent to which the subjugation of policy was complete and when you look at the generally low-integrity mischievous characters that were installed, I think it’s almost impossible to conceive of a scenario in which no criminal laws were broken," he said.

A number of Trump officials returned quickly to the energy industry after leaving government.

That includes former EPA Administrator Scott Pruitt, who departed under the cloud of an ethics scandal and then became a coal industry consultant. Less than a month after Vincent DeVito left his job as counselor to the secretary for energy policy at Trump’s Interior Department, he took a job as the executive vice president and general counsel for Cox Oil Offshore LLC. Joe Balash, Interior’s assistant secretary for land and minerals management, abruptly left the administration to take a senior job at a foreign oil company pursuing drilling in Alaska.

There is no public indication that any Trump officials committed illegal acts related to climate or the fossil fuel industry.

Some experts cast doubt on Whitehouse’s pursuit of fossil fuel connections and said his accusations are tinted by politics.

The fact that somebody who used to work for an industry believes that certain types of regulations are too costly to be justified is not corruption, said Jonathan Adler, a professor at the Case Western Reserve University School of Law.

He said Whitehouse is quick to assume nefarious motives when it’s more likely he doesn’t like that the Trump administration was effective at undoing Obama-era regulations and adopting policies that would make it harder to develop future regulations. He said Whitehouse shouldn’t demonize his opponents unless he "really has the goods."

"I’m just skeptical," Adler said. "He often characterizes what I would view as the normal networking in Washington as being corrupt when it’s done by people he doesn’t like."

He said since bribery requires quid pro quo, proving that any actions were illegal would essentially require proof that government officials acted to roll back climate regulations because of explicit promises of future monetary benefits.

Whitehouse said he understands that the legal cases would be tough to prove, but he is certain that career government officials at federal agencies know more than they have been willing to report because they were fearful of retaliation. He said he wants to raise awareness of possible corruption to encourage whistleblowers in federal agencies to come forward, in case they have any information on improper acts by political employees.

Corruption cases likely would hinge on a quid pro quo, which Whitehouse said could have come in the form of a "promise that they would be taken care of in the future."

"When you’re as big and complicated and sophisticated as the fossil fuel sector," he said, "you don’t show up like some mope with a bag full of cash looking for a favor."