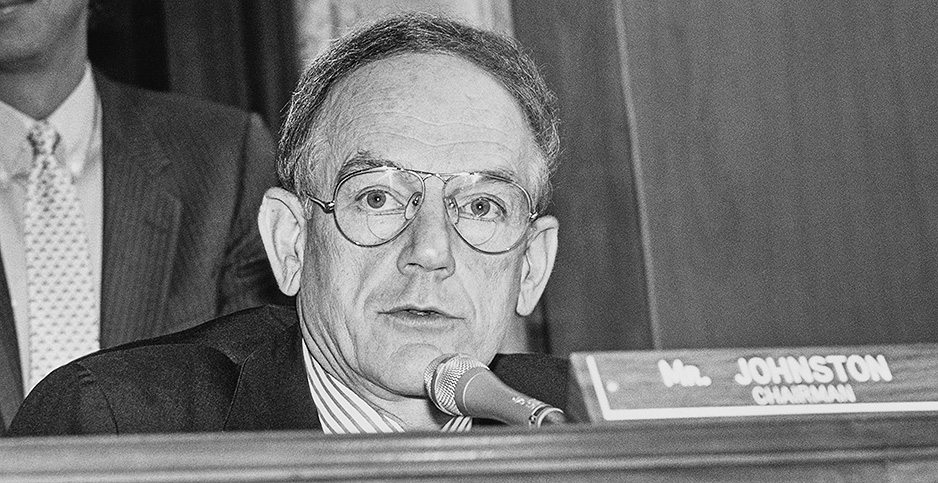 As ranking member and then chairman of the Senate Energy and Natural Resources Committee from 1981 to 1994, the Louisiana lawmaker oversaw the passage of most of the United States’ major energy legislation for decades.

A moderate Democrat who hailed from a state rich in oil and gas, Johnston worked with his Republican colleagues to pass a laundry list of bills, including the Energy Policy Act of 1992.

He also made waves by holding the first-ever congressional hearing on climate change.

The famed 1988 hearing featured testimony from NASA scientist James Hansen, who offered lawmakers an early warning about the risks posed by global warming.

"Climate change was not the issue du jour at that time, and we were really giving it visibility and introducing it to a lot of people for the first time," Johnston recalled in a recent interview.

Now 86 years old and with 10 grandchildren, the Louisianan shows no signs of slowing down.

He currently works at his own law and lobbying shop, Johnston & Associates, which has formed a strategic alliance with the firm Steptoe & Johnson. His clients include the mining company Freeport-McMoRan Copper & Gold as well as the utility Southern California Edison.

Johnston recently sat down with E&E News to discuss helming a powerful committee, running for reelection against a member of the Ku Klux Klan and urging bipartisanship in an era of "tribal" warfare.

What was it like serving as chairman of the Energy and Natural Resources Committee from 1986 to 1994?

It was a very good experience. I had a very good relationship with the Republicans. And we actually had a working majority of Democrats and Republicans on virtually every issue, which meant that we had success in passing matters through the committee.

During the years I was chairman, we really rewrote the energy policy of the United States. We dealt with oil, gas, renewables, energy efficiency, energy conservation — did I leave anything out? Nuclear.

Were you the first ENR chairman to emphasize the threat posed by climate change?

Well, I held the first hearing on climate change back in the ’80s. It was the first such hearing on either side of the Capitol. And I said at that time, it was a very serious problem that we expected to get worse and that was caused by human activity in large measure. And of course, since then, I have only reinforced that opinion.

NASA scientist Jim Hansen famously testified at the hearing that the age of global warming had arrived. Did he face opposition?

No, I don’t recall people trying to minimize the risk. Climate change was not the issue du jour at that time, and we were really giving it visibility and introducing it to a lot of people for the first time. So there were not naysayers at that time. There were not deniers.

Your closest reelection race was in 1990 against David Duke, a former Ku Klux Klansman. What was that like?

Oh, it was not a pleasant experience. I thought that all the "good people" would come together against David Duke. But I found that there were strong feelings of racism and resentment against affirmative action and that sort of thing.

People think Duke was a yahoo from the country, but he was actually a very skilled politician who knew how to stir up resentments. Very, very skilled but very, very irresponsible. But all’s well that ends well, and I ended up winning by 11 percentage points.

Former Sen. Frank Murkowski (R-Alaska) succeeded you as ENR chairman. What was your relationship with him like?

Have you reached out to Sen. Lisa Murkowski (R-Alaska), the daughter of Sen. Frank Murkowski and the current ENR chairman?

Yes. I think she has done an excellent job as chairman. I think she is about as bipartisan as you can get in chairmen these days. She supports helping on climate change, but she also believes in energy independence for the United States, which I think is just as valid and strong an issue as ever.

Why did you decide to start your own law and lobbying firm after leaving Congress? Who are your clients?

Well, I thought that was a good use of my skills and experience. Right now, I only have Freeport-McMoRan Copper & Gold, which is a mining company, and Southern California Edison, which is of course a utility out in California that is one of the leaders in renewable energy.

How do you square your representation of a mining company with your commitment to climate change?

They’re environmental leaders in the mining industry. And really, you know, mining copper and gold has very little to do with climate change.

What do you make of the relationship between Congress and President Trump? Have you ever seen it so fractious?

I think it’s very unfortunate. You know, things have gotten to be so tribal. In my day, we worked together, and I really believe it is possible for the energy industry and corporate America to work together with the environmental movement. But there’s been so much demonization on either side.

Do you have an example of that?

I’ll give you an example. One of the greatest mistakes is the environmentalists who say we ought to "leave it in the ground" when speaking of oil and gas. When we started the fracking movement, we were producing about 5 million barrels a day; today it is 12 million barrels a day. There are over 10 million jobs associated with that. The environmentalists who want to leave it in the ground have various ways of throwing sand in the gears of the oil companies, such as not allowing fracking. But if we stop producing in the United States, we’d simply import it from OPEC countries. So that is a great mistake, in my judgment.

What do you make of Trump’s rollbacks of environmental regulations?

I think it is a great mistake, particularly to recede from the Paris accord. The United States produces 15% of the [carbon dioxide] in the world, so there’s no way that we can solve the issue of climate change acting alone. We’ve got to be a world leader, and it’s unfortunate that Trump has abandoned that role.

Coming from Louisiana, do you believe that natural gas has a role to play in the nation’s future energy mix?

Natural gas is playing an essential role between now and a carbon-free future, if that is ever totally possible. I doubt if that is totally possible because there are some uses of fossil fuels that batteries can’t replace, like aircraft.

Most of the progress that the United States has made in recent years in reducing CO2 has been from converting coal-fired plants to natural gas. And you certainly need natural gas to back up renewables, which are intermittent. So you very much need that, and by the way, we also need to continue to pursue carbon capture.

What about the future role of nuclear power?

We very much need to keep our present nuclear plants running. Nuclear provides three times the amount of electricity that renewables do in the United States today, so you need to keep them running because you cannot replace that overnight.

You know, they tried to do it in Germany. They did away with their nuclear plants and they had a big renewables push, but then they found that they were running out of electricity and they had to substitute brown coal, and they haven’t been able to meet their carbon reduction goals. So it would be very foolish to shut down our nuclear plants, because that would only increase the amount of CO2 generated in the United States.

What are your thoughts on the Green New Deal?

Well, the Green New Deal has been described as being aspirational, which is another word for impractical. You know, they want to do away with fossil fuels, but they’re conflating fossil fuel production with fossil fuel consumption. The world is going to continue to require a lot of gasoline and natural gas for years to come, and it’s in our interest to produce that and sell it abroad rather than import it from OPEC.

By doing heroic things, you can’t solve the issue of climate change, but you can sink the economy [laughs], so that’s why I say we need really a bipartisan, more cooperative, less tribal approach to climate change.

Have you been following the Democratic presidential candidates and their climate proposals?

I have, but I don’t want to comment on any one particularly. But as I say, they need to seek a bipartisan approach, because that’s the only thing, in my view, that’s really going to work.