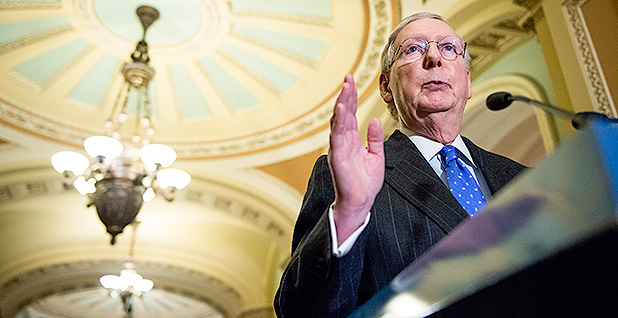 Senate Majority Leader Mitch McConnell (R-Ky.) yesterday presided over one of the most significant changes in Senate rules in decades. Photo By Bill Clark/CQ Roll Call, courtesy of AP Images.

With the epic fight to fill the late Justice Antonin Scalia’s Supreme Court seat all but over, senators from both parties yesterday expressed fears that the already dwindling reserve of bipartisanship in the upper chamber may be hitting an all-time low.

The Senate will vote later today to confirm federal appeals court Judge Neil Gorsuch to the high court, a move only made possible by the GOP majority’s maneuver yesterday to scrap the filibuster for Supreme Court nominees (Greenwire, April 6).

Both sides continued to assign blame the other for the "nuclear option," which allows a simple majority of senators to overrule existing Senate precedents and rules.

"Republicans made it pretty clear that their political agenda is primary and the traditions of the Senate are secondary," Sen. Chris Murphy (D-Conn.) told reporters yesterday. "I don’t think we go back to business as usual."

Murphy conceded, however, that the decision by former Senate Minority Leader Harry Reid (D-Nev.) to go nuclear in 2013 to eliminate the filibuster for all executive branch and judicial nominees except to the Supreme Court was a contributing factor to yesterday’s developments.

Sen. Bill Cassidy (R-La.), who pointed to his collaboration with Murphy on mental health legislation signed into law last year as proof of his own bipartisan efforts, said he feared that such collaborations would become harder in the post-nuclear Senate landscape.

While saying the vote to go nuclear felt "icky," Cassidy laid blame for the maneuver squarely on Democrats, who he said were beholden to "left-wing politics."

Sen. Richard Blumenthal (D-Conn.) took to the floor to criticize GOP senators, who he said were giving each other high-fives after the chamber voted by simple majority to begin closing debate on Gorsuch.

"It saddens me," he said on the floor. "No one should sleep well tonight."

‘Not a day for high-fiving’

Still, there were signs of bipartisan self-reflection after the vote.

"We’ve been through hard times before, and there is something in the Senate that eventually drives people together because we basically want to get things done. That’s true on both sides. It’s not an urge, it’s the reason why we are in this, and over time it all works out," said Sen. Dianne Feinstein of California, the top Democrat on the Judiciary Committee.

Over the past week, some lawmakers tried to head off yesterday’s events by assembling a bipartisan "gang," which in 2005 forced a retreat from similar nuclear brinkmanship.

"I am worried that our attempts to negotiate a compromise failed because there’s such a profound lack of distrust and that’s what many of us are committed to trying to rebuild," said Sen. Susan Collins (R-Maine).

Sen. Ben Cardin (D-Md.) said talks collapsed because there was no support by the Republican leadership.

"Every time we’ve been able to reach agreements in the past, the leadership has encouraged those discussions," he told reporters. "I didn’t see that in this case."

Asked about Senate Minority Leader Chuck Schumer’s (D-N.Y.) role in the move to defuse tensions, Cardin said, "I don’t think it ever got to that point. If the majority is not interested, there’s not much the minority could do."

However, Collins is currently seeking signatures from senators from both parties for a letter to Senate leaders highlighting support for maintaining the filibuster for legislation.

"We need to make very clear to the leaders on both sides that there is no support for curtailing our existing ability to filibuster legislation," she said.

Signing the letter were Cassidy and Senate Energy and Natural Resources Chairwoman Lisa Murkowski (R-Alaska), who said she felt "disheartened and discouraged" by her vote to kill the filibuster for Supreme Court nominees.

"Just feels like it’s a gray day here," she told E&E News. "This is not a day for high-fiving."

She pledged to redouble efforts to work across the aisle.

"We have to be an institution that functions with one another," Murkowski said. "I do not want the Senate to be the House. And so it just puts it upon me and those who also work really hard to be bipartisan to be even more bipartisan."

Sen. Ron Wyden of Oregon, the top Democrat on the Finance Committee who regularly speaks of the importance of bipartisanship, said yesterday there were "two paths out of this."

Citing Senate Majority Leader Mitch McConnell’s (R-Ky.) decision not to even allow a hearing on President Obama’s Supreme Court nominee, U.S. Court of Appeals for the District of Columbia Circuit Judge Merrick Garland, Wyden said President Trump should consult with senators from both parties to "come up with a mainstream choice" for the next vacancy.

The second solution is to find legislation "that is big and important that would also convey a sense that thing were moving in a more constructive way," said Wyden, suggesting that Trump’s infrastructure push fit the bill.

Despite the partisan mud-slinging surrounding Gorsuch’s nomination yesterday, there were signs of a desire for more cooperation.

Intentional or not, there was a flurry of press releases announcing the introduction of bipartisan Senate bills. On the floor, both Wyden and Sen. Sheldon Whitehouse (D-R.I.) warmly welcomed Sen. Johnny Isakson (R-Ga.) back. He was recovering from surgery.

And when Sen. Orrin Hatch (R-Utah) entered a subway car in which Wyden was speaking with E&E News, the Finance Committee chairman interrupted to chide his colleague.

"You’re listening to him? What’s the world coming to?" Hatch said, laughing.

Wyden in turn noted that the pair had just met that morning to discuss legislation they plan to jointly introduce.

"I said we believe in comity, C-O-M-I-T-Y," Wyden countered.