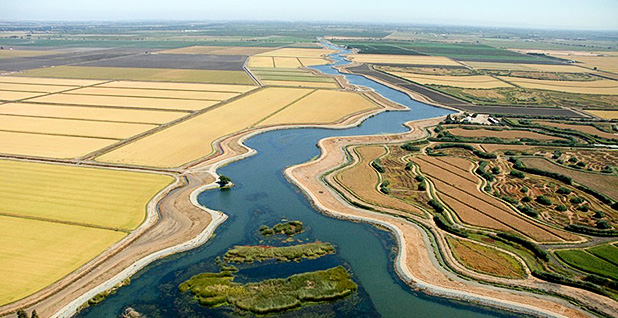 California’s two Democratic senators have committed themselves to opposing a controversial House provision that would block judicial review of the state’s WaterFix tunnel project, reprising a familiar Capitol Hill plot.

These California water narratives start bubbling up in the House, and then they often, although not always, dry out in the Senate.

So it appears to be with the WaterFix. While backstage discussions have occurred, opponents of the $17 billion tunnel project recognize the judicial review ban is all but certain to pass the House as part of a fiscal 2019 Interior and EPA appropriations bill (Greenwire, May 15).

For tactical reasons, the House opponents may not even try to offer an amendment to eliminate the bill’s judicial review language. The House Republican leadership could simply block an amendment at the House Rules Committee; if allowed on the floor, it would inevitably fail in a public vote that would only strengthen the House’s hand in future negotiations.

But then, once through the House, the $35 billion bill and its WaterFix rider will hit a wall.

"The only strategy that appears viable at this time is the U.S. Senate," Rep. John Garamendi (D-Calif.) said in an interview yesterday. "At the moment, we’ll take care of it in the Senate."

Separately, Sens. Dianne Feinstein and Kamala Harris have made clear they will fight the judicial review ban.

"Senator Harris is opposed to any efforts to subvert California’s rights and waive federal environmental laws through the elimination of judicial review," spokesman Tyrone Gayle said in a statement. He added that "if this legislation advanced to the Senate, Senator Harris would want that provision stripped before its consideration."

Feinstein voiced her own "strong opposition" to the ban on judicial review in a May 21 letter to the leaders of the Senate Appropriations Committee, of which she is a senior member.

"A project as divisive and complex as the $17 billion WaterFix should only proceed subject to the full scrutiny of our state and federal laws and our established institutions, including review by independent judges," Feinstein wrote.

Although the Senate, like the House, is ruled by Republicans, it would take some intense motivation to overcome the unified opposition of both of a state’s senators on what amounts to a parochial issue. The Senate’s version of the funding bill, approved by a subcommittee Tuesday, does not include the WaterFix language (Greenwire, June 12).

"We have assembled a package that both sides can support," said Sen. Lisa Murkowski, the Alaska Republican who chairs the Interior, Environment and Related Agencies Appropriations Subcommittee, noting that "unlike previous years, the bill does not include new policy provisions."

The WaterFix plan envisions constructing two 40-foot-wide tunnels to carry water from the Sacramento River 35 miles under the Sacramento-San Joaquin Delta, the complex and ecologically sensitive hub through which water moves from north to south.

California Gov. Jerry Brown (D) and other WaterFix supporters say it will both secure the state’s future water deliveries and protect the sensitive delta.

"We’ve spent years, and thousands and thousands of documents, and environmental reviews and studies," Rep. Ken Calvert (R-Calif.) said in an interview last month. "It’s time to move this project forward" (Greenwire, May 21).

Calvert chairs the House subcommittee responsible for the Interior and EPA appropriations bill, and he inserted the rider that blocks judicial review of WaterFix’s environmental impact statement as well as "any resulting agency decision, record of decision, or similar determination."

Similar San Joaquin River provisions have passed the House before. Every time, they have quietly fizzled out in the face of opposition from Feinstein, who authored the 2009 legislation setting up the river restoration program.