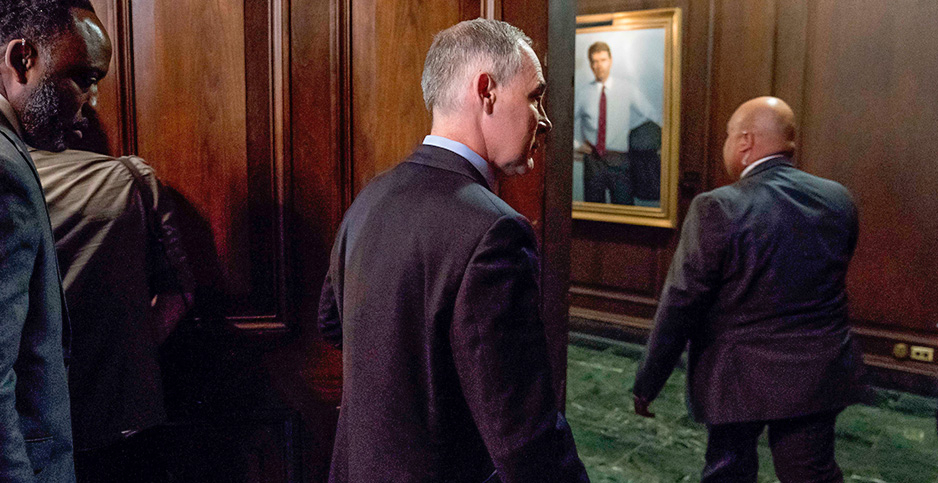 Senate Democrats called today for hearings to examine U.S. EPA Administrator Scott Pruitt’s expansive security detail, questioning whether the price of his around-the-clock protection is justified by threats against him.

Sens. Tom Carper (D-Del.) and Sheldon Whitehouse (D-R.I.) sent a letter today to Senate Environment and Public Works Chairman John Barrasso (R-Wyo.) outlining their concerns about protection for Pruitt, listing measures that include 24/7 protection by a 20-member security team, first-class air travel, and a security sweep and biometric locks for the administrator’s office.

EPA’s internal threat assessments and other documents provided to the senators undermine the agency’s rationale for the increased security, which the Associated Press reported has cost nearly $3 million in pay and travel expenses for Pruitt’s personal detail.

"Documents provided to us by EPA official(s) suggest the agency has relied on questionable ‘threats’ to the Administrator, including reports of non-violent protests, negative feedback about the Administrator’s actions, or other First Amendment protected activity, to justify millions of dollars in additional security spending, including first-class air travel, as compared to his predecessors at the agency," said Carper, the environment panel’s ranking member, and Whitehouse, another committee member, in the letter.

"These non-public documents include security threat assessments from the United States Secret Service that identify no ‘reports of behaviors of interest’ against Administrator Pruitt, and an internal EPA Intelligence Office report that disputes the Administrator’s claims that the nature of the threats against him justify his expenditures."

In a statement, Barrasso took issue with the Democrats’ letter, saying it released sensitive information. The chairman said he would not hold hearings on Pruitt’s security measures.

"I am deeply troubled that members of the committee would publicly release law enforcement sensitive information regarding the safety and security of a cabinet member and his family," said Barrasso.

"This letter selectively quotes non-public documents. Any reasonable reading of these documents supports the Office of the Inspector General’s statements that Administrator Pruitt faces a ‘variety of direct death threats.’"

He added, "This is exactly why members should not publicly disclose information that relates to the safety of a cabinet member. It is also why this committee will not hold a hearing on this issue."

"Americans should all agree that members of the president’s Cabinet should be kept safe from these violent threats," Wilcox said.

One record obtained by the senators says there’s no credible threat against Pruitt and conclusions drawn by the administrator’s security detail as well as the IG aren’t in line with the actual threat against the EPA chief.

The February 2018 memo states that "[u]sing all source intelligence resources, EPA Intelligence has not identified any specific credible direct threat to the EPA Administrator." In addition, the senators say the memo describes several efforts by EPA Intelligence officials to tell agency leadership and the IG that "the ‘threat’ to the Administrator was being inappropriately mischaracterized by the Protective Service Detail (PSD) and the OIG."

The inspector general has seen its investigations of threats against EPA spike since Pruitt took office. Further, the watchdog office said the administrator has faced more threats than his predecessors at EPA. The watchdog’s investigative reports obtained by E&E News under the Freedom of Information Act show IG agents have looked into several threats against Pruitt, including threatening tweets and postcards (Greenwire, Jan. 11).

Still, some of those reported threats haven’t seemed serious. As reported by E&E News this past January, protesters who disrupted one of the EPA chief’s speeches last year sparked an IG investigation after initially being considered a threat (Greenwire, Jan. 23).

Carper and Whitehouse also cited records questioning whether Pruitt needed to fly first class for security purposes. EPA intelligence has "not seen any analysis to indicate why the Administrator would be at any greater risk on a commercial airline than any other passenger, or why a trained EPA PSD member could not protect the Administrator in a different location on the aircraft [than in the business or first-class section]," according to the February 2018 memo obtained by the senators.

"It is hard to reconcile the public statements of EPA, and the President, with these internal and external assessments. It may be that the materials we have been provided are incomplete and that EPA has additional information that justifies its public position," Carper and Whitehouse said in their letter.

"However, another view is that certain factions within EPA have justified the exorbitant taxpayer spending incurred by the Administrator’s first-class travel and large entourage of security personnel through unsubstantiated claims about threats to his security, either at the direction of the Administrator himself or others in the agency."

The senators added, "Either way, the EPW Committee has a responsibility to look into these matters."

Copied onto the letter was the EPA inspector general. The agency’s watchdog office has an open audit of EPA’s spending on Pruitt’s personal security detail, which is expected to be released this summer.