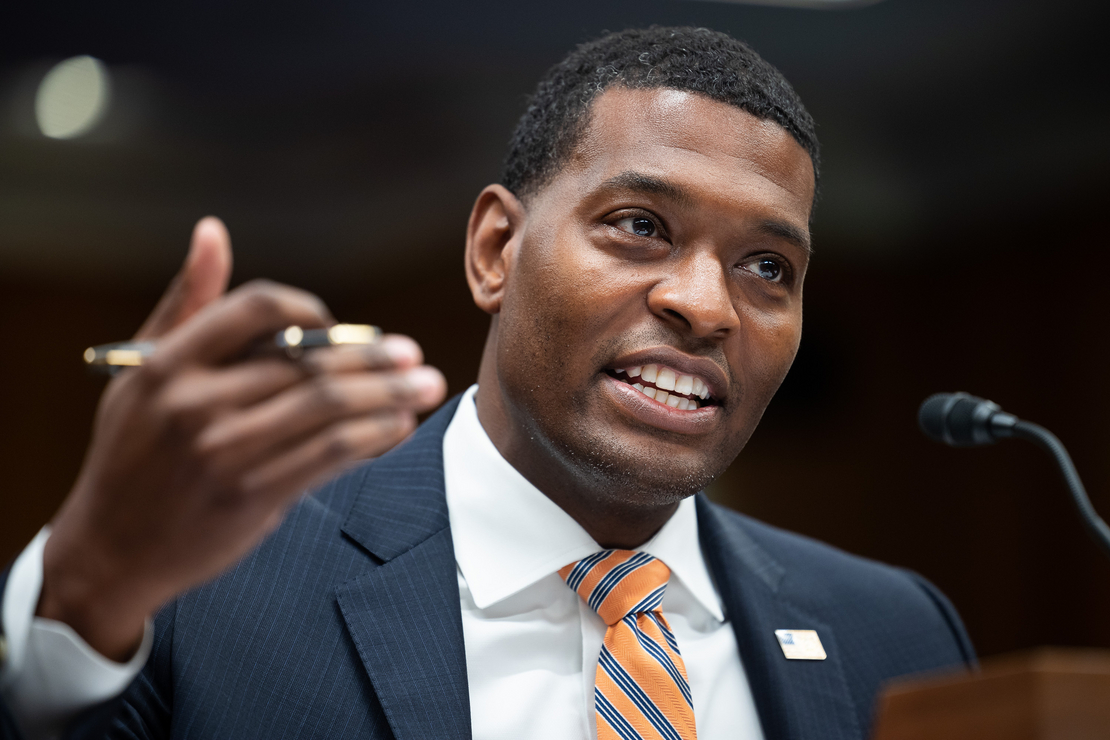 EPA Administrator Michael Regan this morning delved into the agency’s plans to fight climate change under a sweeping budget proposal.

Regan testified before the Senate Interior and Environment Appropriations Subcommittee. Lawmakers asked him to provide details on efforts to fight global warming as states face increasing threats from wildfires and storms.

Sen. Jeff Merkley (D-Ore.), chair of the subcommittee, pushed Regan to have EPA act with urgency on the “climate emergency.”

“The impacts are here now. We don’t have any time to waste,” Merkley said in his opening statement.

The Oregon senator later followed up with Regan, questioning where EPA’s budget plan stands on climate.

“What are the most important funding increases for making progress in tackling climate chaos? In staff? In research? In grants?” Merkley asked. “What’s the vision?”

Regan went through a number of EPA programs, including requesting an additional $35 million to reduce hydrofluorocarbons, a potent greenhouse gas, as well as pushing forward on emissions standards for cars and trucks with the goal of achieving “a lower-carbon transportation economy.”

In addition, EPA is working on technology standards to cut down methane from the oil and gas sector, Regan said. Further, the agency’s budget request slates $100 million for air quality grants as well as $60 million for climate change research.

“We’ve got some what I would call pragmatic but focused requests as it relates to climate change and public health,” Regan said.

Merkley asked when EPA will start awarding grants for electric school buses. Under the infrastructure law, the agency has $5 billion for a clean bus program for schools.

“We’re going to make an announcement very soon,” Regan said, estimating the first tranche of grants will be $500 million, with a second tranche being released a few months after.

The administrator added, “We want these resources to be able to go directly to the school districts.”

“Let’s get it in my field tractor. Let’s get that battery technology,” Tester said. “I would encourage you to do what we can do to get that and get it affordable. If it’s affordable and if it’s in the marketplace, people will change overnight.”

“I just want to ask for your pledge again that folks in the energy industry have an ability to come knock on your door and actually have their side of the story heard,” Capito said. “I sense some frustration with them.”

Regan noted he was in Houston recently for the CERAWeek by S&P Global conference and discussed methane capture with executives there.

“I’ve met with leadership from the power sector, the oil and gas sector,” Regan said. “It’s my understanding and personal experience that we are meeting with all of our stakeholders.”

President Joe Biden has requested almost $11.9 billion for EPA in fiscal 2023. That would be about a 25 percent boost over the agency’s current funds of $9.5 billion.

It is an expansive proposal that prioritizes the fight against climate change and elevates environmental justice at the agency. The budget would add hundreds of employees, seeking a total of more than 16,200 full-time workers, according to the agency’s congressional justification.

Congress isn’t likely to honor Biden’s EPA budget request. Lawmakers did boost the agency’s funding this year but did not match the president’s $11.2 billion ask for fiscal 2022.

Republican appropriators have told Regan they are skeptical about an expanded EPA. Sen. Lisa Murkowski (R-Alaska), the subcommittee’s ranking member, said there are “significant new increases” in the agency’s budget request.

“There are some proposed increases in the request that I can support, a number that I can’t,” Murkowski said.

In his opening statement, Merkley said EPA needs to be restored and that “major changes to our annual budget” are needed.

“We need to rebuild our environmental protection framework, which was battered by the decade of budget caps and by shortsighted efforts to deliberately dismantle or damage this framework,” Merkley said.