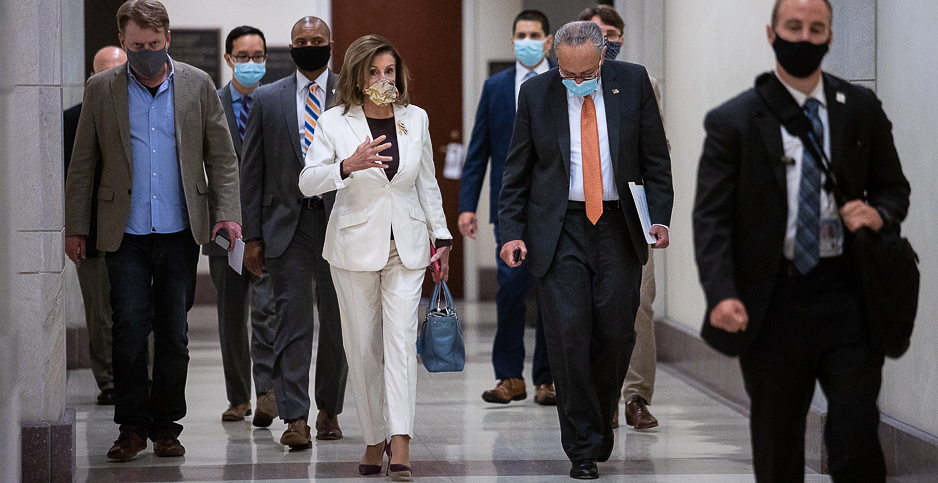 Senators left the Capitol yesterday under a cloud of uncertainty as talks on another package of COVID-19 relief continue to make little headway.

Majority Leader Mitch McConnell (R-Ky.) told senators he would give them 24 hours’ notice if a deal on pandemic aid should emerge but insisted he would keep the chamber in session in the meantime.

"The Senate will be convening on Monday, and I will be right here in Washington," he said. "The House has already skipped town, but the Senate won’t adjourn for August unless and until the Democrats demonstrate they will never let an agreement materialize."

But the prospects for a deal remain murky, with top Trump administration negotiators emerging from a three-hour meeting with Democratic leaders last night saying the two sides continue to be at odds over key issues.

"I would say we’re closer on a lot of issues; we’re still very far apart on some very significant issues," Treasury Secretary Steven Mnuchin told reporters afterward, adding that there would have to be "significant compromises on some big issues" to get a broad deal done.

Funding for state and local governments — a top Democratic priority — was one area where the two sides are "very far apart," Mnuchin said.

Democrats and Republicans are also at odds over whether to cut enhanced unemployment benefits that are already expired, as well as the size of the package.

Democrats additionally are resisting GOP "skinny" offers that address only some of the multiple issues in need of attention from the pandemic.

White House chief of staff Mark Meadows said Democrats had shown little willingness to deal during the meeting, which Trump dialed in to several times.

He said Trump remains ready to take executive action if necessary but would prefer a legislative solution. "We’re willing to stay engaged, but I can tell you that the differences are still significant."

Democratic leaders said it was the White House’s proposals that were insufficient, with House Speaker Nancy Pelosi (D-Calif.) likening them to a "Sophie’s Choice."

"Not enough money for food, nothing for housing in terms of rentals, a moratorium that’s nice, but it’s not money for rent; it isn’t," she told reporters.

"Not enough money for money in the pockets of the American people who really need this, who through no fault of their own [are] out of work. And certainly … when they said a skinny proposal, it was anorexic."

Schumer called on the White House to continue talks instead of issuing executive orders, which he said "will leave millions of people out."

"It will be litigated, it won’t be effective, and things will get worse," he said.

While current pandemic negotiations are focused on broader economic and health issues, members continue to press for the inclusion of relief for rural electric cooperatives in the next package.

Earlier this week, 22 House members from both parties urged the chamber’s leaders to include legislation, H.R. 7483, in the next relief package.

The National Rural Electric Cooperative Association, which supports the legislation, estimates it could save co-ops more than $10 billion by repricing $42 billion in RUS-backed loans at current interest rates — or about $2 million annually per co-op with typical RUS debt.

"Economic development has been part of electric co-ops’ DNA for decades and that element of community leadership will be critical as communities rebound from the public health emergency," he added. "This essential legislation will give co-ops the flexibility to manage financial shortfalls and focus on the long-term stability of the communities they serve."