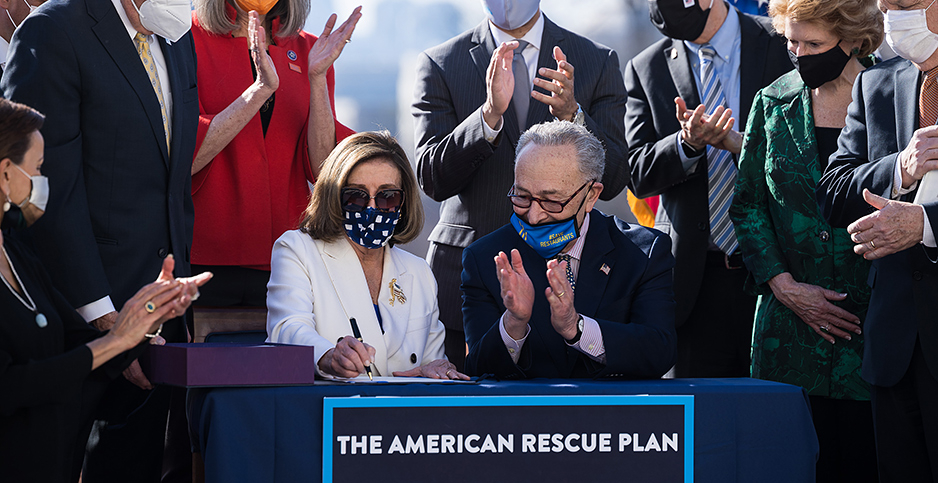 Senators are offering early optimism that they can find common ground and pass an infrastructure package later this year.

It’s expected to be the next big project now that Democrats have passed their $1.9 trillion COVID-19 package. President Biden will sign it tomorrow and deliver a prime-time speech tonight on what’s next.

Senate Environment and Public Works Chairman Tom Carper (D-Del.) yesterday reiterated that the foundation of the package will be a surface transportation bill he hopes to clear though his committee by the end of May. He expects it to then be combined with other infrastructure bills and become law by the end of September.

"There are a lot of things we disagree on here in our nation’s capital, one of the things where there’s broad agreement is to get to work on surface transportation," Carper told reporters today.

Carper said he and ranking member Shelly Moore Capito (R-W.Va.) have written to all 100 senators asking them for ideas on infrastructure priorities in their states. Carper and Capito want the input by mid-March.

The legislation could ultimately be a multitrillion-dollar package and the centerpiece of the Biden administration’s "Build Back Better" agenda.

Even though the focus is on bipartisanship, leaders are not ruling out using budget reconciliation again to avoid a Senate filibuster (E&E Daily, March 10).

Carper said EPW’s coming bill would "acknowledge the climate crisis is huge" and "it’s always getting worse." He brushed off concern that climate provisions could endanger GOP support, noting that both parties acknowledge the "huge challenge" poised by climate change.

Capito said she wants a deal, too. "That’s what we’re aiming for, obviously, in the committee, and there’s a lot of talk about it," she said.

"You know, at the highest levels, certainly the president mentioned that to me, and all of us — Carper, [Maryland Democratic Sen. Ben] Cardin and [Oklahoma Republican Sen. Jim] Inhofe — and so far, we’re moving in that direction."

Capito conceded, however, that she was "concerned" about the possibility that Republicans could get marginalized in the process, or not be given adequate buy-in during negotiations.

Cardin, a senior EPW member, said he’s confident that the Senate "can put together a bipartisan" plan and that Democrats "would like to see it as big as possible."

He cautioned, though, that the challenge will be passing that bill through Congress, where dynamics in the House are different than in the Senate and pay-fors remain an open question.

"First of all, I think in the House, quite frankly, the committee structure is more partisan than the Senate. Secondly, the House can pass a bill much more quickly, on a partisan basis, than the Senate can," Cardin said.

"Infrastructure brings us together. I think there is a hope that this could happen. But we also recognize the parameters of it, and the politics, may make it difficult at the end of the day."

Sen. Lindsey Graham (R-S.C.), a new member of the EPW Committee, called infrastructure "the best chance to do something together — maybe the only chance."

When asked what makes this time different than in the past, when an infrastructure package was also seen as a possible vehicle for broad consensus, Graham shrugged.

"People gotta try," he said, adding that he thought there could be agreement on redesigning the Highway Trust Fund and incentivizing use of electric vehicles.

"When the car companies say they’re going to stop making gasoline-powered cars in 2035, seems to me we ought to get with it in terms of dealing with that issue," said Graham.

Still, in a nod to where lawmakers could run into problems — particularly as the legislation gets bigger and more unwieldy — Graham laid down a marker of what he would need to see included to sustain his support: "We just wanna make sure it’s related to infrastructure."