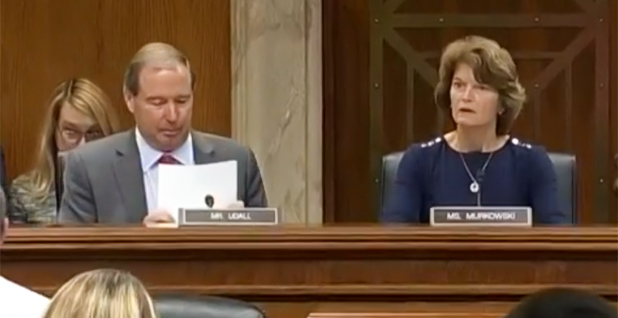 The Senate Appropriations Committee will release details of its funding bill for the Interior Department and EPA tomorrow.

The legislation has become one of the most contentious funding bills of the year, particularly with Republicans wanting to undo President Obama’s agenda. But with President Trump in the White House, the Republican desire for riders has eased.

"My hope and anticipation is the vote outcomes we saw … for [military construction and veterans] and [transportation] will be the same for our Interior approps bill," said Interior and Environment Appropriations Subcommittee Chairwoman Lisa Murkowski (R-Alaska). "That’s what we’re working towards."

The House Appropriations Committee approved its own Interior-EPA bill last week after an hourslong markup.

But even with talk of bipartisanship, the measure passed by party lines. And it includes a repeal of the Obama-era Clean Water Rule (E&E Daily, June 7).

Pressed on the Senate’s direction, Murkowski said, "It means that we are working towards consensus."

And when it comes to Democrats, she said, "Well, we’re trying to support every one of them if there isn’t a poison pill in there, so it’s been a pretty positive experience so far."

Beyond Interior-EPA, Senate appropriators will also take up legislation to fund the departments of Commerce and Justice, and science programs. Issues to watch will be how they handle climate and weather spending programs.

On the House side, appropriators will release and mark up their bill in subcommittee to fund the State Department and foreign operations. Climate money will also be an issue.

The full House Appropriations panel will vote on its financial services and general government bill, which includes language rolling back an Obama-era prohibition on international coal project financing and limits on Office of Management and Budget reviews of Army Corps of Engineers water projects.

Schedule: The Senate Interior and Environment Appropriations Subcommittee markup is Tuesday, June 12, at 9:30 a.m. in 124 Dirksen.

Schedule: The House Appropriations markup of the defense and financial services spending bills is Wednesday, June 13, at 12 p.m. in TBA.

Schedule: The Senate Appropriations markup on the Interior-EPA and Commerce bills is Thursday, June 14, at 10:30 a.m. in 106 Dirksen.