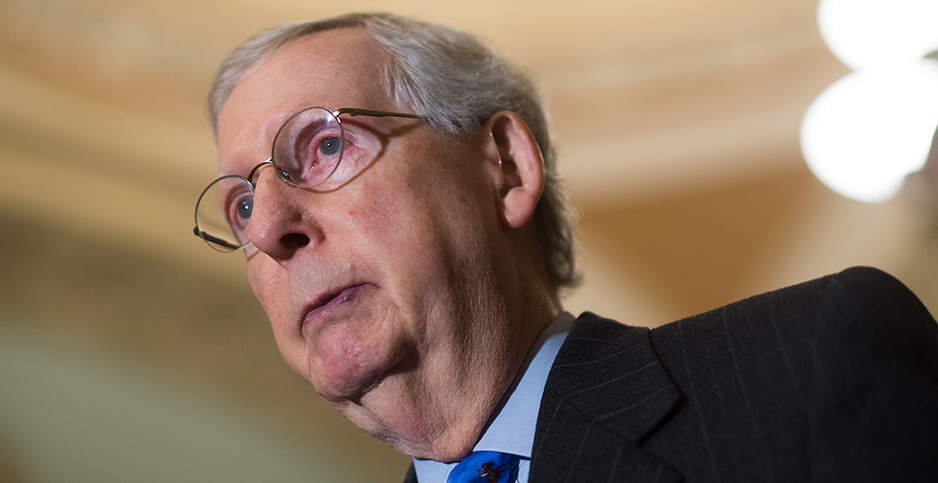 Senate Majority Leader Mitch McConnell (R-Ky.), shown here yesterday at the Capitol, laid out plans this morning to prevent a government shutdown at the end of this week. Kevin Dietsch/UPI/Newscom

The Senate will soon take up legislation that would extend federal funding for agencies through Feb. 8, but some lawmakers are threatening to block it for failing to reauthorize a politically popular conservation program and include other lands bills.

Senate Majority Leader Mitch McConnell (R-Ky.) announced plans for the continuing resolution this morning that would fund agencies covered by the seven appropriations bills yet to pass Congress.

Those include: EPA, and the Interior, Commerce and State departments, where tens of thousands of workers would otherwise face unpaid furloughs at the end of the week.

Lawmakers hope to clear the CR by Friday.

Senate Appropriations Chairman Richard Shelby (R-Ala.) indicated that disaster aid and other add-ons sought by senators from both parties were unwelcome.

"Right now, what he filed is clean, and we’d like to keep it that way," he told reporters.

But that position isn’t sitting well with some senators who are pushing for inclusion of a public lands package, which would call for extending the Land and Water Conservation Fund among other bipartisan measures.

Asked if they’re pushing for it to be added to the CR, she responded: "Making it happen."

Asked whether reauthorization for LWCF would be included in the CR, Sen. Steve Daines (R-Mont.) said, "It would be in a lands package. We are fighting for it right now."

A source familiar with the negotiations said Republican leadership suggested doing the lands package by unanimous consent, which supporters of LWCF are not interested in. Supporters think the UC move would fail.

"Let’s have an up or down vote on the floor of the Senate," Daines said.

New Mexico Democratic Sen. Martin Heinrich said there’s an "enormous amount" of support for attaching the lands package and accused McConnell of "unilaterally" deciding to keep it off.

"We’re trying and we’re going to keep trying until the last moment to get this done," said Heinrich.

The Wilderness Society also criticized the Senate GOP for proposing a CR without the bipartisan LWCF rider.

"There’s no good reason to block this historic win, the time to act is now by adding it to the CR," said Drew McConville, senior managing director for government conservation at the Wilderness Society.

The back-and-forth comes as congressional leaders have been unable to resolve a dispute over funding for a U.S.-Mexico border wall that has kept them from moving a year-end omnibus spending package that would have provided fresh dollars for all the remaining agencies.

The CR would provide yet another extension of the National Flood Insurance Program, which would otherwise see its authority expire at the end of the week.

It would also extend the Department of Homeland Security’s Chemical Facility Anti-Terrorism Standards (CFATS) program, which was due to expire at the end of the year.

Party leaders took turns this morning blaming one another for failing to reach a broader deal.

"I’m sorry that my Democratic colleagues couldn’t put partisanship aside and show the same good-faith flexibility that the president has shown in order to provide the resources our nation needs to secure the integrity of our borders and the safety of American families. But this seems to be the reality of our political moment," said McConnell.

Senate Minority Leader Chuck Schumer (D-N.Y.) said Senate Democrats would back the CR and called it "good news" that President Trump would no longer shut down the government over border wall funding.

The White House this week suggested it might be able to find the money elsewhere in the federal budget, although the administration would have limited authority to move the money without congressional approval.

The House is expected to back the CR tomorrow or Friday, House Minority Whip Steny Hoyer (D-Md.) said this morning.

He blasted the GOP for holding federal funding "hostage" to the border wall, noting there was bipartisan support on nearly all the other spending covered in the remaining bills.

Hoyer noted the spending bills Congress passed earlier this year, including for the Energy Department, cover about three-quarters of all appropriations work, so most agencies won’t be waiting on new funding next year.