Sessions bars settlement funds from going to outside groups 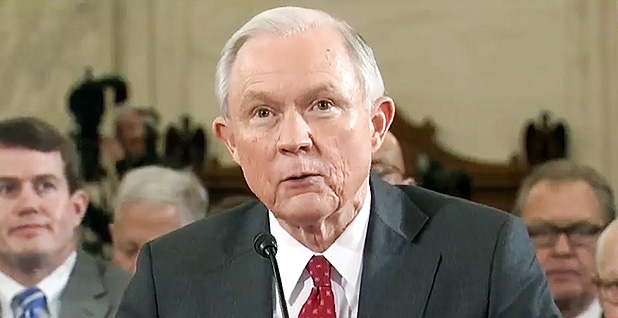 The Justice Department will no longer require companies to donate to nongovernmental third parties as part of criminal and civil settlements, a move that could block money from going toward environmental projects.

Settlement funds should only be used to compensate victims, redress harm, and punish and deter unlawful conduct, Sessions said today in a statement.

"When the federal government settles a case against a corporate wrongdoer, any settlement funds should go first to the victims and then to the American people — not to bankroll third-party special interest groups or the political friends of whoever is in power," Sessions said.

The change comes as House Republicans have complained that the Obama DOJ frequently funneled money to outside groups as part of settlements. They’ve characterized the payments as "slush funds."

Last September, the House passed a bill that would have barred all third-party donations, including funds going to states for supplemental environmental projects. The House Judiciary Committee passed a similar version of the bill earlier this year.

The government’s settlement with Volkswagen AG over the German automaker’s emissions cheating scandal has been a target of Republicans’ ire; the settlement directed VW to spend $2 billion over the next 10 years on zero-emissions vehicle charging infrastructure, public education and ride-sharing projects (E&E News PM, April 13).

According to today’s memo, DOJ will not be allowed to enter into an agreement settling federal claims or charges "that directs or provides for a payment or loan to any non-governmental person or entity that is not a party to the dispute."

"The Department will no longer engage in this practice," the memo said.

The memo provides for a few exceptions to the policy, including payments or loans that directly remedy environmental harm caused by a corporation’s action.

It was not immediately clear how the memo would affect ongoing settlement negotiations. In a pending settlement over excess emissions, Harley-Davidson Inc. agreed to pay for a fund for cleaner-burning wood stoves.

The Trump administration had already been slow-walking the settlement, according to prior reporting by E&E News (Greenwire, April 18).

The right-leaning group Cause of Action Institute also last week objected to the fund, which would be implemented by the American Lung Association of the Northeast (Greenwire, June 1).

In an emailed statement, the institute’s president and CEO, John Vecchione, applauded Sessions "for his bold reversal of the previous administration’s perverse pattern of using settlements with private companies to fund favored political projects. These deals were negotiated behind closed doors and funneled money to third party groups, rather than to the victims of the Defendant’s conduct."

The memo could also potentially affect any settlement DOJ enters into with Fiat Chrysler Automobiles NV, should the parties agree to one. DOJ last month sued the company for allegedly installing devices on 104,000 diesel vehicles that led to increased emissions of air pollutants (Greenwire, May 23).

Eric Schaeffer, a former top EPA enforcement official and executive director of the Environmental Integrity Project, said that having the option open for a company to fund supplemental environmental projects is key in negotiating settlements.

Defendants in enforcement cases are more willing to foot the bill for outside projects rather than pay more in penalties, which are seen as an admission of guilt or wrongdoing.

"Defendants are much more willing to pay for environmental projects because that helps them earn some good will and restore their reputation after they’ve taken a beating for causing some environmental disaster," Schaeffer said (Greenwire, June 2).