Sessions ‘not taking sides’ on Bundys 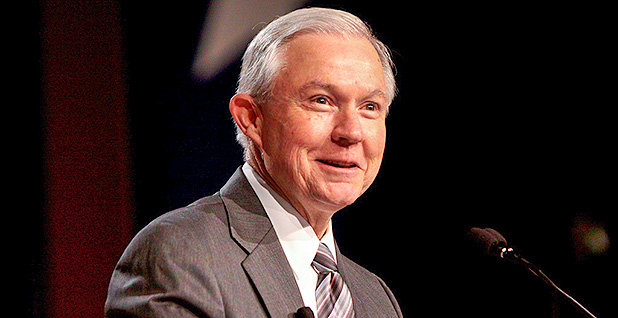 Attorney General Jeff Sessions said he would not take a side in the case over a 2014 standoff between supporters of rancher Cliven Bundy and federal agents. Gage Skidmore/Flickr

Attorney General Jeff Sessions yesterday praised the lead attorney in the government’s prosecution of Nevada rancher Cliven Bundy but also said he would not be "taking sides" in the trials related to the 2014 armed standoff between ranchers and federal agents near Bunkerville, Nev.

In an appearance in Nevada, Sessions briefly raised the Bunkerville trials to laud Nevada acting U.S. Attorney Steven Myhre, the Las Vegas Review-Journal reported. The government has divided its prosecution into three cases, one of which began a retrial this week after a jury deadlocked on charges against four of six defendants in April.

"I’ve got to tell you, it’s impressive when you have a tough case, a controversial case, and you’ve got the top guy leading the battle, going to court, standing up and defending the office and the principles of the law," Sessions said.

But he added: "I’m not taking sides or commenting on the case. Just want to say that leadership requires, a lot of times, our people to step up and be accountable."

Sessions’ refusal to take a position on the Bunkerville trials is notable because the Bundys and their supporters hoped the Trump administration would offer them some relief in their battle with the federal government.

During the 2014 standoff, Trump publicly praised Bundy in an interview on Fox News, while also calling BLM’s actions "over the top."

"I like him, I like his spirit, his spunk and I like the people that — you know, they’re so loyal," Trump said, according to a Fox News transcript of the interview. "I do like him. I respect him. He ought to go and cut a good deal right now [with the federal government]. That’s the best thing that could happen for everybody. It’s really vicious."

Trump added: "What’s he going to do? Are they going to start shooting each other over grazing fees?"

The standoff was sparked when Bureau of Land Management agents attempted to seize Bundy’s cattle over more than $1 million in unpaid grazing fees.

Requests for comment on Sessions’ remarks from the Bundy Ranch and Cliven’s wife, Carol Bundy, were not returned this morning.

But in a post to its Facebook account, the Bundy Ranch shared a link to the newspaper report along with Oakley, Calif.-supporter Doug Knowles’ comment: "Jeff Sessions throws Bundy ranch supporters under the bus."

Dozens of commenters echoed Knowles’ sentiment, pointing to the attorney general’s praise for Myhre as a signal of his support for the prosecution.

Interior Secretary Ryan Zinke does not comment publicly on ongoing court proceedings, although when asked about Sessions’ comments, an Interior spokeswoman pointed to Zinke’s promise to be a "good neighbor."

"The Secretary believes the federal government should be a good neighbor and a good land manager. His top priority since day one has been to return trust to local communities who work with the Department," spokeswoman Heather Swift told E&E News.

That echoes comments Zinke made to the conservative website Breitbart News in March.

At that time, Zinke asserted that conflicts like Bunkerville and the occupation of the Malheur National Wildlife Refuge in Oregon would be less likely to occur during the Trump administration.

"I would say the war is over with the new president and the administration," Zinke told the website. "We want to be the good neighbors."

Zinke said the federal government should work with local officials to defuse situations, rather than send BLM officials into contentious situations.

"We want to see when we have a law enforcement problem, our first line of defense is the local sheriff," he said.

He also told the website that local Interior officials should be embedded in their communities to serve as advocates rather than enforcers: "That’s a cultural shift, which I think is absolutely critical to the success of this organization long term."

During his congressional campaign in 2014, Zinke also expressed sympathy for the Bundys and asserted that local law enforcement officials should have been engaged in the standoff, rather than BLM agents.

"I grew up in Whitefish when the Forest Service had an older truck, and a bucket and a shovel," Zinke said at a debate in Kalispell, Mont., in May 2014 in response to a question about whether various federal agencies should have "paramilitary" capabilities.

"Now where did we go wrong down in Nevada where BLM and the Park Service has brand-new SUVs with blackened windows, weapons, Tasers and guard dogs? It scares me because not only was the government wrong, the rancher was wrong but he was wronged," he added. "And then Americans rushed to the scene from across the country, for what purpose? I assume to shoot other Americans."

In a video of the debate sponsored by Americans for Prosperity, loud murmurs can be heard from the audience before Zinke continues.

Among the 19 individuals indicted in the Bunkerville standoff was Gerald DeLemus, who served as co-chairman of the Veterans for Trump coalition.

DeLemus became the first person to be sentenced in the incident last month, when a judge sentenced him to 87 months in prison (Greenwire, June 1).

A former Marine sergeant, the 62-year-old pleaded guilty to conspiracy to commit an offense against the United States and interstate travel in aid of extortion in August 2016.

A new trial began this week for four other alleged participants in the 2014 standoff (Greenwire, July 10).

Cliven Bundy and his sons, Ammon, Melvin and David, are slated to face trial 30 days after the current retrial is concluded.