Sessions stalled FOIA reform — what would he do as AG? 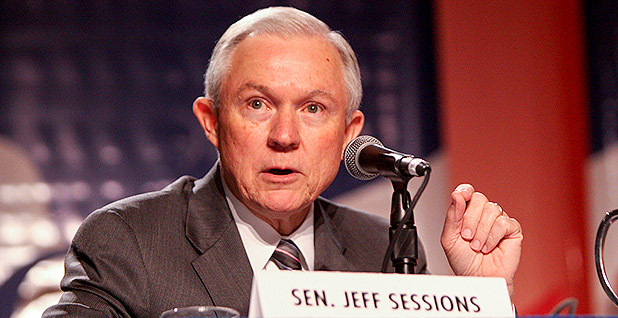 Earlier this year, Sen. Jeff Sessions (R-Ala.) slowed legislation that strengthened the Freedom of Information Act. Transparency advocates are now worried what impact he will have on the public records law as President Donald Trump's attorney general. Photo by Gage Skidmore, courtesy of Flickr.

Sen. Jeff Sessions managed to slow legislation this year that was aimed at strengthening the Freedom of Information Act.

By next year, the Alabama Republican could have an even greater impact on how the public records law is implemented if he’s confirmed as attorney general. As President Donald Trump’s top lawyer, Sessions would be able to set the tone on how the incoming administration deals with FOIA requests.

"We are concerned with how he would interpret FOIA and the guidance that he would put in place," said Rick Blum, executive director of the Sunshine in Government Initiative.

That worry stems from Sessions’ role in the eventual passage of the FOIA Improvement Act.

The bill’s approval now seems controversy-free — it passed the Senate by unanimous consent and then the House by voice vote before being signed into law by President Obama in June. That journey, however, was hindered by a quiet lobbying campaign against the legislation by several federal agencies, including the Department of Justice (Greenwire, July 1).

And the Justice Department had Sessions’ ear during the fight over the FOIA bill.

In 2015, Sessions raised concerns in a report filed on the bill after it was approved by the Senate Judiciary Committee (E&E Daily, March 5, 2015). He said DOJ as well as assistant U.S. attorneys told him a specific provision of the legislation could spark lawsuits.

"I am informed by both the Department of Justice and the National Association of Assistant United States Attorneys that the 25-year sunset provision on Exemption 5 could invite defendants and their lawyers to use FOIA as an alternative discovery tool in attempts to re-open closed cases," Sessions said in the report.

A former U.S. attorney and Alabama attorney general, Sessions added that "by subjecting such documents to potential disclosure, this legislation could chill government lawyers from offering candid advice and invite criminal defendants and their attorneys to re-open and re-litigate long-resolved cases."

Sessions was taking issue with the bill’s changes to FOIA’s Exemption 5, which bars disclosure of agencies’ records regarding internal deliberations. Under the FOIA Improvement Act, those records will be now released if they were created 25 or more years ago.

Sessions’ staff also tried to weaken that provision, albeit unsuccessfully, since it remained in the bill as is.

"I’m wondering if extending the [25-year] sunset would be something DOJ could support. Maybe making it 40 years or something? Do you have any suggestions or thoughts?" then-Sessions aide Rachael Tucker wrote in an email to Justice that was uncovered in litigation by the Freedom of the Press Foundation and reported on by VICE News.

Transparency advocates who lobbied for the bill told E&E News that Sessions placed a hold on the legislation as well. The Alabama senator’s office didn’t respond to requests to comment for this story.

Sen. John Cornyn (R-Texas), one of the FOIA bill’s main sponsors, told E&E News they were able to work out disagreements over the legislation with Sessions.

"We were, obviously, ultimately able to work out the differences, and I can’t even remember exactly what the details were, but I think he will not be an impediment to our continued efforts to reform the Freedom of Information Act," Cornyn said, adding that he thought Sessions would be "a good attorney general."

‘Withhold at any cost’

The episode over the FOIA bill has left open-government advocates believing Sessions will not be a fan of disclosure as attorney general.

"Given Sen. Sessions’ lack of support for a more robust FOIA, I am concerned that under his leadership, DOJ will revert to a ‘withhold at any cost’ regime," said Anne Weismann, executive director of the Campaign for Accountability, in an email to E&E News.

She said, "Attorneys general for decades have had a lot of authority in setting the tone and policy for FOIA implementation governmentwide, and their FOIA policies have differed radically."

What to watch on FOIA will be the attorney general’s memorandum on guidelines dealing with the public records law, typically issued early on in a new administration.

Eric Holder, Obama’s first attorney general, issued such a memo, as did John Ashcroft under President George W. Bush. That document will set forth how the administration deals with FOIA.

"There is the overall tone he sets for all federal agencies — whether it sounds pro-disclosure or anti-disclosure — plus what he says about the procedural aspects of handling FOIA requests, such as interpreting them fairly and searching carefully for responsive records, and whether he is going to encourage a hard-line approach on the imposition of fees and the treatment of requests for fee waivers," said Dan Metcalfe, former director of the Justice Department’s Office of Information and Privacy, now called the Office of Information Policy, which oversees FOIA across the federal government.

"He could say we will defend what you do so long as it is legally defensible. That would send a poor signal for FOIA requesters, one that could embolden agencies to overwithhold information," said Metcalfe, now an American University Washington College of Law professor.

"A big part of the signal, of course, is how quickly he [Sessions] issues this FOIA memorandum," Metcalfe said. "Is FOIA on his radar? Will he do a quick but comprehensive job on it? Or will it take him months?"

Holder’s and Ashcroft’s tones in their memos were different on FOIA.

Holder set forth "a presumption of openness" under FOIA, which has now been codified into law by the FOIA Improvement Act. Ashcroft warned agencies to be careful in releasing records and said the Justice Department would defend their decisions to withhold documents.

Patrice McDermott, executive director of OpenTheGovernment.org, said she guesses "the pendulum will swing back to Ashcroft" under Sessions as attorney general.

"There is a worry that they [Justice] could return to Ashcroft, which is if you can come up with a legitimate reason to withhold it, we will defend it," McDermott said. "I could see a Sessions Justice Department going that way."

Blum said Sessions could have a big impact on the public records law.

Weismann noted the FOIA Improvement Act made the presumption of openness part of the public records law, but DOJ still has some say on how it is defended in court.

"Attorneys general and DOJ more generally still have a fair amount of latitude, especially in their decision when to defend agencies sued under the FOIA," Weismann said. "I fear the Trump administration generally will be against transparency, and DOJ will be the agency charged primarily with ensuring secrecy."

Trump’s transition team didn’t respond to requests for comment for this story.

Sessions is now moving along in the nomination process. Democrats have said they need more time to deal with Trump’s pick for attorney general, but Senate Judiciary Chairman Chuck Grassley (R-Iowa) has said he is sticking to his original plan of holding two days of hearings on Sessions beginning Jan. 10.

Sen. Patrick Leahy (D-Vt.), another main sponsor of the FOIA Improvement Act and a Judiciary Committee member, said FOIA will come up at Sessions’ hearing.

"I think that’s one of the things he’ll be asked about," Leahy said. "A whole lot of us will be asking questions."