Set back and under the gun, industry struggles with next steps 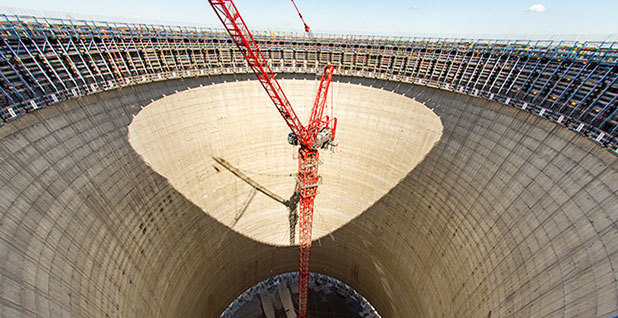 Construction continues on the cooling tower of Plant Vogtle Unit 4, one of two reactors being built by Georgia Power Co. Photo courtesy of Georgia Power.

One utility may close a third of its nuclear fleet, having lost the economic battle to natural gas and renewables.

Another wants to submit a new licensing application to federal nuclear regulators in under two years.

And a third recently said the costs of its nuclear project will rise another $852 million because of a new agreement with contractors.

This is a snapshot of a nuclear industry in flux.

"Given the problems we’ve had with the only two nuclear units that we’re building, it’s not a healthy place to do business," said Mark Barnett, a utility analyst with Morningstar Inc.

Troubles at reactor projects in the Southeast are just part of the problem. Last week, Chicago-based Exelon Corp. announced plans to shut down a third of its nuclear fleet, sustaining tens of millions of dollars of losses each month (EnergyWire, June 3).

Three nuclear plant closures have been announced in the past few weeks in the Midwest. Nationwide, operators of 11 reactors, including Exelon, have either been shut down or have announced plans to do so.

The situation is not as dire in the Southeast, where most of the reactors operate under tight regulation. Economics are still at play, however, analysts said.

In the Southeast, Southern Co.’s Georgia Power Co. subsidiary is hashing that out right now as part of its long-term planning process with regulators and a wide range of consumer, environmental and industry advocates. The utility is building two reactors at its Plant Vogtle site but is eyeing space in western Georgia for two more sometime after 2030.

The utility hasn’t committed to building, but it is on an aggressive timeline. The company wants to submit an application for a combined operating license (COL) to the Nuclear Regulatory Commission in late 2018, Georgia Power spokesman John O’Brien told EnergyWire on Friday.

Georgia Power enjoys strong political and regulatory support in its home state, but the company has hit a snag with a portion of its request. The issue isn’t over whether the electric company should add more nuclear to its fleet, it’s about spending $175 million on preparation work now.

The discussion is part of Georgia Power’s integrated resource plan, which regulators will vote on in July. Veteran Georgia Public Service Commissioner Lauren "Bubba" McDonald wants to take up the topic of capitalizing those nuclear costs three years from now, during the 2019 IRP.

McDonald floated a draft proposal at a committee meeting last Thursday. He made it clear that he’s supportive of nuclear and that, frankly, he wants Georgia Power to build more.

But if the timeline isn’t until well into the 2030s, there’s no need to charge ratepayers now, McDonald said.

"I think again I have stated many times I want us to continue to see through Unit 3, Unit 4, it’s going to be a great asset to this state down the road," McDonald said at the meeting. "But I think it’s a little premature for us to commit ratepayers to something so far down the road."

Georgia Power’s lawyers did not comment during the meeting. O’Brien said in a statement that the utility will stop preliminary work at its site in Stewart County if McDonald’s motion comes up for a vote and passes next month.

"A delay of even a few years in these actions will jeopardize our ability to keep new nuclear as a timely option for customers," O’Brien said.

Why time is of the essence

Georgia Power gives a number of reasons for getting started on a nuclear project now. A chief one is cutting down regulatory red tape, one of the main detractors of building reactors.

The utility said it faces a number of time pressures, according to recent filings with the PSC. One is an expiring operating license at Plant Hatch Unit 1, which will happen in 2034. The industry is pushing to extend licenses so reactors can operation for 60 and 80 years, but it’s unclear whether that will happen.

Secondly, Georgia Power is adding twin reactors at Plant Vogtle using an amended AP1000 reactor design, which NRC approved in 2011. The agency approved the original design as a template in 2006.

New reactor designs have a life span of 15 years, which means the AP1000 would have to be reapproved in 2021. The NRC is using 2006 as the reference date even though the design being used for Vogtle was approved five years later.

Georgia Power said it will take 17 years to permit and build new reactors. This includes seven years to obtain the necessary license from federal nuclear regulators and 10 years to prep the site and build the reactors, as well as run them through a wide range of startup testing.

However, developing and getting a COL cuts down the overall timeline by 40 percent, O’Brien said, without supplying details.

The company is sticking to its message that it must start now to ensure it can add nuclear later.

"We are considering all factors in order to be able to pursue a COL and maintain new nuclear as an energy option for our customers in the future," O’Brien said.

‘The nuclear ecosystem is in disarray’

A protracted regulatory approval process is just part of the challenge. Georgia Power and SCANA Corp.’s South Carolina Electric & Gas Co.’s current projects are roughly three years behind schedule and more than $1 billion above their original cost, which give investors little confidence that future projects will be different.

For one thing, Georgia Power has said its project is more than halfway finished, based on several contractor milestones, or building and putting major pieces of the project in place. The Public Service Commission’s utility finance director revealed a more sobering figure during a recent hearing, however: Just 20 percent of the nuclear island — essentially the core of a nuclear plant — has been finished in four years.

"The nuclear ecosystem is in disarray, and that’s why you’re seeing two-year, three-year, five-year delays," Barnett at Morningstar said. "The arguments that the industry will make is, ‘Once we get past this first round, things will be better,’ the problem is once we get past that you’re going to have technologies that are 20 years old, and someone else is going to have a better idea."

Georgia Power and SCE&G recently settled lawsuits with their project’s contractors, which were the chief reasons behind the delays. The projects now have a better chance of finishing on time and budget, the utilities say.

SCE&G recently made a key decision on its V.C. Summer project. The company told regulators it will tie the remaining amount of the project — after June 30, 2015 — to a fixed price.

The fixed-price option raises all of the costs to Westinghouse Electric Co. by 11 percent, or by $852 million, according to recent filings. This brings the company’s 55 percent share of the total construction cost to $7.6 billion but caps its share of liquidated damages from earlier lawsuits to $372 million.

The South Carolina Public Service Commission must approve the change.

Correction: An earlier version of this story included an incorrect reference date for the AP1000 reactor.