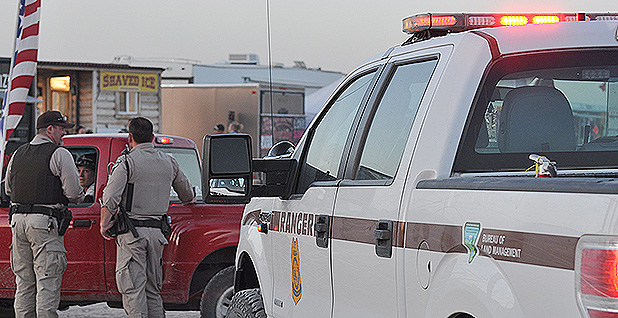 The Bureau of Land Management is reshuffling the leadership of its law enforcement program once again with a new acting director taking the reins of a department that has been in transition for nearly a year.

Out is Jason O’Neal, who since last June had served as acting director of BLM’s Office of Law Enforcement and Security.

In his place as acting OLES director is Shannon Tokos, who was the department’s acting deputy director of operations.

BLM made no announcement about the leadership change, but Tokos is now listed on BLM’s organization chart as acting OLES director.

O’Neal is still listed on the OLES website as the acting director.

But O’Neal returned to his "normal duties" as assistant director of the Bureau of Indian Affairs’ Office of Justice Services months ago, according to an emailed statement BLM sent to E&E News.

"Shannon Tokos has been serving as Acting Director since Mr. O’Neal’s return to BIA" on Feb. 14, it read.

The latest moves continue an ongoing trend of temporary leadership at OLES, which employs about 270 rangers and special agents tasked with enforcing federal laws and protecting natural resources on the 245 million acres of public lands that BLM manages.

The law enforcement office has not had a permanent chief since BLM removed former director William Woody last year and placed him on administrative leave. The bureau did so following an Interior Department Office of Inspector General investigation that found Woody had used a "government-owned vehicle" for work for nearly a year without filling out the appropriate paperwork (Greenwire, June 17, 2019).

Woody was escorted out of the Interior’s Washington headquarters and required to surrender his firearm and badge.

O’Neal came on two weeks later from the Bureau of Indian Affairs to fill in for Woody on an acting basis (Greenwire, June 26, 2019).

Some have questioned whether a so-called paperwork violation warranted removing a senior leader like Woody, who last year filed an age discrimination and disability complaint against Interior that demanded he be reinstated to the director’s position he held off and on since 2003.

Woody and BLM apparently resolved that complaint, and Woody is no longer employed at the bureau (Greenwire, Jan. 24).

The leadership status at OLES mirrors BLM overall, as most of the bureau’s senior leadership is serving on an acting basis. That includes William Perry Pendley, BLM’s acting chief since last July.

The vacuum of permanent leadership at BLM in general, and the law enforcement office specifically, concerns Ed Shepard, president of the Public Lands Foundation, a BLM retirees’ group.

"OLES is especially important because of the high risks involved in law enforcement," said Shepard, who retired in 2012 after a 38-year career at BLM.

"Consistent, permanent leadership is needed to ensure field leadership is moving in one direction," he said. "In BLM, all of the agents report directly to the OLES director and not through the state directors."

He added, "There are so many actings in BLM leadership and so many leadership positions that have been vacant for long periods that it’s hard to keep up with who is doing what."

Not much is known about Tokos, who has been at OLES for years. Before serving as acting deputy director of operations, she was chief of the OLES Special Investigations Group based in Grand Junction, Colo. — home of the bureau’s new headquarters.

In addition to O’Neal and Tokos, Loren Good holds the position of deputy director of policy and programs in the law enforcement office on an acting basis.

Meanwhile, the search for a permanent OLES director continues.

BLM last week had to advertise the OLES director’s position on USAJobs for the second time since January (Greenwire, April 28).

Some observers say this is a sure sign the bureau is having trouble finding qualified applicants; others say the abrupt nature in which Woody was removed may be scaring away qualified law enforcement officials.