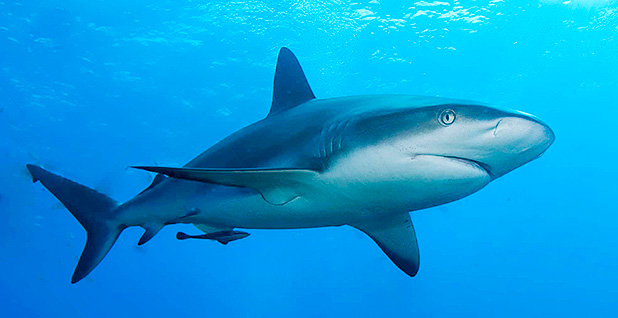 President Trump may still hate sharks, but they found a lot of love on Capitol Hill yesterday.

Scientists sang the praises of the once-vilified animals at a Senate hearing, urging Congress to spend more on shark research to aid in the search for more medical breakthroughs.

"We have turned the tables from treating sharks as man-eating monster … to viewing these animals with admiration, respect and appreciation for their important role in the sea and their value in contemporary research," testified Robert Hueter, director and senior scientist at the Center for Shark Research at Mote Marine Laboratory in Sarasota, Fla.

While they made no promises of delivering more money, members of the Senate Commerce, Science and Transportation Committee were quick to talk up the top predators of the oceans.

"My home state of South Dakota has a long history with sharks, a connection at least 70 million years old, from a time when South Dakota was covered by shallow seas," said Sen. John Thune (R-S.D.), the panel’s chairman.

He showed off a fossilized tooth from a Ginsu shark, saying it had teeth "sharp enough to take down the occasional dinosaur."

Thune said shark scientists are already improving lives and "pushing the boundaries of what we know." He cited two examples: research on the aerodynamics of shark skin that has helped improve the design of airplanes, and shark cartilage that’s helping burn victims heal faster.

Responding to the chairman, Sen. Bill Nelson (D-Fla.), the committee’s ranking member, said: "You definitely taught me something I didn’t know, that South Dakota had sharks."

Nelson said sharks are important to the economy of his home state and that Florida is "trying to lead the way in shark research."

For researchers, including four who appeared before the committee, trying to overcome the negative image of the animals has been a long haul.

Amy Kukulya told the panel that, like many Americans, she got introduced to sharks with "Jaws," the 1975 smash hit that showed the animals attacking swimmers near a New England tourist town.

"That movie is now more than 40 years old, but I believe it remains the primary reason why — when people think about sharks at all — they generally imagine ferocious eating machines that are a significant threat to humans," said Kukulya, the principal investigator and autonomous underwater vehicle operations engineer at the Woods Hole Oceanographic Institution, a nonprofit organization based in Massachusetts.

Kukulya said that "strategic government investment" helped in the development of the "SharkCam," an underwater robot that allows researchers to track and follow tagged sharks and investigate their behavior.

"Despite their importance, we still don’t know where most sharks go for much of the year or why, where they mate, or where they give birth," she said.

Alistair Dove, vice president of research and conservation for the Georgia Aquarium in Atlanta, said the public’s changed perception of the shark as a "cherished charismatic icon is welcome and overdue."

He said Congress could help scientists by providing better access to satellite systems that allow them to track sharks with electronic tags, describing it as a "particularly vexing problem."

Dove said more research is also needed on what happens to sharks when they eat plastic trash in the oceans.

"We shouldn’t be surprised to see the ocean plastic crisis expressing itself in sharks," he said.

Cheryl Wilga, professor and director of the biological sciences department at the University of Alaska, Anchorage, said the biggest challenge facing researchers is funding.

Shark conservation groups reported an increase in contributions earlier this year when news broke that Trump reportedly had a death wish for all sharks.

In the interview, Daniels recounted a meeting with Trump, when she observed him watching a Shark Week special on television.

"He is obsessed with sharks. Terrified of sharks," Daniels said. "He was like, ‘I donate to all these charities, and I would never donate to any charity that helps sharks. I hope all the sharks die.’"