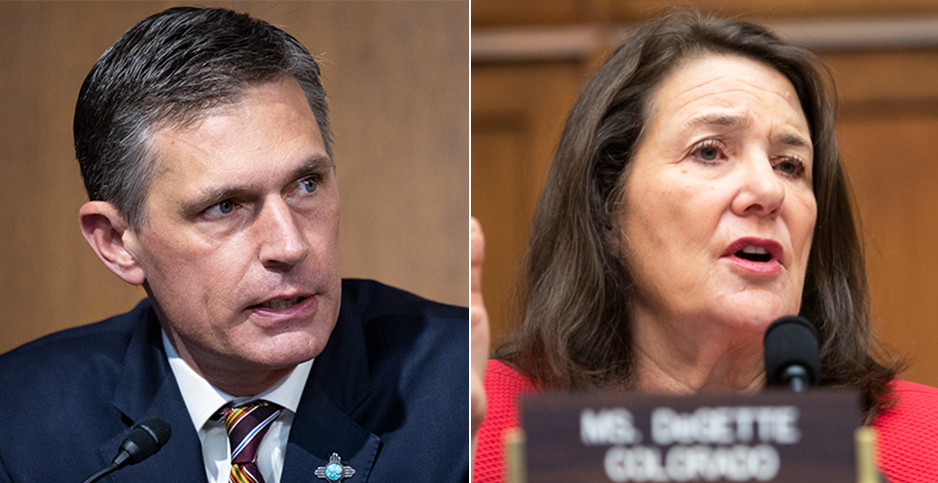 Three top oil and gas companies are throwing their support behind Democrats’ push to restore an Obama-era rule on oil and gas methane emissions.

Royal Dutch Shell PLC, Equinor ASA and BP PLC are calling on lawmakers to support a resolution — S.J. Res. 14 and H.J. Res. 34 — that would give "no force or effect" to Trump administration rulemaking that undid direct federal oversight of methane, a potent gas that exacerbates climate change.

The energy industry has become increasingly vocal about tackling methane emissions since the Biden administration took office and in the face of mounting investor pressure.

And despite support from some top firms, the oil and gas industry as a whole has largely withheld support of the Congressional Review Act resolution that would allow lawmakers and the president to quickly kill the Trump rollback.

"We need to restore the direct federal regulation of #methane emissions — and we urge Congress to approve the methane resolution under the Congressional Review Act," Shell U.S. tweeted last week.

In a similar tweet, Equinor said it backs direct federal methane regulation as "an important step on the pathway to net-zero."

Josh Hicks, a BP spokesperson, said the company "supports the direct regulation of methane emissions from new and existing sources across the value chain" and backs efforts by lawmakers to "advance this important goal through the Congressional Review Act."

Under the Congressional Review Act, lawmakers and the president have a short window to rapidly eliminate rules that were finalized within 60 legislative days, or roughly six months. Democrats introduced five CRA resolutions, including to repeal a Trump climate-related finance rule (E&E Daily, March 29).

So far, oil and gas industry support for the Democrats’ legislative maneuver on methane is coming from Europe-based firms.

Several other U.S. oil and gas companies, including ConocoPhillips and Valero Energy Corp., did not respond to requests for comment.

"We have an opportunity to build on the progress the industry has made in driving down methane emissions through technological advancement, and we are committed to finding common ground on cost-effective government policies," Jessica Szymanski, an API spokesperson, said in a statement.

Given API’s pledged support for direct federal methane regulation, some advocates questioned why the trade group hasn’t backed the resolution.

"There is no credibility to API supporting methane regulation as a general concept then ducking for cover when there’s a live bill to make methane regulation a reality," Ben Ratner, a senior director at the Environmental Defense Fund, said in an email.

"API will struggle to get a seat at climate policy tables for as long as it fails to support real policies that make a real difference like the methane CRA," Ratner added.

Supporting the resolution, he said, is a way for companies to show stakeholders through actions that they’re serious about climate solutions.

Andrew Logan, head of oil and gas research at the environmental investor group Ceres, offered two possible explanations for why companies are speaking out in favor of the resolution.

One is a recognition of the Biden administration’s pledge to regulate methane, and another is the risk emissions pose to the reputation of natural gas.

"The more thoughtful companies understand that methane emissions are a huge threat to the reputation of natural gas, and so they want to avoid that reputational hit," he said.

Industry sources expected the oil industry to neither voice support for the resolution nor lobby against it. They stressed that the CRA is a "blunt tool" that could muck up the agency’s ability to regulate methane emissions in the future.

That’s because the law contains a provision that would prohibit the agency from in the future promulgating a rule that is "substantially the same." However, exactly what that means is unknown because it has never been tested in court.

The White House did not return a request for comment yesterday. But Sarah Smith, a program director at Clean Air Task Force, said her understanding is that the administration does support the resolution because "it clears away some of the rubble from the Trump resolution, which makes it easier for EPA."

Last week, EPA Administrator Michael Regan told Reuters there’s more room now than during the Obama years to ambitiously target methane. In an email, an agency spokesperson added that Regan believes that the market and technologies have evolved to provide "the opportunity for a fresh look at the sector."

"But contrary to the tweets sent out by Equinor and Shell, regulating methane will not make gas clean, or a solution to the climate crisis," Stockman said in an email.

"These companies’ plans to expand their gas business cannot be justified by support for methane reduction," he added. "We’ll be much more excited when they announce a clear plan to reduce oil and gas production in line with climate limits."