‘She’s tougher than you.’ Meet a top contender to lead DOE 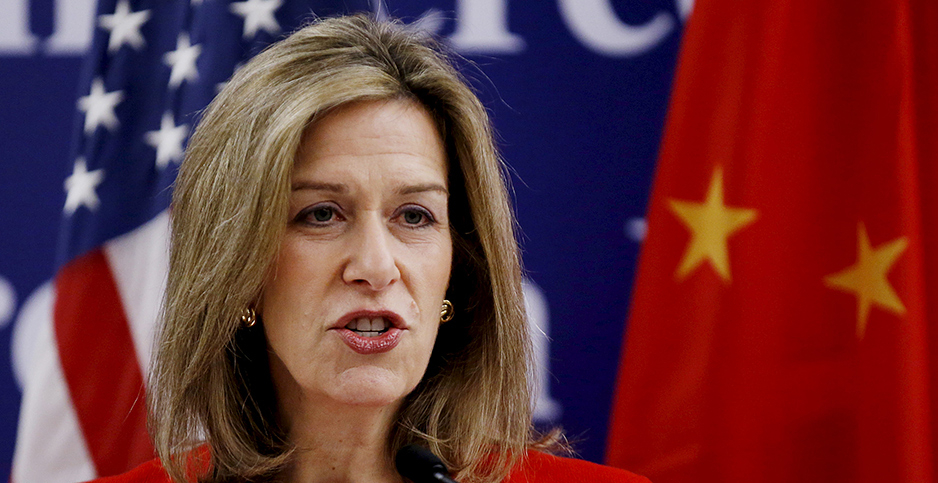 Former Department of Energy Deputy Secretary Elizabeth Sherwood-Randall is in the running to lead DOE in the Biden administration. Kim Kyung-Hoon/Reuters/Newscom

A leading candidate for Energy secretary in the Biden administration, Elizabeth Sherwood-Randall already boasts an endorsement from the president-elect.

Sherwood-Randall has the intellect and the temperament to handle "any job in this administration," then-Vice President Joe Biden said in 2014 as he swore in his former Senate aide to a top job at the Department of Energy.

"It was apparent three decades ago, and she’s proven [it] every day since," Biden said.

The personal connection could prove critical as Biden considers candidates for the top post at DOE. According to multiple sources, Sherwood-Randall is in the running, as is former DOE Advanced Research Projects Agency-Energy Director Arun Majumdar and a few others (Energywire, Oct. 5). Even if she doesn’t get the nod for secretary, sources say Sherwood-Randall could play a major energy role at DOE or in another agency, especially given that Biden’s Cabinet selections have shown a preference for those he’s worked with during his long Washington career.

Boosters say Sherwood-Randall knows every office in DOE’s sprawling bureaucracy after nearly three years as deputy secretary to former Secretary Ernest Moniz. They say she could help Biden deliver on his promise to transform the power grid to all carbon-free energy by 2035.

"The Biden administration wants to hit the ground running with a lot of focus on what they can do on day one," said Karen Wayland, who was senior adviser for domestic energy policy to Sherwood-Randall and co-chairs Clean Energy for Biden, a group that backed Biden’s campaign. "With the state of the agencies, they’re looking for experienced hands, and Elizabeth is the whole package."

Environmental activists are pressing Biden to appoint climate hawks across his government, but Sherwood-Randall’s experience is largely centered on national and nuclear security. Sherwood-Randall served in the Obama White House from 2009 to 2013 as special assistant to the president and senior director for European affairs at the National Security Council.

Still, two-thirds of DOE’s budget is directed to nuclear security, including weapons stockpile maintenance, testing and nonproliferation. It also handles waste cleanup at several sites across the country.

Wayland argues that in addition to her nuclear and national security credentials, Sherwood-Randall also handled energy issues as second in command at DOE and understands climate change from a global perspective.

"She’s spoken about how you can’t restore the credibility of the United States in the international sphere without credibly addressing climate emissions in the U.S.," Wayland said. "She’s very focused on what that means for domestic climate and energy policy."

At a 2016 address to a Women in Clean Energy symposium at Stanford University, Sherwood-Randall noted that while the Paris climate accord had "ambitious" goals, "we realize that will not be enough. We need to accelerate the transition to a low-carbon economy and spur innovation and science and technology … so that we can power the world with low-carbon power."

The DOE post would need Senate confirmation, and Sherwood-Randall would likely be a noncontroversial choice in a potentially Republican-led Senate. She was easily confirmed in 2014, with Brent Scowcroft, a national security adviser under Presidents Ford and George H.W. Bush, telling senators at her confirmation hearing that "she knows how to get hard things done."

Sherwood-Randall’s proximity to Moniz has drawn some criticism from green groups who oppose Moniz because of his embrace of President Obama’s "all of the above" energy approach, including a role for fossil fuels.

"It is absolutely imperative that @JoeBiden keep @ErnestMoniz out of his cabinet, and any of his protégée like Liz Sherwood-Randall," Evan Weber, political director for the youth-driven climate advocacy group Sunrise Movement, tweeted in November.

Sherwood-Randall noted in a Council on Foreign Relations speech in 2016 that "all of the above" meant clean energy and carbon capture and storage for fossil fuels.

"Many countries around the world will need to use an energy mix that includes fossil fuels for decades to come," she said at the time, telling a questioner that the department had engaged in conversations with oil and gas companies about how fossil fuels could be used responsibly.

"She has her own opinions and her own head and her own ideas," said Jill Hruby, former director of the Sandia National Laboratories, who said she participated numerous times in talks between Sherwood-Randall and other energy leaders: "In no way were those one-way discussions, I can assure you."

Hruby said Sherwood-Randall’s experience across the agency gives her an ability to motivate DOE’s various factions.

"She understands how to get the most and the best out of people and understands that what an organization does is dependent on the people and the mission," said Hruby, who in 2015 became the first woman to lead one of the United States’ three national security labs. "And she comes in not from the energy industry, not from a laboratory, but with broad knowledge."

Sherwood-Randall began her career in 1986 working for then-Delaware Sen. Biden as his chief foreign and defense policy adviser when he served on the Senate Foreign Relations Committee.

She was 26 at the time and had earned a graduate degree from Oxford University, where she was among the early ranks of female Rhodes scholars.

She later served in the Clinton administration as deputy assistant secretary of Defense for Russia, Ukraine and Eurasia, and led the effort to remove nuclear weapons from three former Soviet states.

She would work with Biden later while she served in the White House, advising him on a variety of topics, including energy security in Europe.

Biden swore in Sherwood-Randall as deputy Energy secretary in 2014 at DOE headquarters, talking fondly about her parents and her husband, a neurosurgeon.

"There are two things you figure out about Liz very quickly," Biden said. "One, she’s tougher than you. Two, she’s smarter than you."

Sherwood-Randall offered her own tribute to Biden, saying he had inspired her to be "fierce" and "relentless in the pursuit of what is right."

She added, "We have a lot to do together, from advancing the president’s all-of-the-above energy strategy and Climate Action Plan to ensuring that the nuclear enterprise remains safe, secure and effective."

After leaving government at the close of Obama’s term, Sherwood-Randall joined Harvard University as a senior fellow at its Belfer Center for Science and International Affairs, focusing on national and energy security, "including research on cutting-edge science and technology essential to our nuclear security and to a clean energy future," the university said at the time.

She’s also a professor at Georgia Tech, with joint appointments at the Sam Nunn School of International Affairs and the Strategic Energy Institute.

Sherwood-Randall was active in Biden’s presidential campaign, knocking on doors in Iowa and headlining fundraising and get-out-the-vote efforts.

She was also a member of Biden’s foreign policy "Kitchen Cabinet" and informally advised the Biden team on a range of energy, climate, diplomatic and national security issues.

DOE in recent years has assumed more responsibility for cybersecurity, and is active in protecting power grid infrastructure. And Sherwood-Randall played a critical role in pulling together a coordinating council among energy company CEOs, said Kevin Knobloch, a former president of the Union of Concerned Scientists who served as Moniz’s chief of staff.

"She brought the gravitas and seriousness of purpose to that effort and had the respect of all of those CEOs across the country," said Knobloch, who is now president of federal policy at Massachusetts-based Anbaric, a developer of electric transmission projects. "It’s the kind of thing that without strong government leadership, the competitiveness of the sector gets in the way. It’s not easy to herd those cats, but she pulled it off, and it was impressive."