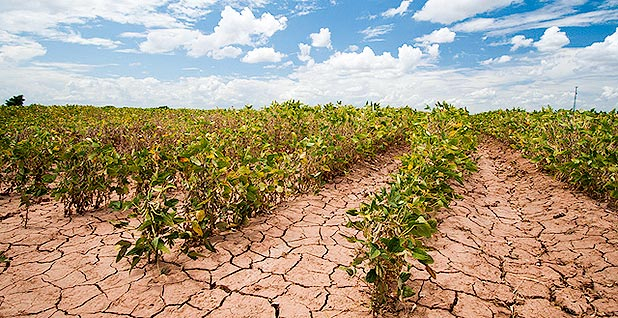 Soybeans show the effect of the drought near Navasota, Texas, in this 2013 photo. The National Climate Assessment, among other things, compiles the best scientific research available on how climate change is affecting the United States. Photo by Bob Nichols, courtesy of the Department of Agriculture.

Its acronym is just obscure enough to be benign, so little-known that even people in the know stumble over the name of the federal program that guides much of the country’s climate research.

That’s exactly what the U.S. Global Change Research Program appears to want right now, as Congress and the Trump administration go on the prowl for places to cut federal money for climate research.

No one with the program itself will discuss its status. Many former employees also declined to speak on the record about the USGCRP, saying they fear that bringing attention to the agency would threaten its existence and its main work product, the National Climate Assessment.

Their fears aren’t without merit. President Trump on his first day in office released policy directives that pledged to eliminate the Obama administration’s 2013 Climate Action Plan. The National Climate Assessment released in 2014 was a supporting document for that agenda.

Those who have worked on the most recent National Climate Assessment worry about what they’ve seen from the Trump administration. They say the impact of the assessment is invaluable. And those who would talk on the record warn that scaling back climate research would be short-sighted.

"We’ve already seen the Trump administration starting to walk down the path of muzzling scientists, removing peer-reviewed science from agency websites or at least ordering that," said Cathleen Kelly, who in her time in the Obama administration worked at the White House Council on Environmental Quality and sat on the federal advisory committee that oversees the national assessment process.

"This is a path of propaganda; this is a path of ‘alternative facts’ or withholding the latest peer-reviewed science from the public," said Kelly, now a senior fellow on the energy and environment team at the Center for American Progress, a left-leaning think tank.

"I think there’s a political purpose at play here," she added. "If the American people don’t have information about climate change threats, then it removes the sense of urgency around the need to curb change."

The assessments, the first of which was released in 2000, are required by Congress every four years. They convey the current state of climate science. Adaptation was a significant focus in the third and most recent iteration.

The USGCRP program got its start in the late 1980s, when top officials at multiple federal agencies began looking for a way to collaborate on the emerging science of global warming. Congress in 1990 passed a law establishing the Global Change program, and President George H.W. Bush signed it into law.

That year, the president’s budget called for spending more than $1 billion on climate research. The White House science adviser at the time, Allan Bromley, said then that global change "may well represent the most significant societal, environmental and economic challenges" facing the United States and the world, a statement that would prove prescient more than 25 years later.

One of its requirements is "to submit to the president and the Congress an assessment regarding the findings of the program and associated uncertainties, the effects of global change, and current and major long-term trends in global change."

The program itself doesn’t conduct the research, which one former employee valued at between $6 billion and $7 billion a year. Rather, it relies on 13 separate federal agencies to conduct research, as well as fund its administrative budget.

If science is ‘settled,’ you don’t need funding

The newest version of the National Climate Assessment is underway, set to be released in 2018. In December, the USGCRP released a draft containing much of the science that the next assessment will be based on. Then, days before President Obama left office, it quietly submitted a strategic plan outlining its goals through 2021.

David Reidmiller, who directs the National Climate Assessment, said in a statement shortly after his appointment in October that the program will continue to build its capacity for conducting climate assessments on an ongoing basis, rather than every four years. That will allow new information and insights to be synthesized and communicated as they emerge, he said. Program officials have been doing that already, with interim reports issued on climate change and food security, and on the health impacts of warming, he said.

Documenting change is not enough, though, he said. The goal is to provide a platform where community resilience successes can be shared and adopted by others.

"The agencies of the U.S. government have been working tirelessly over the past few years to produce some really innovative tools and products to help the American public better understand and address the impacts of climate change on the things they care about," Reidmiller said in an October statement announcing his appointment.

Marcia McNutt, president of the National Academy of Sciences, also wouldn’t answer a question about the future of the next assessment, even though her institution has a major role in its development. The National Academies of Sciences, Engineering and Medicine includes the Board on Atmospheric Sciences and Climate, a standing committee that provides advice to the U.S. Global Change Research Program.

So far, the USGCRP doesn’t appear to be directly on the chopping block, although that could change when Trump releases his first spending plan this winter. No one in Congress has singled it out specifically, although Sen. Maria Cantwell (D-Wash.) warned that it was at risk last week during a confirmation hearing for Energy secretary nominee Rick Perry, the Republican former Texas governor.

"I do not understand why President Trump appears to be so hostile to these programs," Cantwell said. "The Energy Department’s energy efficiency programs and standards are expected to save American consumers and businesses $2 trillion on their utility bills by 2030, while reducing carbon pollution by at least 3 million metric tons. This is not a partisan issue. I worked with the last Bush administration on getting the U.S. and China, the two biggest emitters of pollution, to work together on clean energy solutions."

Many of the people who have worked on it say they take some heart that the USGCRP and the National Climate Assessment are congressionally mandated. The only way to completely gut it would be to starve the research budgets of the agencies that pay for the science.

"My primary concern is that the overall investment in climate research by the federal government is likely to decline," Koizumi said.

That concern is not unfounded, said Sterling Burnett, an environmental researcher at the Heartland Institute, a Chicago-based organization that holds annual conferences to challenge the idea that people are causing climate change. Heartland also claims that rising levels of carbon dioxide can be economically beneficial.

"My suspicion is it will see a budget reduction. I don’t think it will be zeroed out, by any means," Burnett said. "I don’t see it as an assault on science. I see it as a shift in where he’s going to invest dollars for the U.S."

Researchers who focus on areas like near-term weather forecasts, crop yield or fisheries might fare better, he said.

Every time the president hears "the science is settled," it means there will be less money for that area of research, he said.

Koizumi and many others say what they fear is far more likely to happen is that the upcoming assessment could be less robust, or that it could be released quietly rather than be promoted. The webpage for the 2014 version, used to support Obama’s climate agenda, saw more than 1 million visits from its debut in 2014 through the summer of 2016.

The USGCRP appears to be anticipating that possibility.

Last week, the program released an outline of what it will be doing in the coming year. The next National Climate Assessment will for the first time feature chapters on air quality; international effects; and the interplay of impacts across sectors like agriculture, water resources, human health, energy and transportation.

It will also include separate sections on the Northern and Southern Great Plains and a section on the U.S. Caribbean. The assessment will feature a response section that focuses on adaptation and the reduction in risk that can be realized by curtailing carbon emissions.

Local governments in particular rely on regional information in the assessment, Kelly said.

"The risk is if the assessment is dumbed down or weakened or even canceled, it would really undermine smart city and state planning, disaster preparedness, and policymaking for years to come," she said. "Users and decisionmakers just wouldn’t have access to that up-to-date, cutting-edge, peer-reviewed science."

Kathy Jacobs, who served in the Obama administration as the assistant director of the Office of Science and Technology Policy and oversaw the most recent assessment, said the strength of the National Climate Assessment is not necessarily in the finished product. Its power comes from the process of the submissions and collaborations of 300 authors and more than 1,000 contributors. Their work provided support for nonscientists by taking what she called "geeky" language and translating it into something that "people find accessible and useful."

"Much more important than getting the report done was our whole vision and approach for doing the work," Jacobs said. "It was very powerful to bring voices from all over the country together, and to try to build what we hope was a sustained process. Really, the idea of co-creating knowledge is very powerful."

Susanne Moser, a California-based scientist who worked on the coastal chapter of the last assessment, has studied the policy effects of the Pacific Islands Regional Climate Assessment. The assessment, and the consortium of experts who worked on it, allowed people to create a hub of information that continues to be of use.

Moser, who studies ways of helping people understand the challenges and risks of climate change, has advocated for the next assessment to be as practical and useful as possible to an audience outside the scientific community.

She also urged the assessment’s leaders to incorporate the wisdom of regional scientists, not just those in federal agencies. That was a strength of the 2014 assessment, she said. It created networks of scientists who could carry on climate research outside the assessment framework.

"We were hellbent on building a community around us, not just a report that comes out of Washington and that’s it," she said. "To share the work on it and engage a lot of people around it, and have them all feel like they’re working on this national goal and also something really meaningful for them regionally.

"Then, when you have someone like a Bush or a Trump come into office, that community still stands," she added.

Jacobs, now the director of the Center for Climate Adaptation Science and Solutions at the University of Arizona, said it’s her hope that the Trump administration will see the value of the assessment, as well as the process it takes to produce it.

"Honestly, if I were a person with a business or running a corporation, I would absolutely want this information, and I would want it to be of the absolute highest quality," Jacobs said.

Trump and his family, after all, have multiple business interests at stake, from his golf courses in Scotland to his Mar-a-Lago club in Palm Beach, Fla.

"He has properties that are likely at risk," she said. "It’s in his best interest to be prepared."