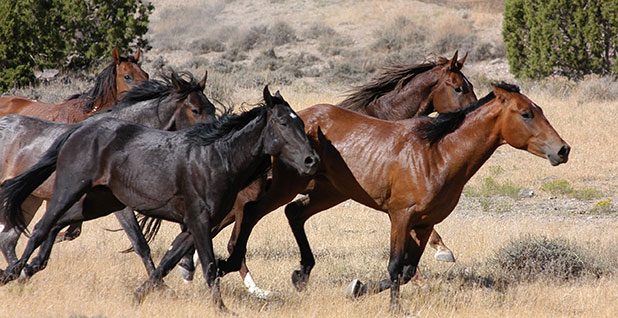 A Bureau of Land Management advisory panel has recommended BLM either sell or euthanize the roughly 46,000 wild horses and burros it has removed from federal rangelands. Photo courtesy of BLM.

The Bureau of Land Management’s decision last week to cancel a research project testing surgical sterilization methods for wild mares has once again ignited a fierce debate over how best to deal with growing herds of wild horses and burros that critics say are damaging Western rangelands.

BLM announced Friday it was canceling the research partnership with Oregon State University to study the "safety and effectiveness" of three fertility control methods on wild mares in the face of several federal lawsuits from wild horse advocate groups. Those groups challenged the research as "inhumane" (E&ENews PM, Sept. 9).

Now BLM’s National Wild Horse and Burro Advisory Board is recommending the agency take aggressive steps to sell the more than 40,000 wild horses it has rounded up and is caring for in corrals — and euthanize those horses it cannot sell or adopt.

The advisory board’s resolution approved at a meeting Friday in Elko, Nev., says BLM should take aggressive steps to comply with the Wild and Free-Roaming Horses and Burros Act of 1971 "by offering all suitable animals in long- and short-term holding being unadoptable for sale without limitation or humane euthanasia."

"Those animals deemed unsuitable for sale," the resolution states, "should then be destroyed in the most humane manner possible."

The proposal has sparked heated debate on both sides of the issue.

"While cancellation of the sterilization experiments is a major victory, Americans will not stand by and allow the killing of tens of thousands of wild horses in holding facilities," said Suzanne Roy, executive director of the American Wild Horse Preservation Campaign. "If the agency thought the public was opposed to sterilization, wait until it sees what happens in response to the proposed mass killing of these American icons."

For its part, BLM has no intention to hold large-scale sales or make any attempt to slaughter excess animals, said Jason Lutterman, a spokesman for the agency’s Wild Horse and Burro Program.

For one, Congress has attached stipulations in Interior appropriations bills, including the fiscal 2017 legislation, prohibiting BLM from using federal money to sell wild horses, or to destroy any of the animals, BLM says.

BLM released a formal statement this week stating that the agency "is committed to having healthy horses on healthy rangelands. We will continue to care for and seek good homes for animals that have been removed from the range."

Nor does it have the resources to care for the 46,000 horses and burros over the life of the animals, the agency says.

BLM Director Neil Kornze told a House Appropriations subcommittee in March that the agency is "overwhelmed" by the growing herds, which are causing environmental harm to vast swaths of rangeland (E&E Daily, March 4).

Dave Eliason, president of the Public Lands Council, which represents livestock ranchers who use public lands, praised the advisory board’s recommendation. Eliason called it a move to "take heed of this epidemic" and try to find a solution.

"Watching these horses starve to death or die of dehydration because the population has exceeded what the range can hold is simply unacceptable," he said. "The Department of [the] Interior must bring these populations back to a sustainable and responsible level."

Indeed, the Congressional Western Caucus, composed of Republican leaders in Western states, today issued a "Bull Report" criticizing BLM for canceling the research project with Oregon State University "under the threat of litigation by a special interest group."

"If the horse population was properly managed, the rangelands could be restored and ample food and water would be available to the animals that these lands must support," the report says. "But the BLM has now called off even mere research into spaying and neutering methods already deployed on a large scale by the veterinarian community in a safe and effective manner.

"Federal land managers and Congress must find a solution to the exploding population growth before further irreparable damage is done," it adds. "It is inhumane to these wild horses and burros for special interest groups to bring lawsuits against humane management practices."

Meanwhile, advocacy groups that filed federal lawsuits to stop the sterilization experiments, which included testing a procedure to remove both ovaries from wild mares that had been rounded up, said BLM already has an effective fertility technique at its disposal — porcine zona pellucida, or PZP, which renders mares infertile for roughly a year.

"The sterilization research was a path to destroying wild horses, by destroying the very essence of what makes them wild — their natural behaviors," said Ginger Kathrens, the executive director of the Cloud Foundation and a member of the BLM Wild Horse and Burro Advisory Board.

Kathrens voted against the recommendation.

"Now we must remain vigilant to ensure that the agency does not pursue the ‘euthanasia’ of wild horses in holding or the castration of wild stallions, and instead works with advocates to develop wide-scale, humane PZP fertility control programs as recommended by the National Academy of Sciences three years ago."