Should DOE get out of the research business? 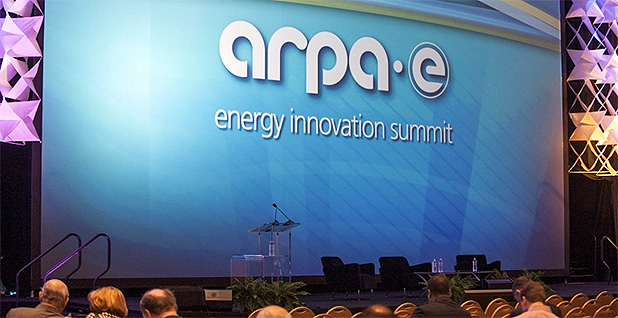 President Trump's budget proposal would eliminate three programs that have been used to foster low-carbon energy, including the Advanced Research Projects Agency-Energy. Photo courtesy of the Energy Department.

The budget outline that President Trump released yesterday proposed a historic scaling-back of research and development by the Department of Energy, upending decades of bipartisan consensus on the department’s mission.

Trump thinks that the federal government is meddling in the market and that it should limit itself to basic research and shift the billions of dollars it spends on applied research and commercialization to private industry.

Meanwhile, many entrepreneurs who receive DOE research funding see themselves as helping the United States gain a competitive edge in a global energy sector that is being transformed by new technology. That level of private money, they say, simply doesn’t exist.

"This is the worst time in history to do this, and it will lead to America losing in the next 10 years," said Saul Griffith, founder of Otherlab, a private California research facility that gets half of its funding from DOE. "Germany and China will come marching in."

On the other side are conservative think tanks like the Heritage Foundation, which have great sway in forming the Trump administration’s views on energy matters (Greenwire, Jan. 27).

"There is not a lot of need for the federal government to be involved in improving solar panels," said Katie Tubb, an energy and environmental policy analyst for the Heritage Foundation.

"When the federal government does back a technology, there are a dozen other technologies or companies they aren’t funding. One of those could actually serve the needs of the market better," she added.

DOE would see its budget cut 5.6 percent under the plan, but the ax would go much deeper in research. That’s because the parts of the department that modernize the nuclear weapons arsenal and clean up nuclear waste would see an increase of 11.3 percent, while everything else would be cut 17.9 percent.

The slimmed-down $28 billion budget asks Energy Secretary Rick Perry to find places to downsize at the Office of Energy Efficiency and Renewable Energy (EERE), Office of Nuclear Energy, and Office of Electricity Delivery and Energy Reliability.

These offices oversee a great deal of the funding for the nation’s 17 national laboratories, which includes R&D for all sorts of energy, from smart grid and nuclear power to solar and oil drilling.

Trump’s budget proposal specifically eliminates three programs that have been used to foster low-carbon energy: the Advanced Research Projects Agency-Energy, the Innovative Technology Loan Guarantee Program and the Advanced Technology Vehicle Manufacturing loan program, all of which were created under Republican President George W. Bush and expanded under President Obama.

The U.S. energy-industrial complex has been growing for decades, and DOE labs and joint public-private projects have been crucial in developing industries from nuclear energy to hydraulic fracturing.

More recently, Obama used those same mechanisms, along with new ones, to nurture a host of new energy technologies like solar, wind, electric cars and energy storage that reduce carbon emissions and are only beginning to find their place in the energy mix.

It is unclear how a DOE retreat would affect today’s system, where federal and state governments, universities, and companies big and small team up in complex, expensive efforts to turn a promising technology into actual product, a process that can take a decade or more.

It’s also unlikely that Trump’s broad-brush declarations will keep their bold outlines in Congress, where every energy project has its own constituency.

Trump’s budget blueprint contains contradictions. In one sentence, it says that reduced DOE funding "reflects an increased reliance on the private sector to fund later-stage research, development, and commercialization of energy technologies" and places a focus on basic research instead.

In the next, it says it wants to "enable American energy independence and domestic job-growth in the near to mid-term" — which basic research can’t do but that later-stage R&D and commercialization can.

Removing DOE from the research funding equation would cut in both directions.

"The government funds our competitors," said Marc Juzkow, the president and founder of Iontensity, a private battery research lab in Livermore, Calif. One such competitor is a battery lab at Argonne National Laboratory in Illinois.

The reality is that the web of development can be complex, where the end result is part domestic and part foreign, part government and part private industry.

Tesla Inc., for example, took $465 million loan guarantees to build its electric-car factory, now the largest manufacturer in California. It paid the loan back in full nine years early. Now it funds its own battery research — at Dalhousie University in Nova Scotia.

Bosch Ltd., the German engineering and electronics giant, entered the U.S. energy storage market two years ago by buying Seeo Inc., a maker of solid-state lithium batteries funded in part by a $300,000 grant from the SunShot Initiative, which is part of EERE.

And DOE has given millions of research dollars in recent years to GE Hitachi Nuclear Energy, a partnership between U.S. and Japanese industrial giants, to improve the technology for nuclear plants.

If the government were to shift applied research and development to the private sector, the burden would land mostly on large companies with big budgets. Several of those companies did not return requests for comment on this story.

An exception was General Electric Co., which said through a spokeswoman, "It’s too early to speculate on the current budget proposal."

Smaller companies that do research funded by DOE were not so reticent.

ITN Energy Systems Inc., a battery developer outside Denver with 22 employees, gets about half of its funding from the Energy Department. Some of its products are commercialized, but its new redox-flow battery, which lowers costs for energy storage, is not.

"It’s not really to where I can go and look for investment from outside," said Ashutosh Misra, ITN’s vice president. "It’s a couple more years of work before I can persuade investors it’s ready."

A loss of funding from the Energy Department, he said, "will basically chop off one of our arms."