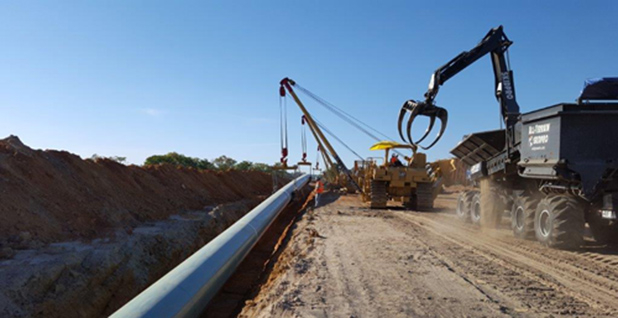 Pieces of the Sabal Trail pipeline are lowered into place during 2017 construction. Sabal Trail Transmission LLC

A natural gas pipeline that was on the brink of forced shutdown now seems to be in the clear, as federal judges agreed yesterday to delay a court order that would have halted operations.

The U.S. Court of Appeals for the District of Columbia Circuit granted federal regulators’ request to delay issuing a mandate that would require Sabal Trail and the broader Southeast Market Pipelines Project to halt construction and operations.

The court agreed to hold off on the mandate through March 26. That gives the Federal Energy Regulatory Commission time to finish its work on a climate review the D.C. Circuit ordered last year.

Yesterday’s decision is a major blow to environmentalists whose legal challenge to Sabal Trail was set to make history by shutting down a major gas pipeline for climate concerns.

"The courts have ruled that the environmental analysis of the Sabal Trail Pipeline was incomplete, and every day that it is allowed to operate is another day it does unknown harm to our climate and communities," Kelly Martin, director of the Sierra Club’s Beyond Dirty Fuels campaign, said in an email.

The pipeline network is designed to move natural gas through Alabama and Georgia to Florida power plants.

The Sierra Club sued over FERC’s approval of Sabal Trail last year, arguing that the agency failed to closely consider its impact on climate change. The appeals court agreed and in August ordered FERC to do a supplemental analysis to calculate greenhouse gas emissions associated with burning natural gas delivered by the pipeline.

The August decision would have vacated the pipeline’s FERC certificates and forced it to shut down, but FERC and developers Spectra Energy Partners LP, NextEra Energy Inc. and Duke Energy Corp. have been pushing the court to rethink that aspect of its decision.

The court mandate that would have triggered the shutdown has been on hold throughout that debate. In February, the judges were poised to finally issue it, but FERC and the developers made a successful last-minute bid to buy time (Greenwire, Feb. 7).

A shutdown of Sabal Trail would have been historic. Courts rarely block pipelines, even if regulators are found to have fallen short of the National Environmental Policy Act, and they have never halted a pipeline for inadequate climate review.

The pressure is now on FERC to complete its review within the extra time allotted by the court. The judges denied a separate request from the pipeline developers to delay the mandate for even longer.

The agency already finished the most labor-intensive part: the supplemental environmental impact statement (SEIS) ordered by the D.C. Circuit last year. But it hasn’t yet issued an order reauthorizing the pipeline project based on the updated analysis.

FERC released the SEIS in early February and typically needs at least 30 days to issue a final decision based on an environmental review.

An agency spokeswoman declined to comment on the D.C. Circuit’s decision yesterday but noted that FERC lawyers have assured the court that the agency will complete its decisionmaking process by March 23.

As long as FERC stays on schedule, Sabal Trail is poised to avoid any interruptions. Parts of the pipeline network are already in service and delivering gas to Florida power plants; other sections are still under construction.

"We appreciate the court giving FERC the time it has requested to issue an order on remand and we look forward to FERC issuing that order soon," project spokeswoman Andrea Grover said in an email.

ClearView Energy Partners analyst Christi Tezak said the court’s approach is a way of "keeping the Commission’s feet to the proverbial fire" to fix its climate analysis.

"FERC may have successfully bought additional time to fix the permit through its unsuccessful rehearing request in October and the shorter request for a stay of the mandate in early February, but the court declined to issue a blank check on timing," she wrote in a memo last night, noting that the commission’s final order could come any day.

The decision to delay the mandate was made by Judge Judith Rogers, a Clinton appointee, and Judge Thomas Griffith, a George W. Bush appointee.

Tezak said other pipelines aren’t likely to face the same problems because FERC has made analysis of downstream greenhouse gas emissions part of its standard practice.

"We believe the Commission plans to remain diligent on these reviews to lower the risk of permits being reversed on judicial review," she said.

The Sierra Club and other environmentalists have already criticized FERC’s SEIS. They say it’s just a shallow look at anticipated greenhouse gas emissions and does not give necessary context to the numbers.

The review estimates that burning gas from the pipeline network could increase Florida’s emissions 3.6 to 9.9 percent over 2015 data.

But the document declines to say whether that increase is "significant." FERC says there’s no widely accepted definition of what’s considered significant for greenhouse gas emissions, so it would be "inappropriate" for the agency to make that call (Energywire, Feb. 6).

Environmental lawyers say that’s a cop-out. In a brief to the D.C. Circuit last month, the Sierra Club argued that the analysis falls short of what the court ordered last year.

Martin, the Beyond Dirty Fuels director, vowed that the group will keep pushing against Sabal Trail.

"We will keep using every tool we have to shut down this dirty, dangerous fracked gas pipeline," she said.