Shutdown continues, but end may be in sight 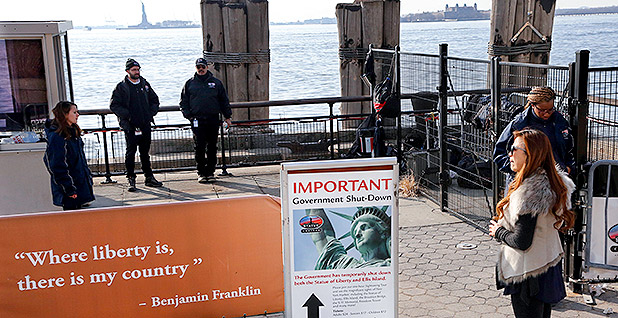 The Statue of Liberty was closed over the weekend because of the government shutdown. Mark Lennihan/Associated Press

The Senate adjourned late last night without a deal to end a government shutdown, which is entering its third day.

The chamber was supposed to hold a procedural vote at 1 this morning on a continuing spending resolution to open the government through Feb. 8.

"Let’s step back from the brink, let’s stop victimizing the American people, and let’s get to work on their behalf," McConnell said last night.

Schumer said: "I am happy to continue my discussion with the majority leader about reopening the government. We have had several conversations. Talks will continue. But we have yet to reach an agreement on a path forward that would be acceptable for both sides."

Despite a continuing war of words, Schumer and McConnell appeared closer to a deal than earlier in the weekend, with the Republican leader promising action on a variety of bipartisan priorities.

That includes the so-called Dreamers, individuals who came to the U.S. illegally as children. Of several reasons Democrats have given for opposing legislation to keep the government open, failure to reach a deal with the GOP and White House on these immigrants appears the most pressing.

Environmental groups have released statements warning of the potential public health consequences of a shutdown, and backing the Dreamers.

"It would be my intention to proceed to legislation that would address [Dreamers], border security and related issues," said McConnell. "It is also my intention to take up legislation regarding increased defense spending, disaster relief and other important matters."

Yesterday, a group of Senate moderates from both parties met to push a compromise. And even though the White House insisted the president would not negotiate on immigration unless Democrats agreed to help reopen the government, Republicans paint him as deeply involved in trying to end the impasse.

Vice President Mike Pence kept a trip to the Middle East, but President Trump canceled a planned escape to his Palm Beach, Fla., home. And it’s unclear whether he will be able to leave this week as planned for the World Economic Forum in Davos, Switzerland.

Trump was active on Twitter, saying, "Democrats are holding our Military hostage over their desire to have unchecked illegal immigration. Can’t let that happen!"

The president also again floated the idea of scrapping the filibuster and allowing the CR to move by simple majority. McConnell has been cool to such a move.

The House had been scheduled to leave for a weeklong recess Friday but stayed in Washington all weekend waiting for the Senate to act.

The lower chamber last week passed a CR to extend funding through Feb. 16. But leaders advanced a rule to allow for quick consideration of whatever plan senators pass.

On Saturday, the Trump administration went forward with its shutdown plans. Office of Management and Budget Director Mick Mulvaney sent out a memo to agency heads to close up shop.

"Unfortunately, we do not have a clear indication that the Congress will act in time for the President to sign a Continuing Resolution before the end of the day tomorrow," Mulvaney wrote.

"Therefore, agencies should now execute plans for an orderly shutdown due to the absence of appropriations."

Federal employees deemed "excepted" will keep working during the shutdown. Others will head into work for a few hours today to help implement shutdown operations and then return home. The rest will not report to work while the shutdown is on.

As late as Friday, agencies were still updating contingency plans. The White House’s own plan has 152 out of 371 West Wing aides staying on the job.

At the White House Council on Environmental Quality, three people out of its 13 employees are considered exempted under the plan.

Still, despite the shutdown, some agencies planned to stay open for days. U.S. EPA employees are expected to report for work today, and the agency has enough funds to keep humming along for some time — a message Administrator Scott Pruitt reiterated on Twitter on Saturday (E&E News PM, Jan. 19).

The administrator did have to cancel a planned trip to Japan because of the lapse in appropriations.

Mulvaney over the weekend told reporters EPA was using "unobligated balances," otherwise known as "carry-forward funds," to stay open. That’s different from the 2013 shutdown, when the agency closed once funding expired.

Mulvaney said the administration was planning operations "mostly a day at a time" while it waits on new funding approved by Congress.

"The funds that I mentioned, some agencies are sitting on quite a bit of carry-forward funds. They could go out longer without being impacted; and some have none, so they’d be impacted immediately," Mulvaney said.

Closure of national parks during the 2013 federal government shutdown became a contentious issue, but the Trump administration is keeping national parks open, although no one will be picking up the trash or cleaning the bathrooms during the shutdown.

On "Fox News Sunday," Mulvaney said Trump wants to keep as many federal employees at work and as many agencies open as possible, adding that the effects of the funding lapse will not be as visible as in 2013, which he said the Obama administration chose to "weaponize."

"They wanted it to be very showy. They went out of their way to make it hurt more people and to be more visible," Mulvaney said.

The government was unable to delay all visible signs of a shutdown, however. The Library of Congress in Washington had signs outside warning of closure.

And on Twitter, the National Park Service said the Statue of Liberty and Ellis Island were "Closed Due to a Lapse in Appropriations. Effective immediately and until further notice."

Yesterday, Interior Secretary Ryan Zinke greeted visitors near the Lincoln Memorial, according to his Twitter account. He said he was "happy to announce Statue of Liberty will reopen soon."

Just hours later, NPS said a funding agreement with the state of New York would ensure the statue and Ellis Island will open this morning.