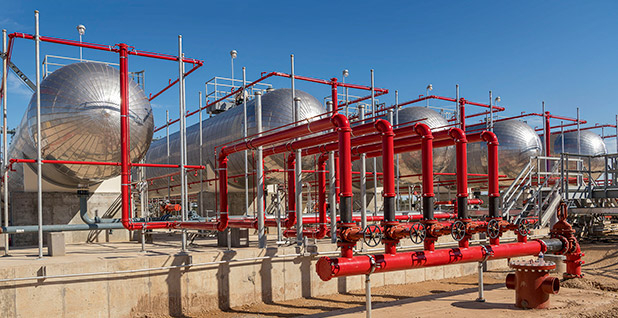 Federal regulators are considering more than a dozen proposals to build liquefied natural gas plants, and their permitting schedules could be among the casualties of the ongoing partial government shutdown.

The Federal Energy Regulatory Commission, which leads the environmental and safety reviews for LNG export plants, has not faced a funding gap since its fiscal 2019 appropriations were approved in September.

But FERC works with several other agencies in weighing the siting, engineering and environmental considerations around LNG export projects, and delays in consultations with those agencies could affect project timelines.

Agencies that commonly participate in FERC’s LNG review process and are affected by the shutdown include the Pipeline and Hazardous Materials Safety Administration, EPA, the U.S. Coast Guard, NOAA, the Federal Aviation Administration, the Fish and Wildlife Service, the National Park Service, the Bureau of Land Management, and the Forest Service.

FERC staff seeks input from coordinating agencies in the development of environmental impact statements and environmental assessments for LNG projects. Delays in obtaining opinions from furloughed staff at those agencies could push back the completion of draft and final EIS documents.

A FERC spokeswoman said she could not comment on possible schedule changes related to the shutdown.

"I can’t speculate about potential future actions of FERC staff, including whether any of the notices of environmental review schedule for upcoming LNG projects will be revised," she said. "FERC stands ready to work with our partner agencies to ensure that these reviews move forward once the government is fully operational, and we will endeavor to do what we can to work effectively with these agencies, such that we can minimize the impact of the shutdown and complete the reviews."

Among the projects with a pending environmental review is the massive Alaska LNG effort, scheduled to see a draft EIS next month; Driftwood LNG, scheduled to receive its final EIS a week from today; and Port Arthur LNG, expecting a final EIS on Jan. 31.

Fred Hutchison, president and CEO of industry advocacy group LNG Allies, said the shutdown’s effects will likely vary from project to project. "It depends on where the EIS is and how much got done before the agency had to close its doors," he said.

Hinson Peters, a spokesman for the Center for Liquefied Natural Gas, said his group is more concerned about how the ongoing shutdown could distract the administration and Congress from filling the vacancy left by former Republican Commissioner Kevin McIntyre, who died last week of brain cancer.

McIntyre was unable to fully participate at FERC for several months as he underwent medical treatment, and the White House has had some time to consider replacements, but no nominee has been announced (Energywire, Jan. 4).

McIntyre’s absence leaves the commission with a 2-2 split between Democratic and Republican members, and many observers saw the postponement of a December vote on Venture Global LNG Inc.’s proposed Calcasieu Pass project as a sign that the commission was deadlocked on whether to approve it.

Hutchison expressed optimism that the FERC nomination process would have limited impact on the pending LNG projects. "We’ve talked to the commissioners, and there’s a sense that they want to keep the LNG projects on track," he said.

But Peters said his group is concerned that the FERC vacancy is "not the highest priority" with the shutdown consuming attention in Washington. "We’re a little worried about the impact that might have," he said.