Shutdown day for Southeast pipeline? All eyes on the court 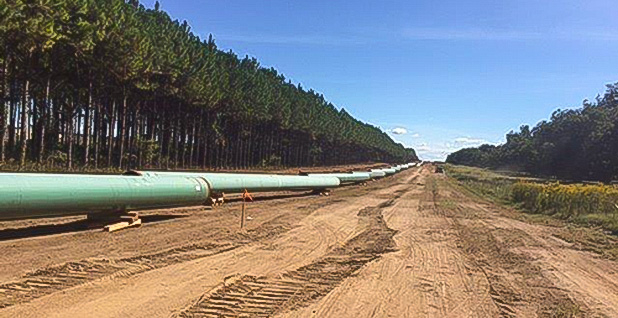 Pieces of the Sabal Trail pipeline are positioned to be buried along the right of way last year. The project may shut down today due to legal action. Sabal Trail Transmission LLC

A federal court may take unprecedented action today: shutting down a natural gas pipeline because of its climate impacts.

Developers and regulators have pleaded with the U.S. Court of Appeals for the District of Columbia Circuit to save the Sabal Trail pipeline and related projects in Alabama, Georgia and Florida.

The judges’ response so far? Crickets.

If the D.C. Circuit sticks to its normal schedule, it will issue a mandate today that will render Sabal Trail’s permits at least temporarily void. But nobody knows for sure what the court will do, and the recent requests from FERC and the developers could buy FERC time to take further action.

Today’s suspense has been building for months in a legal case that has stunned pipeline watchers and energized the environmental community.

The D.C. Circuit last August sided with the Sierra Club in a case that alleged the Federal Energy Regulatory Commission hadn’t considered certain climate impacts from Sabal Trail and the Southeast Market Pipelines Project. A panel of judges ordered the agency to do a new study.

FERC quickly set to work on the climate study but asked the court to rethink a part of its decision that, when effective, would scrap the pipeline’s certificate. The D.C. Circuit rejected that request last week, starting a seven-day clock for a mandate to issue that would finalize the decision and shut down the pipeline (Energywire, Feb. 1).

The shutdown, though it would likely be short-lived, would be unprecedented. Courts have never halted operations on a major natural gas pipeline for regulators’ failure to adequately consider climate change.

As the days have counted down, pipeline backers have pleaded with FERC to find a way around it by completing the court-ordered climate review and reauthorizing the project.

FERC did part of that this week, issuing a final study that looks at the downstream greenhouse gas emissions from Sabal Trail — the climate impact of actually burning the natural gas transported by the project (Energywire, Feb. 6).

But FERC signaled yesterday that it is not prepared to issue a final order reauthorizing the pipeline’s certificates based on the climate review. In a filing to the D.C. Circuit, it asked for a 45-day reprieve from the looming mandate in order to finish its work.

"The Commission therefore requests that the mandate be stayed for this short period," agency lawyers told the court yesterday. "If it is not, the Court’s vacatur order would create a lapse in Commission-issued certificate authority and effectively cease the operation of needed natural gas pipelines, potentially endangering the supply of electricity to Florida residents."

FERC said it was committed to releasing a final order within 45 days.

Project backers Spectra Energy Partners LP, NextEra Energy Inc. and Duke Energy Corp. made their own last-ditch filing last night, asking for a 90-day stay of the mandate. The companies echoed FERC’s concerns about service interruptions and noted that the agency has already substantially addressed the court’s August 2017 concerns.

"FERC has now issued a detailed final supplemental environmental impact statement, in compliance with this Court’s decision," the companies wrote. "FERC now merely requires a reasonable period of time to decide whether to reaffirm the Project’s authorization in light of its supplemental analysis."

The developers have put forth one alternative option for avoiding shutdown, asking FERC to issue temporary emergency certificates that would allow gas to keep moving through the pipeline network (Energywire, Feb. 5).

Analysts at Capital Alpha Partners LLC noted that if the D.C. Circuit issues the mandate today, FERC could respond by quickly releasing a final order to keep the pipeline in service.

"We expect this could keep service disruption to just a few days," the research firm wrote in a memo yesterday. "However, if FERC declines to waive the 30-day period, the delay will stretch into March, with a maximum of 45 days from tomorrow."

The Sierra Club and other environmental groups are expected to challenge any efforts to keep the project in service. They have also criticized the substance of FERC’s new climate review, saying it falls far short of what the court required, and are likely to take the agency back to court.

The pipeline backers, meanwhile, have their own follow-up legal plans. Industry lawyers are considering a run to the Supreme Court to challenge both the potential invalidation of the pipeline permits and the merits of the D.C. Circuit’s underlying decision requiring further climate analysis last year.