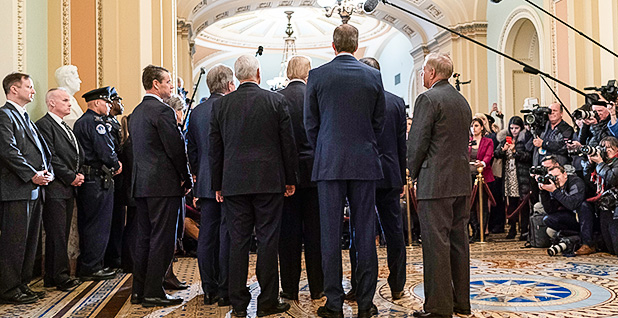 The impasse over the partial government shutdown is slowing what was expected to be an early push to clear the decks of a handful of legislative items left over from last year.

Those included reviving the expired Land and Water Conservation Fund and an assortment of expired energy tax breaks, as well as the annual appropriations process.

As the record-setting shutdown enters its second month, the standoff over President Trump’s demand for more than $5 billion for a border wall with Mexico has delayed Senate debate on a broad public lands package that would permanently authorize LWCF, which expired in September.

Sen. Mike Lee (R-Utah), who was pressing for the inclusion of exemptions from the Antiquities Act for his home state, prevented the package from passing at the end of the last Congress, despite its strong bipartisan support.

At the time, Majority Leader Mitch McConnell (R-Ky.) promised to bring it to the floor this month and overcome Lee’s objections (Greenwire, Jan. 29).

That package could still see floor time next week, but Energy and Natural Resources Chairwoman Lisa Murkowski (R-Alaska) said she had hoped to already be finished with the measure.

"Until we get on the other side of a shutdown, I can’t get any promises from Mitch other than what we had agreed to before," she told E&E News last week.

While Senate Democrats have blocked consideration of a Syria sanctions bill to try to force votes to end the shutdown, Sen. Brian Schatz (D-Hawaii) predicted the lands package would advance to passage.

House plans for tackling the lands package, which had been agreed to by House-Senate negotiators in late December, are unclear.

The top Republican on the Natural Resources Committee, Rep. Rob Bishop, said last week that it would be "wise" to wait for the Senate to pass the package. The Utah Republican said he had talked recently with Grijalva about the issue.

"We still want that thing to pass, and we’re going forward on it," said Bishop.

Also mired in shutdown uncertainty is extending a miscellaneous mix of expired tax provisions that include energy breaks.

"We’ve got a lot of members on both sides of the aisle who are very knowledgeable about this," Wyden told E&E News last week when asked about extenders. "There’s a real opportunity here. I hope we can quickly get the government open and move on."

Grassley this month also signaled he’ll entertain the inclusion of the electric vehicle tax credit in extender talks if it helps broker a deal — as has been suggested for months.

"How I feel about it personally is it benefits very wealthy people," Grassley told E&E News of the EV credits, which would be tweaked under a handful of bills that aim to extend its applicability once automakers hit the current 200,000-per-manufacturer cap.

However, if it were lumped in with a broader tax package "and it was necessary to get that package passed, I would support it," he added.

During a recent meeting on fuel economy standards, Sen. Tom Carper (D-Del.) said automakers also pressed for the EV credit and breaks for charging stations, which are among the extenders awaiting action (Greenwire, Jan. 16).

"If they’re going to be building electrified vehicles, they have to be charged," the Environment and Public Works ranking member said last week.

The shutdown has also slowed the finalization of House committee rosters, which in turn has pushed back oversight hearings, a key priority for Democrats.

"This thing has slowed everything down, including the finalization of membership," Grijalva said last week. "Without fully having the configuration of the committee and the formalities that need to go, then we can’t exercise the full options that we have in terms of getting the information that we need. It’s a weird limbo to be in. You’re the majority, but you’re waiting."

The Minnesota Democrat said she wants to bring acting Interior Secretary David Bernhardt up to Capitol Hill to come before her panel but doesn’t have a time frame for it yet.

"We still have organizational things to go through, but the shutdown is even slowing us down from doing that," she said last week after a Democratic-led forum with witnesses testifying about shutdown impacts on indigenous communities, parks and public lands (E&E Daily, Jan. 16).

The shutdown has also slowed the push to wrap up current-year appropriations and move on to the next fiscal year, Senate Appropriations Chairman Richard Shelby (R-Ala.) acknowledged.

"We thought we’d start early, but we’ve got to finish this before we really get into next year," he told reporters last week. "I don’t think it’s done irreparable damage yet, but it could if it drags on."

Appropriators widely expect the president’s fiscal 2020 budget request to be late, especially when much of the Office of Management and Budget is on furlough.

Freshman Rep. Ben McAdams (D-Utah) said there’s "a lot of frustration on both sides of the aisle" related to the shutdown and its widespread effect on other legislative priorities.

McAdams, a moderate Democrat who did not vote for House Speaker Nancy Pelosi (D-Calif.) in the leadership election, nevertheless offered praise last week for Pelosi’s handling of the impasse.

"It’s a tough situation. I think she’s done a good job of keeping the conference together," McAdams said of Pelosi. "I’m ready to move forward, but you know, it’s hard to negotiate in a hostage situation."

McAdams added that he believes the two sides ultimately can find common ground on border security and immigration reform, but "you can’t really do that in the context of a shutdown. I think you need to reopen the government, and then have a serious negotiation."

House Transportation and Infrastructure Chairman Peter DeFazio (D-Ore.) said last week that he wasn’t yet worried that the shutdown would hinder plans to move an infrastructure package within the first six months of the year, noting that he’s been consumed with organizing the committee anyway.

"It’s not a helpful beginning, but I’m not concerned about the timetable at this point," DeFazio said.