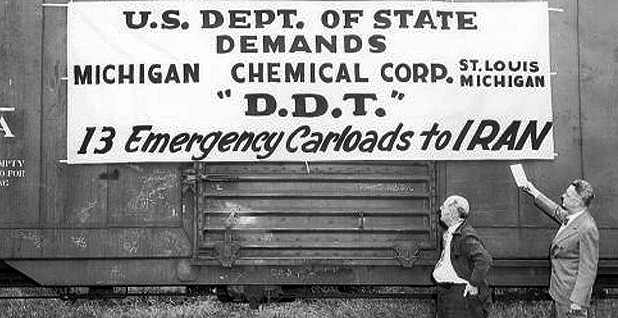 During World War II, Velsicol — then Michigan Chemical Corp. — was a prime supplier of DDT to the U.S. military. This railroad car funneled containers of the chemical out of St. Louis, Mich. Photo courtesy of the Pine River Superfund Citizen Task Force.

This story was updated on Feb. 10.

For years, when spring rolled around in St. Louis, Mich., songbirds dropped to the ground, dead.

Locals often found them lying facedown in their yards. On occasion, they watched the birds — mostly robins — convulse and shudder until their hearts stopped beating. Sometimes cats dragged the bodies away before anyone noticed.

In 2012, residents collected 94 bird corpses and took them to a lab for testing.

"They all had died of DDT poisoning," recalled Jane Keon, a local advocate and author of the book "Tombstone Town."

The robins harbored some of the highest amounts of DDT (dichlorodiphenyltrichloroethane) ever recorded in birds. For locals, the opening scene of Rachel Carson’s 1962 classic "Silent Spring" — in which the writer portrays an American town so stricken with toxins that birds "trembled violently and could not fly" — had come to life.

Though U.S. EPA banned DDT in 1972, the chemical still taints St. Louis — and its residents.

For decades, the small Michigan town was a hub for DDT manufacturing. The former Velsicol Chemical Corp. factory remains one of the country’s most polluted facilities, with two Superfund sites spanning its property.

In October 2016, U.S. EPA completed a lawn aeration program, which involved digging up dozens of yards to remove the DDT that had passed into earthworms, and then robins. Federal regulators first assumed factory smoke had dusted the town in DDT, but locals pointed to the Pine River, which ambles by the old factory site on its way through St. Louis.

Velsicol had used the river as its waste pipe, said Gary Smith, treasurer of the Pine River Superfund Citizen Task Force, a local organization advocating for cleanup. The waste was so thick the company routinely dredged the river.

Effluent "literally choked the river off," he said. "The sediment would be piled up; they had to get rid of it somewhere. They would truck it away, or move it and fill in some of the low spots [around town]."

Any family in want of extra soil could call up the company.

"For a case of beer," Smith said, "they’d drop a truckload of dirt in your yard."

Even after the lawn removal, St. Louis’ problems haven’t gone away.

"We’re still finding some birds, and there’s DDT in their brains," Smith said.

When Smith — now 65 — was a child, his parents ran a restaurant not far from the factory gates.

Smoke "would cover the town," Smith recounted. "It tasted of salt. There was this nasty stink. Sometimes you could even light [the river] on fire."

The factory had opened in 1936 as Michigan Chemical Corp., manufacturing salt-based compounds before moving onto petroleum-derived products — such as the toxic pesticide methyl bromide — in the 1940s. By 1944, it was shipping truckloads of DDT to the U.S. military for use as an insecticide in World War II. Soldiers would douse themselves in the agent to get rid of lice and control mosquitoes.

The company’s own advertising called DDT "the miracle insecticide."

By the time Velsicol Chemical, based near Chicago, bought out Michigan Chemical in 1963, it had been promising clients "uninterrupted deliveries" of 100,000 pounds of various chemicals for years.

Today, grasses sprout over the old pipes and tubing of the factory, which was demolished and buried in the early 1980s after Velsicol shut down the plant in 1978. But contamination often lurks unseen: On an active golf course beside the main 52-acre site sits Velsicol’s burn pit site.

"Back then … any excess chemical that they didn’t want went over to this property, [was] dumped in the pit and burned," said Jim Hall, president of the Pine River community group.

The 5-acre burn site is part of the course’s out-of-bounds area.

"Elevated levels of benzene and 1,2-dichloroethane have been found in the soils and in the underlying groundwater beneath the site," reads an EPA document.

The company’s chemical bonfires long since dispersed toxins on the wind, and EPA claims the burn pit is not a current risk to human health. But the main Velsicol site is a different story.

The federal agency lists human exposure at the main site as "not under control."

The status of contaminated groundwater: "Not under control."

"[R]esidents are likely in contact with soils contaminated with polybrominated biphenyls," or PBBs, EPA said in an online notice.

St. Louis residents are used to near-constant health warnings. Their town was the epicenter of a 1970s agricultural disaster that revolved around Velsicol’s PBBs, a flame retardant.

In 1973, the company mislabeled its fire retardant as a livestock feed additive, and farmers across Michigan doled it out to their animals. The next year, cows began falling ill in droves. Chicks hatched with deformed legs. When worried farmers petitioned officials, it came to light that thousands of people — mostly farm families — had already consumed PBB-laced eggs, dairy and meat. The state swiftly quarantined over 500 farms and ordered the slaughter of hundreds of thousands of animals.

But for the population of St. Louis, the damage was done. A state report from 1975 found toxins everywhere.

"PBB’s [sic] were measured in the plant effluent, river water, fish and duck tissue, and sediments of the Pine River," the study reported. "Concentrations in local fish populations were sufficiently high that a health warning against consumption has been issued."

"Although fish consumption advisories are in place … and warning signs are posted," a current EPA notice reads, "fishing has been observed in the river, and we believe the fish are being consumed."

Too young to die

Disease is rampant in and around St. Louis, though Velsicol has long since closed. Young girls hit puberty prematurely, and incidences of breast cancer are elevated, charges Keon. She cited kidney problems, liver cancer, brain tumors and miscarriages "like crazy."

Emory University researchers are studying the incidences of disease in St. Louis, and their data are augmented by dozens of families’ stories.

When they moved into town from the countryside in 1968, Hall’s family settled three blocks from the Velsicol factory.

But when the 1970s recession hit, his father struggled to find work.

After Hall went away to college in the 1980s, his brother was diagnosed with cancer. He would eventually succumb to the disease in 1985.

"That rocked me a little bit," Hall said. "’Cause you don’t know why they have all this cancer in this area."

As the years went on, Hall’s concerns deepened. Multiple members of his family had thyroids removed. Then, when doctors tested PBB levels in Hall’s blood, his were 20 times higher than the Michigan farm family average.

"My assumption is that I inhaled a lot," he said. "You’re mowing lawns, and the dust is coming up and you don’t think much of it."

Then, when Hall’s daughter Jerra was born, she was diagnosed with a rare heart condition.

"There’s research that shows [contamination] can go from me to my kid to my grandkid and on, even though they were never exposed," Hall said.

Velsicol itself has always been tight-lipped or even adversarial about the hazards posed by its products. In 1962, it had threatened to sue Rachel Carson’s publisher, Houghton Mifflin Co., over what it called "inaccurate and disparaging" claims aired by "Silent Spring."

The company operates today as Velsicol Chemical LLC, having undergone several buyouts and a bankruptcy, and maintains factories in Memphis, Tenn., and Wuhan, China. It remains a member of the American Chemistry Council, the industry’s largest trade group.

Velsicol did not respond to repeated requests for comment for this article.

A path forward, or more delays?

To be sure, parts of St. Louis and the surrounding area have been cleaned up.

"St. Louis has a history of serious chemical contamination problems. Some of the sites where those problems existed have undergone successful remediation, such as the Pine River and the neighborhood adjacent to the former chemical manufacturing site, which includes my childhood home," said Stephen Boyd, now an environmental chemistry professor at Michigan State University who grew up just blocks away from the chemical plant. "Others remain but are inching towards being cleaned up."

But progress is slow.

EPA has already sunk tens of millions of dollars into the site. The agency’s projected costs at the plant site alone total $384 million, according to Keon.

"We butt heads with our EPA people quite a lot," said Keon.

For its part, EPA says it is proceeding cautiously. Excavating highly contaminated soils could risk releasing dibromochloropropane, or DBCP, a long-buried fumigant once produced by Velsicol.

So EPA has opted for thermal destruction, a process by which contractors will stick metal rods into the contaminated areas and run an electric current through the ground, neutralizing toxins.

The Velsicol site is the largest area in the world to be targeted for thermal destruction, according to Keon. But, like most environmental restoration efforts, the operation is an expensive one — and EPA has not yet secured funding.

"EPA expects to know if funding will be provided by spring 2017," an EPA spokesperson said.

Eventually, EPA says, it will cap the site to prevent the further spread of toxins.

But residents aren’t optimistic. After Velsicol shuttered the plant in 1978, it clamped clay over the site and encircled it with a slurry wall, claiming toxins would be permanently contained.

"It was more of a cover-up" than a cleanup, contends Hall.

DDT did not stay put for long. Hidden from plain site and unknown to environmental officers, contaminants migrated. By the time the leak was discovered in 1997, at least 11 million gallons of contaminated water had leaked out of the cap.

EPA was forced to dredge 670,000 cubic yards of tainted sediment in the Pine River in a move that would ultimately lower DDT concentrations in fish by more than 98 percent. State officials say the fish advisory will remain in place until a full cleanup is declared.

But with contaminants still leaking from the site, EPA has been collecting toxin-laced water and shipping it off-site as an interim measure.

"EPA continues to remove approximately 20,000 gallons per week of contaminated groundwater from the groundwater collection trench," the agency said in a newsletter released on Jan. 20.

Its second attempt at a cap may be a long time coming.

"Placing a cap over the 52 acre [sic] main plant site will be dependent upon the availability of EPA funding," said an EPA spokesperson.

The Superfund program has been mired in budget woes for years, leading many cleanups to stall (Greenwire, Jan. 21, 2008). Congress hasn’t renewed the Superfund tax — which charged the chemical and fossil fuel industries for future cleanup costs — since it expired in 1995, meaning taxpayers fund an increasingly tight federal cleanup budget.

"Basically we’re always begging for money," said Ed Lorenz, professor of history and political science at Alma College near St. Louis. "I think there’s a lot of sympathy with these other [afflicted] communities, but the bad thing is we’re sort of in competition with each other for money. And it may get scarcer" under the Trump administration.

Scott Pruitt, President Trump’s pick for EPA administrator, once sued the agency to halt a cleanup effort in the Chesapeake Bay, and Trump’s EPA transition leader had ties to a website promoting the use of DDT (Greenwire, Dec. 9, 2016).

As the Pine River Superfund Citizens Task Force commences its 20th year, its members say they aren’t holding their breath.

"Most of the time we can laugh about it and say, ‘Oh, remember when we thought we were doing a five-year commitment and then we’d be done?’" Keon said.

Many in the community have made cleanup their life’s work.

"Someone asked me, ‘Well, why do you still live there?’" Hall recounted. "Because I have two brothers, a daughter and a mom in the cemetery. I’ll be in there, too. And I want my kids and grandkids to live in a much cleaner environment. Why should I run?