Sinkhole threatens N.M. town, but who should pay to fix it? 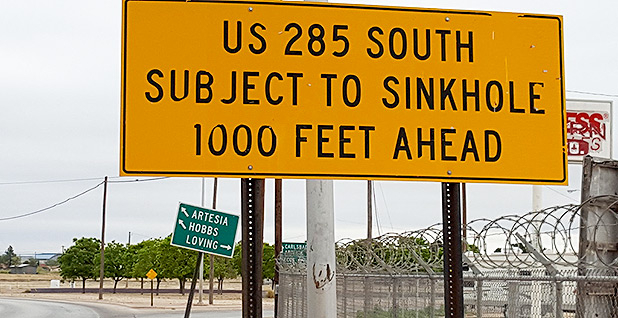 A warning sign on the outskirts of Carlsbad, N.M. Photo by Mike Lee.

CARLSBAD, N.M. — Sometime soon — maybe in four years, maybe in 24 years, maybe in a few days — it’s very likely that an underground cavern at the edge of this small town will collapse.

If it does, it could create a sinkhole big enough to hold the New Mexico Capitol building, and the hole could swallow a highway intersection, an irrigation canal, a feed store and part of a mobile home community. Damage could range as high as $1 billion.

New Mexico oil regulators discovered the cavern, created by an oil field service company’s brine well, in 2008. The state Legislature passed a law in 2010 that was supposed to fund a solution. But the state diverted the funds for other uses.

The Oil Conservation Division (OCD) at the New Mexico Department of Energy, Minerals and Natural Resources has spent $5.3 million studying and monitoring the cavern but hasn’t started any repair work. The Legislature established an independent board in March to oversee the cleanup, but lawmakers still haven’t come up with the estimated $15 million to $25 million needed to fill in the cavern.

And officials from the state, city and county are at odds over how to come up with a much smaller amount — about $500,000 — needed to pay for engineering work. The state Legislature asked the Carlsbad City Council and the Eddy County commissioners to kick in half the cost. The city and county want the state to pay for the cleanup.

"Nobody wants to take fiscal responsibility for this because they don’t know how much it’s going to cost," said Wally Menuey, who manages the Circle S Feed Store next door to the abandoned brine well site.

The store has been in Menuey’s family for 40 years, and it’s been at the site on U.S. 285 on the outskirts of Carlsbad since 1985. A cave-in at the brine well would likely consume part of the store’s parking lot, and the resulting cracks and ground subsidence would wreck the building.

As a result, Menuey and other local businesses are stuck. They can’t leave, since it would be virtually impossible to find a buyer, and they can’t expand because of the risk from the brine well. The Carlsbad City Council recently passed a moratorium on new development near the brine well.

"We need to build another warehouse," Menuey asked.

Menuey and others in Carlsbad say the cavern would’ve been fixed years ago if it weren’t in New Mexico’s remote southeastern corner. Environmentalists and some lawmakers point to the Carlsbad brine well as the end result of New Mexico’s laissez-faire attitude toward oil and gas regulation, and it’s been exacerbated by severe budget cuts under Gov. Susana Martinez.

"The state just doesn’t have money to do anything, really," said Mary Feldblum, with the Oil and Gas Accountability Project. "Something like this is a big flag about how serious it is when you underfund your regulators, and the rules need to be fixed."

It can happen here

Everyone involved, including the OCD, acknowledges that the danger is real, because there have been two other sinkholes created by similar oil field brine wells.

The cavern was formed by a solution-mining operation that produced brine for use in the oil field. New Mexico has about 30 similar brine wells, which typically operate by injecting water into a salt formation and extracting a solution loaded with salt.

The process naturally creates an underground cavern, but they usually aren’t dangerous. In eastern New Mexico, though, a handful of brine wells were drilled into a relatively shallow layer of salt — 400 to 500 feet below the surface.

Two similar caverns collapsed and created sinkholes in 2008. No one was hurt — the wells were in remote areas — but the OCD inspected other brine operations in the state to see whether they were in danger of causing a cave-in.

Inspectors quickly discovered a problem at the brine well in Carlsbad run by I&W Trucking Inc. The well was drilled in the 1970s and acquired by I&W in 1995. Over the years, it produced between 5 million and 7 million barrels of brine.

Tests showed the brine operation had left an oblong cavern, roughly 350 by 700 feet and 100 feet deep, and it could hardly have been in a worse spot. It’s underneath the "Y" formed by the intersection of two main highways, which lead from Carlsbad to the nearby oil fields, potash mines and Carlsbad Caverns National Park. The irrigation canal that parallels the highway provides water for 25,000 acres of farmland in southern Eddy County.

After the problem was discovered, city officials paid for a fence around the 3.3-acre property and some initial testing, but mostly waited on the OCD.

The city and the Menuey family sued I&W for damages, and the OCD opened an enforcement case against the company.

I&W’s owners filed for bankruptcy and largely avoided financial responsibility for the brine well problem, city and state officials said. The company’s owners have opened a similar business outside of Carlsbad.

Fix is found, but not the funds

“Nobody wants to take fiscal responsibility for this because they don’t know how much it’s going to cost.”

The consensus among both the OCD and local leaders in Carlsbad — some of whom work in the mining business or for the Department of Energy laboratories in the area — is that the best solution is filling the cavern with something solid. Maybe a slurry or grout that would spread out and fill the cavern, then turn solid enough to support the roof. A 2014 report by the engineering firm AMEC made a similar recommendation.

It’s been done in other solution-mining operations in Canada, although those cases weren’t as close to the surface and didn’t pose a cave-in risk, said Don Purvis, a retired mining executive who lives in Carlsbad and advised the city about the I&W site.

"Every situation is different, but the basic technology is there," he said.

Almost from the beginning, though, the biggest obstacle has been money — the AMEC report estimated the cost of filling at about $25 million.

New Mexico is one of the poorest states in the country, and its budget was rocked by both the financial crisis of 2008 and the downturn in oil prices that happened the same year.

"That’s the biggest nontechnical issue I have, is the funding," said Jim Griswold, environmental chief for the OCD.

John Heaton, who represented Carlsbad in the state House of Representatives, came up with a solution in 2010. New Mexico already dedicates a small tax to a fund for reclaiming and cleaning up abandoned oil wells.

Heaton sponsored a bill that allowed, but didn’t require, the OCD to spend some of the reclamation fund on facilities associated with oil production, like the Carlsbad brine well. And it increased the tax from 0.19 percent to 0.24 percent — 24 cents per $100 — during years when the price of oil rose above $70 a barrel.

Even with the temporary increase, New Mexico’s reclamation tax was less than half what Texas imposes. Still, it worked better than expected. In 2010, the year Heaton’s bill passed, a four-year oil boom was getting underway. The price of crude roared past $70 in January of 2010 and exceeded the threshold every month until December 2014.

Heaton, who left the Legislature in 2010, said the new revenue could have had a significant impact on the Carlsbad brine well, but that didn’t happen.

"Rather than going for the purpose for which it was intended, it was obviously squandered somewhere else," he said in an interview. "I don’t know where or how or why, but it was."

Data from the OCD show that state regulators did spend part of the increased funding on the Carlsbad site, including $2.5 million in 2014. But for the last two calendar years, the department has mostly spent the money on salaries and other expenses, even as spending from the fund increased.

The latest legislative fix is a newly formed board, the Carlsbad Brine Well Remediation Authority. The eight-member board is made up of state and local officials, and part of its job is to seek funds from outside sources.

"We made a very strong case to the Legislature, we need to get on this problem before that thing becomes a sinkhole," said state Rep. Cathrynn Brown, a Republican from Carlsbad who sponsored the bill creating the board.

The law puts Carlsbad Mayor Dale Janway in charge of the brine well authority. Janway minces no words about where he thinks the funding should come from.

"My belief is, it’s the state’s responsibility," he said.

Janway and other local officials have pressed New Mexico’s congressional delegation about the possibility of federal funds. And, he said, it’s possible the town could borrow money through a bond issue to pay for some of the work, although the City Council opposes the idea.

Getting funding from the state Legislature looks to be difficult for the immediate future, given the state’s dire financial condition and the governor’s opposition to new taxes. Martinez vetoed the Democratically controlled Legislature’s budget — which included money for the engineering work on the brine well — because it would’ve raised taxes.

It’s unclear whether the Legislature will consider more money for the Carlsbad site when it meets for a special session, and a spokesman for Martinez didn’t return phone calls and emails seeking comment.

Preparing for the worst

Janway and a lot of others in Carlsbad say the state government is being shortsighted. If the brine well collapses into a sinkhole, the highway damage alone would be three times the cost of filling the cavern, according to a report by the National Cave & Karst Research Institute, which is based in Carlsbad.

On top of the property damage, a cave-in could force brine into a shallow aquifer that sits above the salt formation, potentially contaminating the water supply for farmers and residents who rely on private wells, according to Griswold at the OCD.

For the time being, the cavern is stable because it’s filled with brine. But both state and local officials believe it’s only a matter of time before the roof collapses. The OCD installed seismographs around the site, which occasionally detect the noise made as sections of rock break off inside the cavern.

Aboveground, people in Carlsbad have learned to live with the brine well. The highways that pass the site are marked with yellow warning signs that read "subject to sinkhole." At the nearby El Dorado Estates RV Park, new residents get a letter from the manager explaining the evacuation procedures in case of a collapse.

The Carlsbad Fire Department periodically holds drills with other emergency agencies to determine where to block the roads and how to evacuate homes if the worst happens. The town already has a reverse 911 system that can notify people of emergencies, and it’s working on getting a system that can send text alerts. Fire Chief Richard Lopez believes his department could start clearing the area within 30 minutes.

Because Carlsbad is so isolated, firefighters train year-round for all kinds of emergencies, Lopez said — search and rescue in the nearby national forests, swift-water rescue, diving. If the brine well collapses, the department can call for help from surrounding departments and would likely get assistance from all over the state, but it’ll be on its own for the crucial first minutes.

"We try to prepare for everything because we don’t get help from anywhere else," Lopez said.