Skeptical scientists are lukewarm on Trump 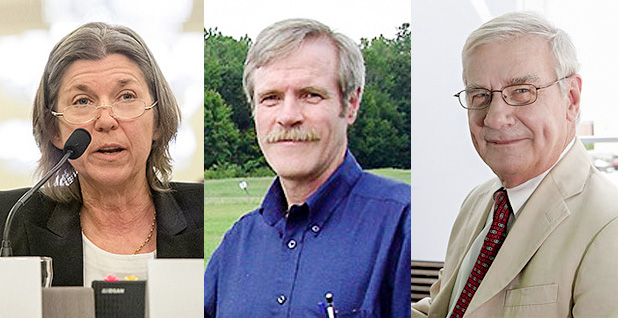 Scientists who are skeptical about the impacts of climate change include, from left, Judith Curry, John Christy and Pat Michaels. Ken Cendeno/Greenpeace(Curry); Christy/Special to E&E News; @CatoMichaels/Twitter (Michaels)

Scientists who have been combating the prevailing views about climate change for years might find plenty to be giddy about with the new administration.

President Trump hired vocal climate skeptics to help shape his administration; top government officials are publicly questioning the role humans play in global warming and whether regulations are worth the costs; and the boss of U.S. EPA is eager to crack open the scientific debate that many called settled.

So it wouldn’t be surprising if the scientists who diverge from mainstream views and have been marginalized in the debate were feeling vindicated these days.

Michael Mann, a climatologist at Pennsylvania State University who regularly spars with dissenters, said: "They would be happy, wouldn’t they?"

Pat Michaels, a senior fellow in environmental studies at the Cato Institute, hasn’t yet been sold on where the new team stands. "I would view the administration’s attitude on climate change or global warming, which it more specifically should be called, as kind of ignoring it."

Others feel a sense of uncertainty.

"I’m not feeling good yet," said Judith Curry, a climatologist and former professor at the Georgia Tech.

She and some other prominent scientists who have been publicly critical of the dominant theories of climate science say they see promising signs in the Trump administration’s early moves. But some question whether it’s something the administration will take on in earnest, and they warn that government officials risk veering from skepticism into outright denialism.

Roger Pielke Jr., a professor in the Environmental Studies Program at the University of Colorado, Boulder, believes humans are contributing to climate change and has had his work included in the research of the Intergovernmental Panel on Climate Change.

Pielke, who has advocated for a carbon tax to limit greenhouse gas emissions but questioned the links between those emissions and extreme weather events, said in testimony to Congress earlier this year that he had experienced an "organized effort of delegitimization" by congressional Democrats and the Obama administration.

He’s not happy with the Trump administration, either.

"There is nothing to celebrate about the Trump administration’s approach to energy or climate, unless you are an ideologue on either side," Pielke said. "In that case, it’s happy times for renewed political combat."

He told E&E News in an email, "I have had no interactions with anyone related to the Trump Administration (and generally find their policies, climate and otherwise, to be awful)."

‘Hard to figure out what’s going on’

Some scientists are waiting to see how the administration handles hot-button issues like EPA’s endangerment finding and whether officials follow through on assembling a so-called red team aimed at poking holes in the climate science consensus.

"I’m cautiously optimistic," Curry said. "I don’t have a problem with what he has said" since becoming president, she added. "He basically says the causes of climate change are uncertain. And he isn’t letting climate change drive energy policy."

Michaels of Cato said he’s "cautiously hoping" that the administration will adopt a "nuanced point of view on climate."

That would sound something like this: "Climate change is real," Michaels said, but "it doesn’t look like it’s going to be the end of the world, and there’s not much you can do about it anyway." He called that approach a "lukewarm" point of view.

That view is a departure from the Obama administration, Michaels said. "If they do that, they won’t be labeled deniers, and there is a growing body of scientific literature and a growing data stream that argues that that is a reasonably credible point of view," he said.

Trump himself rarely talks about climate change, and in the wake of his decision to extract the United States from the Paris climate accord, his aides refused to say where Trump stood in regard to the science. He stated politics, not science, as his primary reason for the withdrawal, calling it a bad deal for the United States.

John Christy, a climate scientist at the University of Alabama in Huntsville who has long argued that the science isn’t settled and climate change models show exaggerated warming, said it is "satisfying" to see his work "now being taken seriously by the folks who can do something about the legislative side."

But Christy is also unsure what exactly Trump and his team think about climate data.

"I don’t know where President Trump lands regarding where the ‘science’ is," he said. "It’s hard to figure out what’s going on" with the administration, Christy added. "I can’t get my hands around what direction it’s going because the noise level is so high."

Richard Lindzen, an emeritus professor of meteorology at the Massachusetts Institute of Technology and a fellow at Cato, said there’s "a feeling that especially with pulling out of Paris that there is more sanity" when it comes to climate science.

"I do think that the present administration has people who understand that this is a scientific issue that is by no means settled. That’s a big plus," Lindzen said.

Those wishing for a major shake-up in climate science are watching closely.

Michaels earlier this month published a "climate roadmap" for Trump in which he urged Trump to obliterate the 2009 endangerment finding, the determination that set the stage for federal rules to limit greenhouse gas emissions. Michaels also wants Trump’s team to pull out of a 1992 U.N. treaty that enables the country to enter into international emissions agreements.

If EPA doesn’t change its official position regarding the science, Michaels said, "all that’s being done is just waiting for the next president of the other party to reverse it."

Others in both the science and advocacy realms also want the new administration to torpedo the endangerment finding, but it’s unclear whether EPA Administrator Scott Pruitt will take that on. Pruitt and other members of the administration have suggested kicking off a formal debate to test the prevailing climate science.

That review would be welcome for some skeptical scientists, although several cautioned that it has to be done carefully.

"I’m hopeful that something can shake loose and that we can start to have a rational dialogue on this subject," Curry said. She called for "taking a new look at the science" and "opening up the policy options." But, she added, "promoting policies to senselessly trash the environment isn’t going to help either. I’m just not clear where this administration is going yet."

Michaels said the red team approach "has promise, but is also fraught with peril."

He said he hopes that the red team will "be the team of nuance and innovative policy, rather than the ‘there’s no such thing’ [as climate change] team."

Michaels added that under Trump, "I think there is a real opportunity with regard to developing science, and I don’t detect any willingness to wade into those waters."

Clarification: This story has been updated to clarify the views of Roger Pielke Jr.