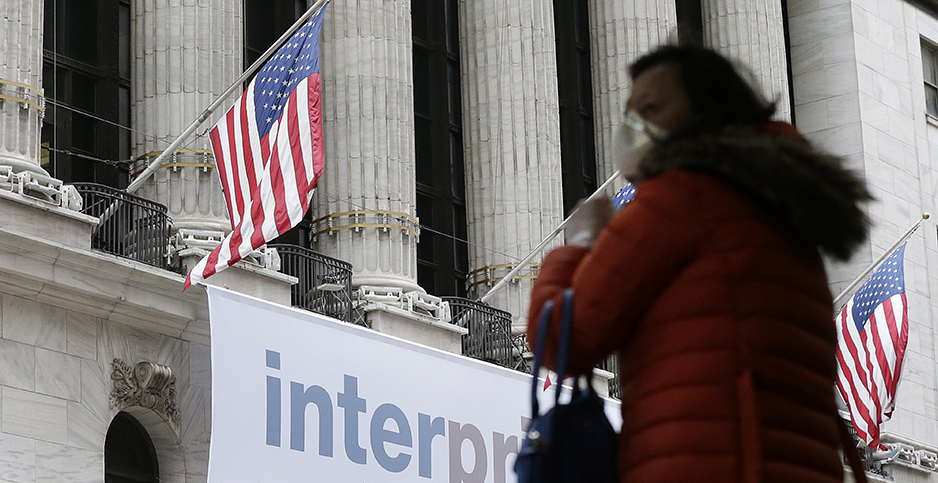 A woman outside the New York Stock Exchange wearing a mask. The coronavirus pandemic has sent shock waves through the economy. John Angelillo/UPI/Newscom

An Obama-era phantom has returned to haunt climate hawks: Will voters care about the environment during a recession?

Pollsters are beginning to field surveys to learn how the novel coronavirus pandemic — and the spiking unemployment rates that come from a worldwide lockdown — are affecting climate politics. A worst-case scenario for greens might be a return to public sentiment circa 2008 to 2014, when climate skepticism surged among voters.

This time might be different, social scientists say. In the past decade, climate change has become easier to recognize in everyday life. Republican leaders have fractured on the science and their messaging, while greens have gotten more savvy about downplaying the economic costs of climate action.

And a pandemic that threatens to kill hundreds of thousands of Americans could leave a traumatized electorate more willing to heed warnings from scientists.

Still, some experts say it is hard to ignore the bad track record of climate politics during economic downturns.

"History shows that the environment, for better or worse, tends to be what we call a fair-weather friend," said Lyle Scruggs, a University of Connecticut professor who has researched shifts in climate opinions.

Belief in climate change plummeted as the Great Recession took hold of the U.S. economy. In 2008, Gallup found that most Americans had stopped valuing environmental protections more than economic growth. For the first time in the poll’s quarter-century history, people said the economy was more important.

By 2010, the same annual tracking poll found nearly half of Americans thought global warming had been exaggerated — a 15-point surge from 2007. That sentiment didn’t return to the levels before the recession until 2016.

What caused those shifts is still up for debate. One explanation is straightforward: As people lose money, they tend to focus more on their immediate needs. They have less financial or psychological bandwidth to care about climate change, especially if people think they’re paying today for benefits that might not come for years or decades.

But some research points to a contrary view: Political leaders swayed climate attitudes much more than the economic situation did.

State and local unemployment rates, falling home prices, and self-reported recession impacts did not significantly dampen individuals’ climate attitudes, according to a study analyzing two in-depth tracking surveys that polled the same 1,000 people in 2008 and 2011.

Instead, people’s declining appetite for climate policy was linked to their members of Congress casting anti-environment votes, according to the 2017 study published in the journal Environmental Politics.

That fits a growing body of research that finds people depend on political cues to make sense of the world, said Matto Mildenberger, one of the study’s authors. He compared it to the way Republicans’ opinion of the economy improved when President Trump took office, even as little actually changed.

That same dynamic was in full force around the Great Recession, he said.

Between 2008 and 2009, Republicans went from backing presidential nominee John McCain’s climate policies to denouncing "Climategate" as evidence of a scientific hoax. Former House Speaker Newt Gingrich (R-Ga.) all but apologized for filming a climate ad with Rep. Nancy Pelosi (D-Calif.). And conservative media broadcast a unified message: Global warming is a Democratic plot to seize power.

"There was a lot of signaling that the Republican position on climate was one of increasing skepticism," Mildenberger said.

One apparent believer in political cues overshadowing economic conditions was the king of talk radio himself, Rush Limbaugh.

On a 2010 show, he ridiculed a study that suggested the recession was sapping support for climate policy.

"I don’t think unemployment has nothing to do with it. It has to do with the fact that we have now learned that man-made global warming is a hoax that has been perpetrated by a bunch of leftists," he said.

Instead, climate attitudes will likely stay steady even as voters shift attention to the economy, said Anthony Leiserowitz, who co-authored the study with Mildenberger.

But the Great Recession isn’t a perfect parallel.

"This is a radically different situation than 2008-2009, so as they like to say in investing: Past returns are no guarantee of future performance," Leiserowitz, director of the Yale Program on Climate Change Communication, said in an email.

Matthew Kahn, the Johns Hopkins University professor whose study was mocked by Limbaugh, said the short-term effect of a recession could be lower support for costly climate policies. But looking out further, he said, the pandemic offers a model for skeptical voters that distant-seeming threats can still hurt them.

That means Republicans might have more success stressing the costs of climate policy, but it doesn’t mean voters have lost faith in climate science.

"It’s not that a recession causes people to become climate deniers. It’s that they get distracted from long-term issues," Kahn said.

That distraction might be diminished this time, he added, because of its origins.

"Coming out of the pandemic, middle-class voters may be more aware of scary scenarios that we may never have experienced," he said.

"The coronavirus is having two effects. In the short run, it’s making us focus on the pocketbook," Kahn said. "But it’s also stretching out our imagination about ugly scenarios that could occur — and that makes having implicit insurance, i.e. lower greenhouse gas emissions, more attractive."

Greens are better positioned to take advantage of that dynamic than they were during the Great Recession, said Mildenberger, a professor at the University of California, Santa Barbara.

When Congress tried to pass the Waxman-Markey cap-and-trade bill, opponents focused on how it would raise energy prices. Now, Mildenberger said, the Green New Deal’s emphasis on economic stimulus instead of carbon pricing makes it easier to pitch during a recession.

The Republican messaging is also different. Trump has softened his climate rhetoric since he ran in 2016, even as his administration continues to promote fossil fuels. Oil companies are pledging to cut emissions, though many greens accuse them of misdirection. And the top House Republican, Minority Leader Kevin McCarthy of California, has pushed his caucus to back some modest climate policies, like planting trees.

It will take time for these trends to appear in public polling, the experts said. People are still in crisis mode. But if voters think the U.S. botched its pandemic response, that could reverberate in climate politics.

"I think at the end of this, the U.S. system is not going to come out looking great. And partly that’s because the government will have listened to the same anti-science voices at a critical moment of time," Mildenberger said.