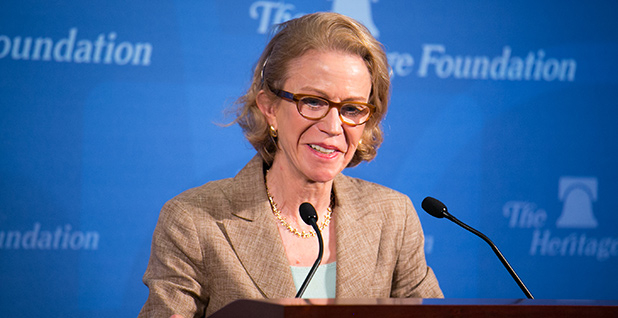 Under President Trump, the left has lost some big climate battles: The president promised to exit the Paris climate treaty, the Clean Power Plan is doomed and critics of mainstream climate science hold top jobs.

But Democrats and green groups now claim a major victory against the administration — the withdrawal of one of Trump’s most controversial nominees, due in large part to her views on climate change.

The White House confirmed over the weekend that Kathleen Hartnett White has withdrawn her name from consideration to lead the White House Council on Environmental Quality. Trump first nominated the former Texas environmental regulator — an ally of Energy Secretary Rick Perry — in October, but she ran into staunch opposition by Senate Democrats who opposed her record, including her vocal criticism of mainstream climate science.

The collapse of the nomination dealt a blow to conservatives who question the science behind rising temperatures. They had hoped to expand their ranks within the Trump administration. Their foes, meanwhile, celebrated the withdrawal as a win for the lawmakers and groups that fought to keep Hartnett White out of the White House, although they cautioned that they aren’t expecting any major policy shifts from this administration.

"This is certainly a victory for climate science, for good government and for the environment overall," said Christy Goldfuss, who led CEQ during the Obama administration. "I think her views were so extreme, so beyond the pale of what any person could believe with regard to science, with regard to climate impacts, that she was not able to withstand the light and she withdrew because she was too extreme and unqualified."

The collapse of the nomination comes after Hartnett White appears to have been unable to muster enough support on Capitol Hill to win the approval of the Senate’s slim Republican majority. It’s unclear how much political capital the White House was willing to expend on her behalf.

Michael Mann, a climatologist at Pennsylvania State University, called the withdrawal a "minor victory for the side of science and reason in the ongoing war being waged against the scientific community by the Trump administration and congressional Republicans."

But he and others aren’t expecting the administration to do an about-face on climate science because one nomination tanked.

"Perhaps they just recognized what a weak and unsupportable nominee she is and didn’t think it was worth any political capital to fight for her," Mann said.

During her Senate confirmation hearings, lawmakers grilled Hartnett White on some of her inflammatory climate statements and writings. She stood by her stance — diverging from mainstream climate science — that carbon dioxide is a "harmless and completely natural gas" (Climatewire, Nov. 9, 2017).

"It’s likely that CO2 emissions from human activity has some influence on the climate," she said. "CO2 in the atmosphere has none of the characteristics of a pollutant that contaminates and fouls and has a direct impact on human health as an atmospheric gas."

Scott Segal, an industry attorney at Bracewell LLP, said, "I think the White confirmation difficulty was about more than just climate science." He added, "The debate over climate" is now "more about policy development rather than science," noting that EPA is moving to replace the Clean Power Plan and doesn’t appear poised to unravel the scientific endangerment finding that underpins federal climate rules.

Some critics of mainstream climate science, meanwhile, are disappointed that Hartnett White won’t get a top White House job.

"We’ve lost a very important voice in the debate between climate alarmism and energy realism," said Myron Ebell, director of the Center for Energy and Environment at the Competitive Enterprise Institute.

"It’s one thing to have someone in place who’s a climate skeptic," Ebell said. But Hartnett White would have been "a climate skeptic who is very expert on these issues and can punch back."

John Holdren, who was President Obama’s science adviser, said the significance of Hartnett White’s withdrawal will become clearer when someone else is nominated in her place.

"He/she would need to be a science-respecting intellectual and political powerhouse with Trump’s ear to begin to reverse the damage that has already been done through the actions and influence of the likes of [OMB chief Mick] Mulvaney, Pruitt, [Interior Secretary Ryan] Zinke and Perry," Holdren said. "Seems an unlikely scenario, alas."

Reached by phone yesterday, Hartnett White declined to comment about her nomination.

In a statement issued by the White House, she said, "In the best interest of facilitating confirmation of the President’s nominees throughout his administration, as well the needs of my family and work, I feel it is best, at this point in time, to withdraw my name from further consideration."

She said she would continue to champion Trump’s "policies and leadership on environmental and energy issues of critical importance to making our nation great, prosperous and secure again."

It’s unclear whether there will be another nominee for CEQ or whether Democrats would mount a similar opposition campaign as they hope for electoral gains in 2018.

"If the Republicans lose the Senate, they’re not going to get anybody in, so let’s hope that they nominate someone quickly," said Ebell.

But it isn’t clear whether filling the White House job is a priority.

The administration has "a whole host of slots to fill," said Ana Unruh Cohen, director of governmental affairs at the Natural Resources Defense Council. "It doesn’t seem like pushing or finding nominees is really a priority for them. I could see this one languishing."

Shepherding another nominee through the confirmation process could divert resources from an already overloaded staff at a pivotal time. CEQ is playing a key role in devising Trump’s infrastructure initiative and snipping environmental laws where possible to hasten permitting. That’s the focus of the president’s second year.

Another explanation is that CEQ’s work has continued apace, even if its relatively slim staff is taxed. Many inside the administration believe the acting chief, Mary Neumayr, is capable of steering the council in the interim.

Privately, administration officials have said they believe CEQ’s work can continue without a Senate-confirmed boss.

"The good news is that CEQ is well staffed even in the absence of a chair," said Segal of Bracewell. "Current CEQ staff includes a range of experience from past administrations, Capitol Hill and the private sector."

Much of the council’s focus revolves around the National Environmental Policy Act, which Trump wants to tweak to achieve his goal of greenlighting major infrastructure projects using "one federal decision."

That is a complicated task requiring coordination across the federal government, industry representatives said, adding that continuing without a chair would hamstring the agency.

"CEQ administers NEPA and is a critical voice at the table for this year’s anticipated debate over an infrastructure package," Ross Eisenberg, vice president of energy and natural resources policy at the National Association of Manufacturers, said in an email. "We believe a strong CEQ is vital to accomplishing the Administration’s goal of ‘one federal decision’ for infrastructure permitting, and for administering the permitting process quickly, efficiently and safely."

The absence of a confirmed leader could complicate the agency’s work, Goldfuss said.

"They could go the entire time without a chair at CEQ," she said, "and I think what will suffer is their priorities under infrastructure, because that’s clearly what they have tasked CEQ to do, and without leadership there, it’s less likely that they’ll be able to pull together a package that stands any muster."

Some have suggested in the past that CEQ cannot take certain actions without a Senate-confirmed head.

Senate Republicans criticized the Obama administration when CEQ issued directives under NEPA without a Senate-confirmed chairman. Sen. Jim Inhofe (R-Okla.), then the Senate Environment and Public Works Committee chairman, slammed the agency when it issued guidance on greenhouse gases without a political boss.

Others say Hartnett White’s derailment shows the limited appeal of nominees who openly tout alternative climate science. The GOP’s grasp on the Senate weakened with the election of Alabama Democrat Doug Jones, and some Republicans care enough about climate change to push back against candidates who hold contrarian views, said Unruh Cohen.

"That she had such an extreme view of climate science and attacked it so much just shows how far out of the American mainstream she was, and that was part of what made her untenable for the now 51 Republicans in the Senate," she said.