Slain Yellowstone-area cougar taught us a thing or two 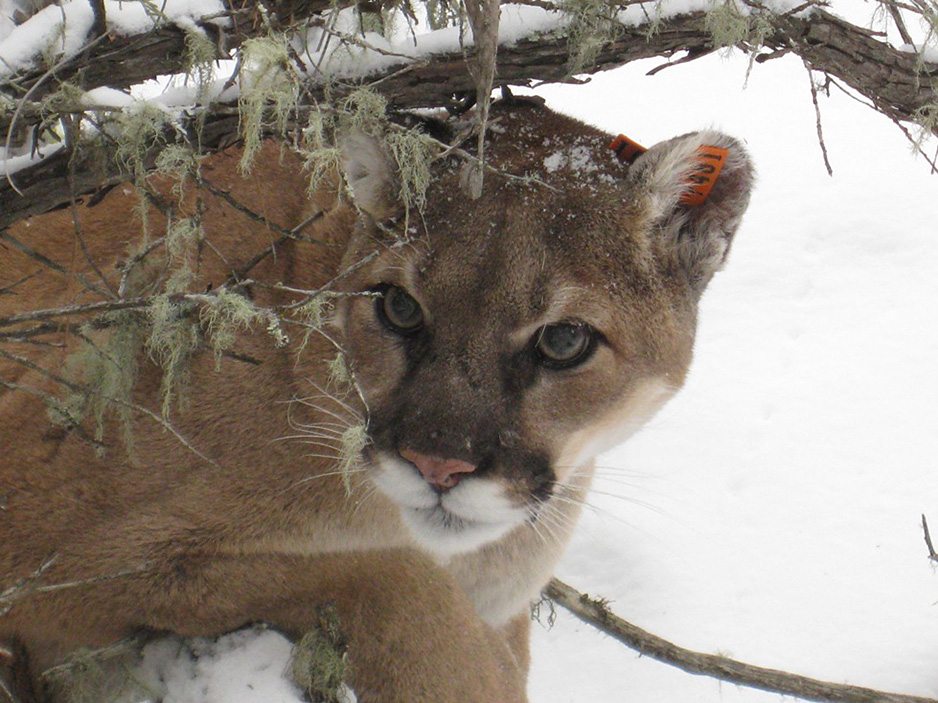 A tagged mountain lion in 2011 at the Charles M. Russell National Wildlife Refuge in Montana. Gov. Greg Gianforte (R) shot and killed a different mountain lion, M220, that was being studied by National Park Service biologists. Fish and Wildlife Service/Flickr

Fixed with a GPS monitoring collar, M220 prowled in and out of Yellowstone, unaware of the invisible information stream he was transmitting, sometimes on an hourly basis, to National Park Service naturalists who’d been following him since he had been captured and collared on Dec. 11, 2019.

Stahler’s written summary was made public by the park service in the wake of questions arising from the mountain lion’s death.

Stroyke said that “as the group got closer to the lion, members of the group, who have a hound training license, used four hounds to tree the lion once the track was discovered in a creek bottom on public land.”

Stroyke said that after the lion was treed, Gianforte confirmed it was an adult male — called a tom — harvested it, and put his tag on it. He then called to report the kill to a state game warden.

“In Livingston, the governor met the game warden who tagged the lion and took the collar,” Stroyke said.

Stahler’s report provided more context and detail about the data provided by M220 and the circumstances of his death.

Judged to be about 3 ½ years old at the time of his capture in 2019, based on an examination of his gums, and then weighing about 130 pounds, M220 was recovering from a wound apparently suffered in an earlier encounter with another hunter when he crossed paths with Gianforte on Dec. 28.

A local resident reported to Stahler that a radio-collared male cougar was injured in the Tom Miner Basin area by a hunter around Dec 12.

“Cougar M220’s locations were confirmed in Tom [Miner] Basin on that date,” Stahler reported. “He spent some days in the same location in Tom Miner, but eventually began traveling again, indicating he had survived what may have been only a minor injury.”

M220 subsequently traveled south toward Yellowstone and looped into the park, but then ventured north into public land outside of park boundaries in the Rock Creek area, where Gianforte’s hunting party found him.

The cougar’s territory was largely within the park in the year after he was collared. The collar was programmed to take location data every three hours, except during predation season in winter, when it was hourly.

“He was documented associating with at least two different GPS collared adult female cougars inside YNP, suggesting he was a breeding male inside the park during 2020,” Stahler recounted, adding that “genetic studies are still pending to determine M220’s breeding contribution to the population.”

Inside the park, M220 would routinely trigger remote cameras used to estimate populations.

During 2021, M220 began moving north of the park more consistently, with Stahler speculating that it might have been in response to conflict with other territorial males or perhaps it was a search for more breeding opportunities.

M220 began spending “considerably more time outside YNP in the latter half of 2021,” Stahler noted.

Wildlife biologists have estimated that up to 45 cougars inhabited northern Yellowstone from 2014 to 2017.

Since 2015, the Yellowstone Cougar Project reports that monitoring has “demonstrated that elk make up nearly half of cougars’ diets in Yellowstone, with deer a close second.” Cougars also prey on pronghorn, bighorn sheep, mountain goats and smaller mammals.

Their GPS collars have “built-in accelerometers” that allow biologists to measure behaviors like hunting, feeding and traveling, as well as the energetic expenditures of cougars, the project’s website notes.